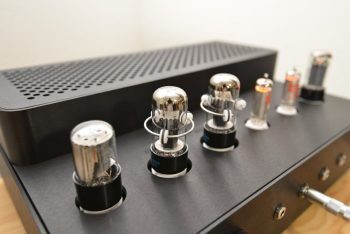 The courier, towel wrapped around his neck and sweating profusely arrived at the door with the huge box. Not at all new to such things arriving at my door, he handled the box as if it only contained a feather, unlike myself as I carried it carefully through to my room. The big, black aluminium beast was easily extracted from the neatly cut foam to my rack.

Six sockets and … more than 6 tube boxes. 4 kinds of tubes and a few minutes of pulling tubes out and figuring out where they go, with only the skinny OB2 rectifiers being obvious, I had the amp ready to go. But not myself, as I had to head off to work. I did leave it and my DAC switched on so I could return later and they would be nicely warmed up, ready for listening.

Danny from DITA Audio once said to me, that being a dedicated audiophile isn’t about owning gear that is good enough, it is about gear that is better than good enough.  To design an amp, or any piece of gear for that matter, that sets itself truly above the many that are available, not just in price, requires great skill and dedication. Head-Fi members insist that such equipment lives up to its price as well. Thus a top-of-the-line amp from ALO Audio was both unexpected and raised many questions. The answer was that the amp is designed by Thomas Martens in conjunction with ALO Audio, and has been in development over two years before it was announced.

The amp itself is a tube-rollers delight. The tubes range in what they can potentially cost, from the inexpensive OB2s and 6V6s to the 6SN7 and 5AR4 which can range from cheap to highly expensive.

Not surprisingly, ALO Audio, as well as Audeze, offer a complete package of headphones, amp, tubes and cables (if not source). For a high-end one-stop kit for someone already with a high-end source it most definitely delivers as good as you can get, and you can have fun rolling tubes to your tastes too.

Initially, I listened for some days, swapping tubes around as I did so.  I found that the main benefit of rolling in NOS tubes is more towards clarity and a lack of harshness, as the amp isn’t “tubey” sounding as such, being more precise-sounding than any solid-state amps I’ve owned. The amp really comes to shine the most when at least NOS 6V6s are used in place of the included TADs and good choices are made with the other tubes. Installing a Mullard metal base GZ34 as the rectifier, for example, raised the performance level another notch on top of what a Sylvania 6SN7 “Tall Boy” and GE 6V6GT tubes had already done.

Leaving all Mullard in the OB2 and 5AR4 slots (the Raytheon OB2s seemed to induce some harshness to the sound) I could tune in fairly predictable degrees of flavour by swapping the 6SN7 and 6V6GT tubes with others. Chrome-top Sylvanias gave their usual neutral smoothness. A Sylvania “Tall Boy” 6SN7 and Phillips 6V6GTs neutral precision. The 5692 brings in some liveliness and aggression, the penalty being a touch of hardness to the sound. Tung Sol a touch of sweetness at the expensive of precision. Brimar 6V6GTs bring warmth, which was nice with HiFiMan’s HE1000 V2, but the Utopias revealed their imperfections too much.

With an adaptor I could switch around 6922 tubes in place of the 6SN7. When I could get it to stop ringing enough to listen, an Amperex PQ was a match for the Tall Boy. Another adaptor had a Western Electric 396A in the left slot, a great tube for making less lively-sounding amps more dynamic. 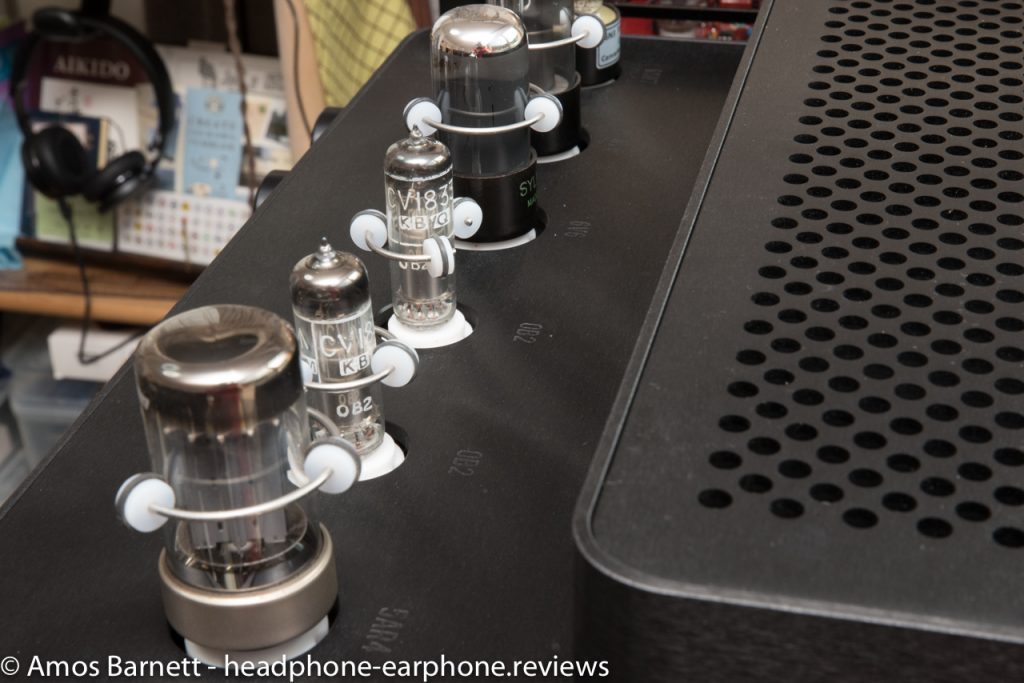 I reached a point that I had a good picture in my mind of the amp, but was initially stuck at finding a way to describe my impressions. I wrote: “What I am hearing is excellent — the music — but delivered with a high level of detail and in a manner I would describe as absolute, that is, with an unapologetically accurate attitude that shows you exactly how the music is from the lowest bass note up to the highest treble. Not only the capabilities and flaws of the music but of your headphones as well.”

Top-quality SET amps have a reputation for their ability to deliver music with a delicious authority and the Studio Six is no exception. Initially I thought that the soundstage was smaller than my regular reference amp, the Audio-gd Phoenix. However, comparing them showed that it was the other way around: The Studio Six was delivering the music so precisely that I was hearing the music exactly as it was, and exactly as everything else in the rest of my system was capable of delivering it.

With well-recorded small jazz or classical ensembles the exact position of every instrument is there in your mental vision. One of my favourite jazz albums, David Chesky’s The Body Acoustic, an album of dark latin jazz is delivered with a precision that doesn’t slack off for a single note. If the venue was small, then, within the limits of your headphones, the impression is of that. If it was in a concert hall, then a concert hall you get.

Poor recordings are spared nothing, and I was sad that Martha Argerich’s performance of Sergei Rachmaninoff’s Piano Concerto No. 3 in D minor was not spared having the so-so quality of its recording revealed. Van Halen was going to be out of the question too. Any even moderately compressed pop, such as Jack Johnson was going to reveal itself clearly as such. I love Elbow’s The Seldom Seen Kid, but some of it was a bit harsh.

The treble, which I’d already determined was delivered well with the NOS tubes and my Magnums was equally so with the HD-800s, only the Utopias clearly revealing the distortions of the 5692 and Brimar 6V6GTs. It was the bass notes I was more interested in, however, as I wanted to know if they were as tight as with other headphones. The cello on What Am I Gonna Do With You Aime? (Kenny Rankin on Chesky Records 10th Anniversary album) was delivered with the kind of clarity I expect from high-end speaker systems. 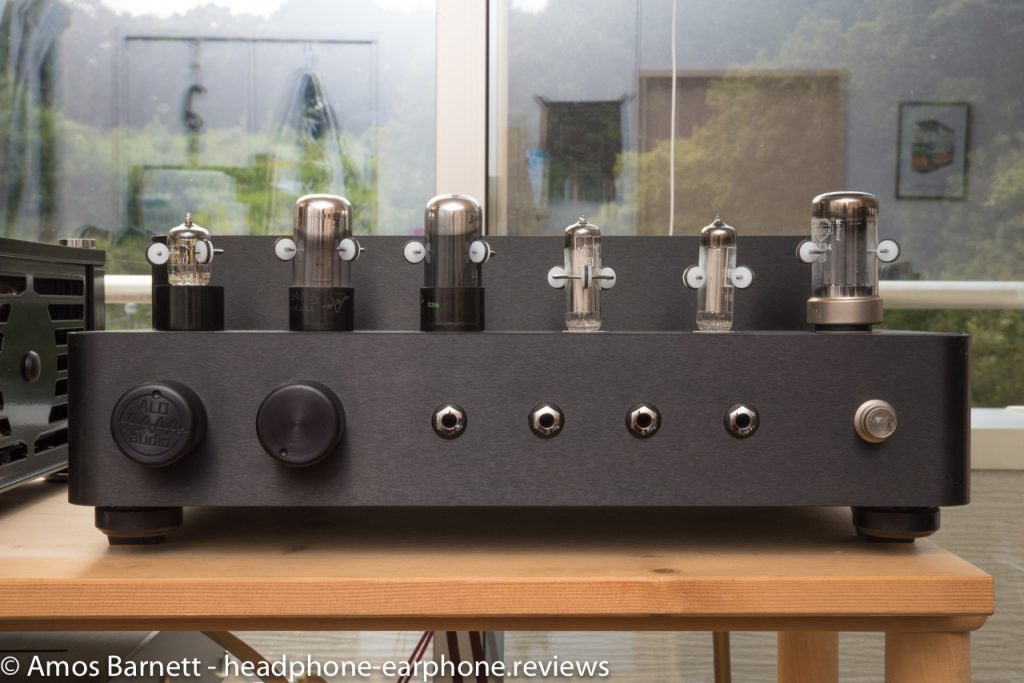 Playing very fast and complex, yet very well recorded music, such as Friday Night in San Francisco (HDTracks), the unrelenting detail, without the slightest let-up was overwhelming.  Because the amp doesn’t lose even the minutest amount of composure during complex music, the extreme details even during complex musical passages — super fast guitar riffs, fast drumming, multiple instruments playing all at once, everything is elevated to yet another level, with the Studio Six delivering the full degree of textural information.

Binaural recordings from Chesky Music, such as Amber Rubarth’s album, were phenomenal, with every sound produced in the entire venue, down to the birds chirping outside, were delivered with absolute precision. Changing any component in my system, I could hear precisely how it affected the overall experience.

Of course, Chesky’s latest binaural recordings are perfect for this high level of headphone rig, but I didn’t expect the waves of echo from the room walls to hit my ears so clearly as they did from C.C. Colletti singing You Shook Me (All Night Long).

Extreme dynamics — extreme micro-detail dynamics. Because the amp doesn’t lose even the minutest amount of composure during complex music, the extreme details even during complex musical passages — super fast guitar riffs, fast drumming, multiple instruments playing all at once, everything is elevated to yet another level, with the Studio Six delivering a degree of textural information that is overwhelming. 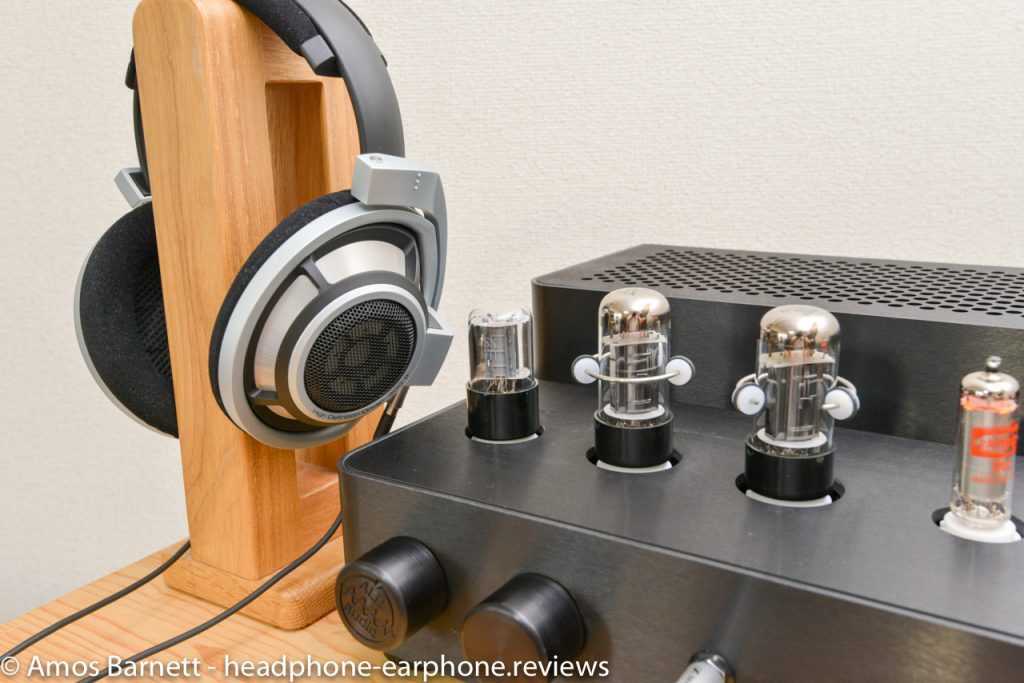 The performance of the amp is so unwavering that even if one plugs 4 completely different pairs of headphones in, even IEMs, the performance through any single pair does not change in the slightest. The question I had at the end of it all was not about whether the amp is worth it, but why it didn’t have speaker outputs. Ken Ball’s reply to this question was to send me a custom cable with a headphone plug on one end and speaker banana plugs on the other.

In fact, initially I didn’t like the presentation with my LCD-3s or HD-800s. However, swapping the interconnect I regularly use with tube amps, Van Den Hul The Orchid, which is Nordost-like aggressive, to ALO Audio’s own Reference 20 or Moon Audio’s Silver Dragon, changed the character subtly but enough to make the other headphones enjoyable.

Electronics have caught up over the years, and I’m now in possession of Chord’s excellent Hugo 2, which for most headphones seems to make the need for a high-end amp redundant. But so too have headphones improved, with one of the most significant being Focal’s Utopia with performance another level up from most dynamic headphones. While the Studio Six brings only a slightly greater degree of dynamics and precision to most of my headphones, the Utopias, similarly  absolute reflectors of gear quality and performance, were elevated to an unmistakably greater degree by the Studio Six.

The main downside to the Studio Six is that it doesn’t have enough power for HiFiMan’s Susvara. With only 1W of maximum output it covers pretty much all headphones except those and the HE-6.

Thanks to Ken Ball at ALO Audio for kindly lending “Team Tokyo” the amp and cables. I ended up buying the amp, and years later I’m still using it.

This review was updated in 2017 to include impressions with newer headphones.