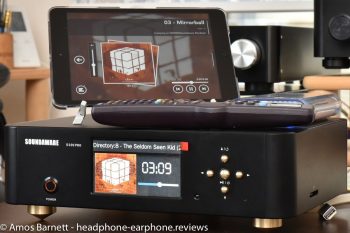 Danny from Dita Audio tipped me off that I should check out Soundaware and that they had some pretty clever technology. And so it was that Mary from Soundaware contacted me about sending me both  the M1 Esther DAP and the D100Pro music server for review.

Opening up the box revealed a fairly standard, but attractive aluminium device, unusually with three pointed aluminium feet underneath. Along with fairly comprehensive instructions that suggested that the best sound quality would be achieved after the front screen had switched off suggested a company familiar with audiophile nervousa of the type that wont relax until the basic tweaks are taken care of. As I’d had positive experiences addressing noise and vibration in various components, the attention to detail in this manner I greeted positively.

Along with the server itself is a universal remote control which, due to the excessive number of buttons on it requires consultation with the manual to make sense of initially. This becomes all the more necessary if the screen is used to browse folders, as knowing that the channel buttons can jump a whole screen up or down is important when it only shows 5 lines.  Ideally one will control it with DLNA software on an iPad, or stream to it using Airplay, especially if one has a lot of music. 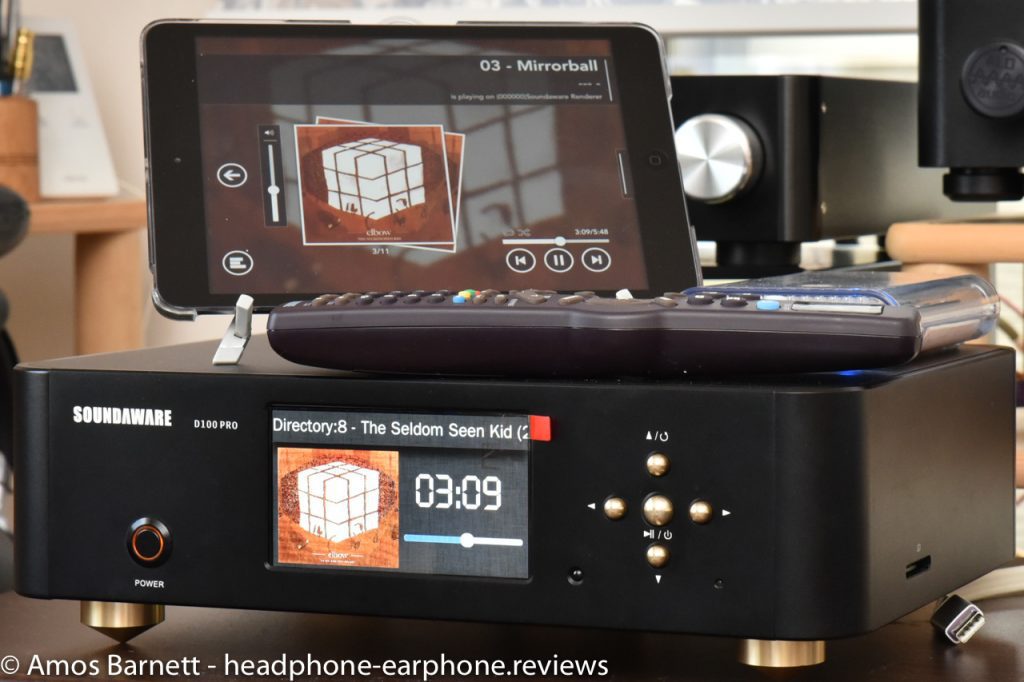 Plugging in and setting up the D100PRO was straight-forward. However getting it to play music turned out to be something of a problem. The D100PRO can accept an SD card or FAT32-formatted hard drive or thumb drive plugged in with music, or it can stream music from networked attached storage or a computer. However, if not Airplay, network shares only set up to work with NTVLM1, which is now only found in Windows XP or Windows 7, which are the most common in China. Since we’re now two whole versions of Windows later in what is current, this is a surprise. Airplay is also limited to CD Quality if used from a Mac.

I had a shot at loading up a Windows 7 virtual machine, which instantly recognised the D100PRO as a media device. I thought I’d scored lucky when Windows Media started loading files from it over the network, but then it stopped at about 250 files and didn’t load all but a few into albums or show the artists for them. So much for that.

I also tried JRiver Media Center on my Mac. It noticed the D100PRO as well, but wouldn’t load the library, showing an error instead.

I figured the easiest thing to do was to copy my Music folder from my Mac to a spare hard disk, formatted as FAT32 or ExFAT (the latter now supported in the latest firmware). This was fine, except it turns out that the D100PRO doesn’t support ALAC or AIF files above 44.1kHz, despite supporting everything else. So after waiting 4 hours for a few hundred gigabytes of music to copy, I can’t play most of it. Eventually, after a lot of mucking about and frustration, I copied all my HDTracks, Linn, Society of Sound and other FLAC files to the drive and used those instead, as well as the SD cards that I use in my portable players. Sometime later, I batch-converted my entire library through X Lossless Decoder (XLD) into FLAC and put that on the drive to use.

Since the D100PRO’s front screen only shows 5 lines when browsing, I took the advice inside the manual and downloaded 8player and ArkMC onto my iPad. These allowed me to both browse and play back files on the unit — effectively remote-control it, with much better results. Occasionally 8player would lose its connection with the server, which if in the middle of playing music, would make it impossible to turn the music off without either re-connecting to the server, or turning off the server at the power switch. The problem was that if remote software is being used to control the D100PRO, the front panel controls and remote control no longer function. ArkMC on the other hand wouldn’t read a directory that had more than a couple of hundred of files or folders in it, and 8player was slow to read more than a couple of screens of files from a directory, I split up my library once again into multiple folders. The irritations weren’t over then, as I discovered that if you are browsing folders during playback, the music can start skipping if you have a slow drive. Going by the activity light on my external drive case, it is reading the music directly from the drive rather than caching it. Time for an SSD or hybrid drive I guess. 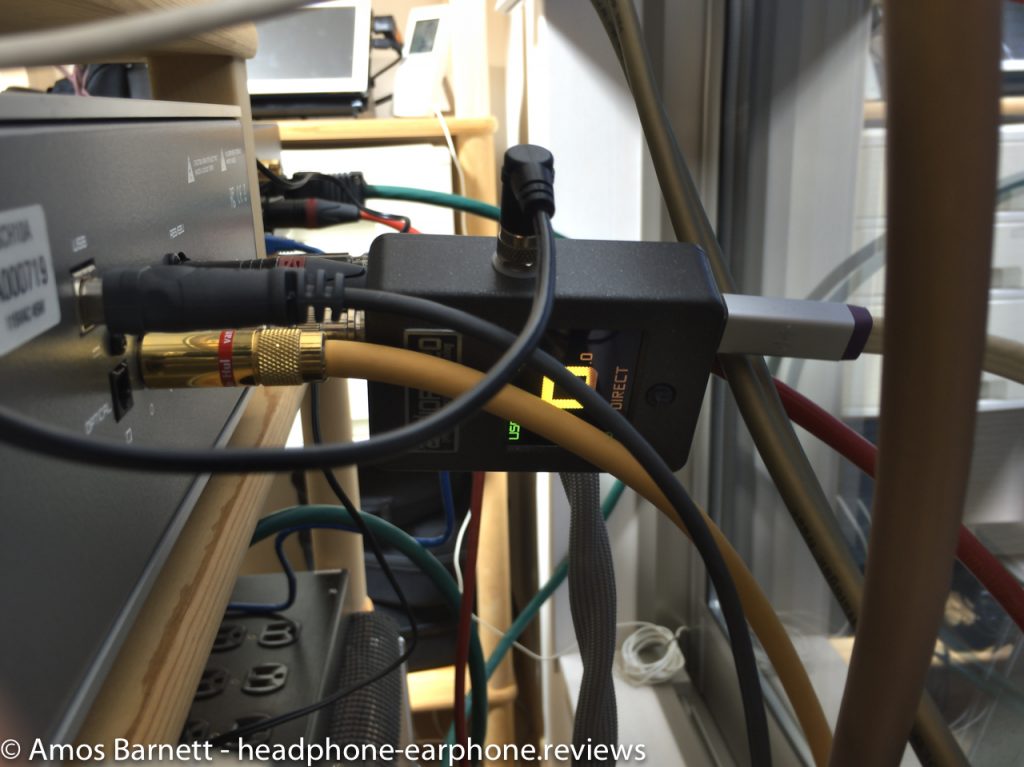 As my main DAC at the time of arrival, the Chord Hugo is let down by a lack of galvanic isolation on its USB input, allowing noise into the DAC and a bit of harshness coming out the analogue end as a result. I had been using the Chord Hugo with an Audiophilleo 1 + Pure Power and also via USB via a Schiit Wyrd, the latter of which by itself brought the Hugo closer to the performance with the Audiophilleo without the expense. With the D100PRO I would be using the Hugo via coaxial S/PDIF. Some time ago by chance I’d scored an incredible deal on a couple of Harmonic Technology Magic Digital II BNC-terminated S/PDIF cables. Whereas I’d usually use a Van Den Hul coaxial or triaxial interconnect for this purposes, since they are all 75 Ohm, the HT had proven in the past to be a step above those.

With everything finally set up, first impressions of the D100PRO with the Chord Hugo were surprising. It is going to sound like a cliché, but every piece of music I put through the D100PRO to the Hugo was rendered with a relaxed, but detailed smoothness that made listening an absolute joy. Talk Talk’s Spirit of Eden, not the most pristine of recordings, but lovely to sit back and listen to in its entirety was presented as a high-quality recording.  Patricia Barber’s albums can, likewise, be a bit hit-and-miss. I have trouble understanding why some are available on SACD when they have what appears to me to be obvious recording flaws. Whenever I listen to them, in the back of my mind is the less than perfect treble (and maybe why given most DACs are softer-sounding with DSD they sound more pleasing). But now, on the D100PRO the sonic result is simply wonderful, the sound lacking any harshness, instead letting through glorious micro-detail. It had me wondering if I have been wrong the whole time about the recording and mistaken about their quality.

Moving onto high-qualility binaural albums from David Chesky and HDTracks or Bowers & Wilkins Society of Sound revealed even more enjoyment and glory to be had. Vocals from Amber Rubarth, C. C. Colletti and Alexis Cole are presented with a clarity, and instruments are so precise, yet in a way that is so un-forced that more as if the equipment disappears and leaves only the music, which is what I’d been wanting out of the Hugo in the first place.

Upon the arrival of a Schiit Yggdrasil, which I bought with the intention of it replacing the Hugo in my main rig, I had the chance to do another round of testing. Initially I was running the Yggdrasil via a (possibly unnecessary) Schiit Wyrd from my MacBook Air, which runs Audirvana Plus. Playing a whole track repeatedly from the two different transports showed that the D100Pro the clear advantage, the USB set-up making music sound more flat and less “real”. These differences were apparent whether I was playing Julia Fischer & Milana Chernyavska’s Sarasate or Massive Attack Protection to give but two examples of the very eclectic range of music I listen to. 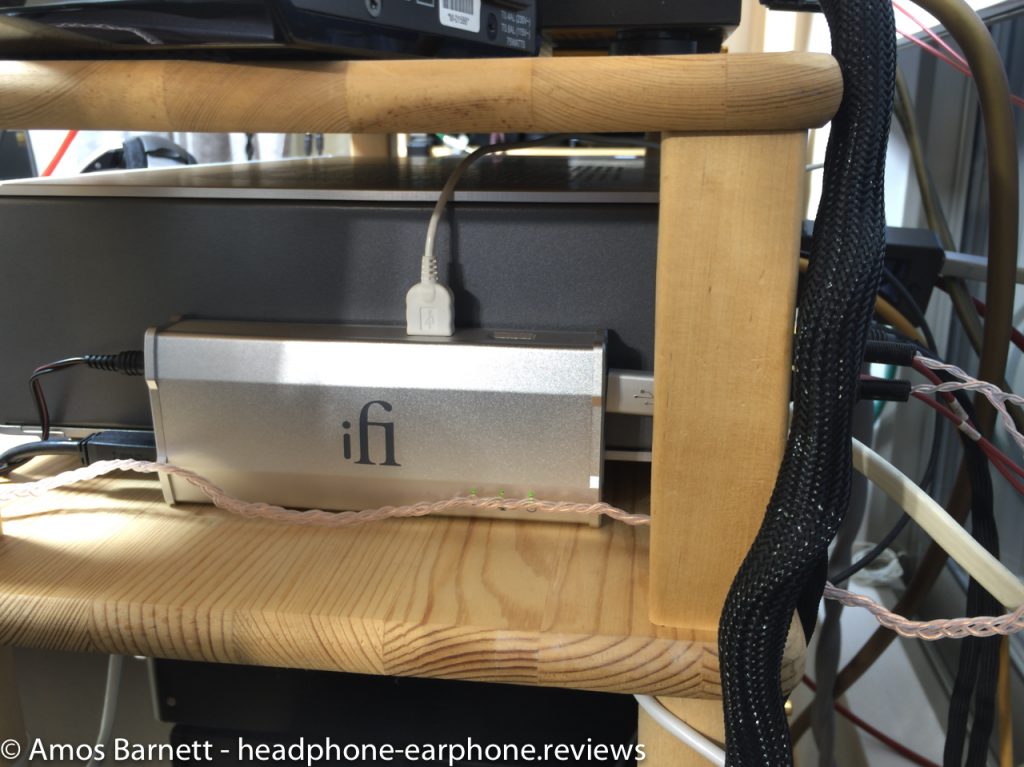 This left me feeling that I would miss the D100PRO once my review period was over, so I decided, upon reading positive experiences of it to buy an iFi iUSB 3.0. I promptly battled it off against the D100PRO using the Yggdrasil. Choice of weapons in this case Eiji Oue and the Minnesota Orchestra’s Bolero! Orchestral Fireworks. Berlioz: The Damnation Of Faust – Dance Of The Sylphs was my particular focus for much of the testing after I ran the iUSB 3.0 in for a few days. Again, however, while the iUSB 3.0 came so close, it could not match the ability of the D100PRO to extract the most out of the digital file and deliver it to the DAC. The subtle textures of the violins and other instruments and the notes coming from them were simply more palpable with it as the transport.

Upping the ante to using my Audiophilleo 1 (with Pure Power) fed by the iUSB 3.0 through the coax input, I could almost match the D100PRO, but listening to Horowitz in Moscow the DP100PRO had just that fraction more weight and clarity to piano notes to the point I felt I could feel the heft of the hammer hitting the string. I tried the same comparison with Larry Coryell, Badi Assad & John Abercrombie’s Three Guitars and my feeling was that the D100PRO brought through better separate of the individual guitar plucks, whereas with my iUSB3.0/Audiophilleo/Pure Power combo the notes were very slightly more blurred. 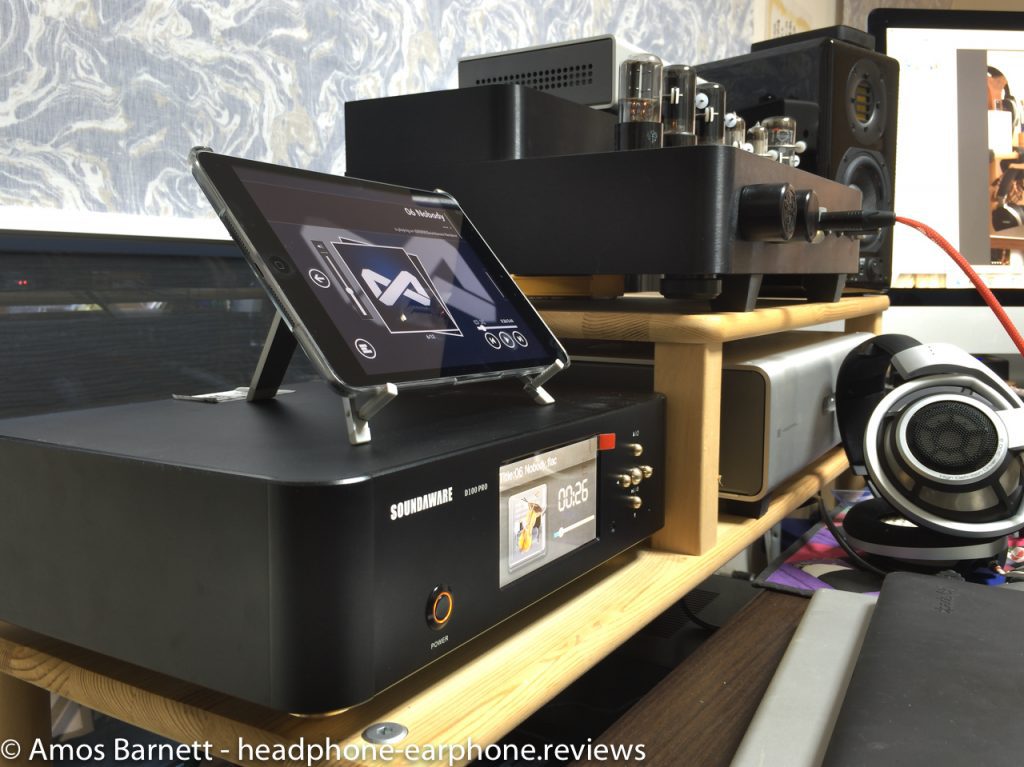 Ultimately this has left me feeling that the D100PRO is something of a conundrum. When I was listening to music, it was fantastic, bringing the Chord Hugo and Schiit Yggdrasil to a level I felt it hadn’t been to before besting Schiit Audio’s latest USB implementation, and even vastly more expensive USB-based tranports. However functionality-wise it was somewhat frustrating. If you’re OK with, putting your music on an old Windows XP or 7 machine, NAS box, or plugging in a USB hard drive or SD card, and are happy to play by album, or set up playlists in 8player (or other software if you can find an app that works), if your DAC benefits from it’s ability as a source, you’ll find it to be a fantastic transport. However if you’re like me and want to stream your music from your Mac, you’re limited to CD quality over Airplay, unless you install a DLNA server such as Serviio and an iPad or similar to control the set-up.