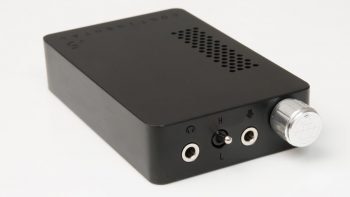 A few years ago I remember meeting Ken Ball at one of the Tokyo headphone festivals when he had announced the RX3-B balanced portable headphone amp. All the rage at the time, the amp was challenging some desktop amps when it came to driving headphones. However one of the nicest amps at the show was the original Continental hybrid tube/solid state amp. With a touch of warmth and a fair degree of effortlessness it was a popular amp.

As getting the tubes was troublesome, the amp was available only periodically. As time went on, it saw changes and improvements to the design and is now in its 5th iteration. Unlike previous versions it is considerably smaller, holding the same outer dimensions as the latest Rx, though slightly thicker.

That extra girth holds a single Philips 6111 tube, unlike the Continental Dual Mono, which holds two. With the usual format of input and output on the front, the amp sports two gain settings of -10dB and +10dB for full-sized headphones, which seemed to cover everything I tested quite sufficiently. Charging is via a micro-USB socket on the back, and LED next to the tube, visible through the holes on the top, indicates the charging state. The volume control includes the power switch.

The compact design is, not surprisingly, well suited to stacking with the current flavour-of-the-year, the Chord Mojo.  ALO Audio is very familiar with stacked portable rigs, and for this purpose a couple of branded rubber bands are included.  A basic USB to micro USB cable and 300 mA charger are also included, along with a very basic carrying pouch and a leather case and a warmer-sounding tube are available as options. For this review I only used the stock tube. 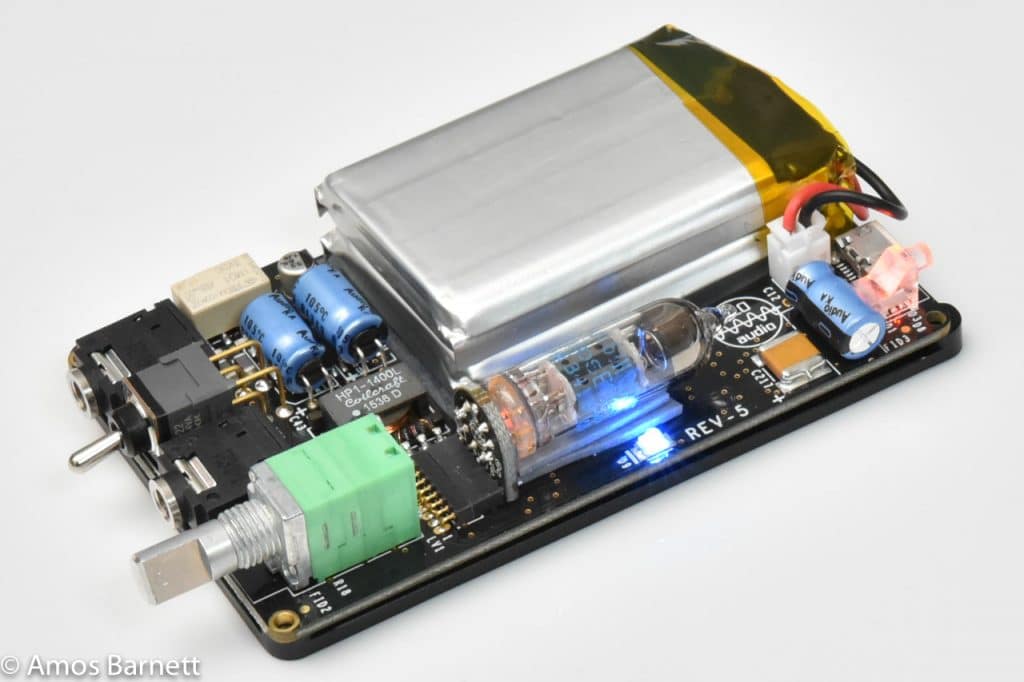 Powering on, there is a 20 second delay while the tube warms up, a blue LED glowing from within the case. After the LED goes out, listening is possible. To this end I tried a variety of headphones, from the HD800, MrSpeakers Ether Flow and HiFiMan HE1000 V2, as well as various balanced armature and dynamic IEMs.

Immediately apparent was that the Continental V5 could deliver good dynamics even into the big planars. MrSpeakers Ether Flow gave it no trouble at all, so I upped the anti and tried the HE1000 V2. While it didn’t deliver quite the space of the Studio Six, it did a surprisingly good job, easily enough for me to forget what I was listening out of.

With sensitive IEMs such as ALO Audio’s own Campfire Andromeda, there was too much hiss, even on low gain, to be ideal. Less sensitive BA IEMs such as the Ultimate Ears Reference Remastered were fine, but I didn’t feel that I got any benefit from the Continental V5 over whatever source I was using if it was already good enough with them. It was dynamic IEMs and full-sized headphones where I was most impressed.

Like the Rx that came before it, the Continental V5 was designed by Vinnie Rossie (of Red Wine Audio fame) and has a complex power supply with output via a Texas Instruments headphone amp. Unlike the Rx the power output is much higher, at up to 325MW, and the gain stage uses the above-mentioned 6111 tube instead of an opamp. That set-up is obviously where the dynamics were coming from. What was surprising was the level of detail retrieval easily had me separating out the capabilities of various sources, despite the specifications of the amp not suggesting this.

I had thought, for instance, that FiiO’s X7 with the un-amped AMO module might make for a good source for the CV5, the amp acting in place of one of the amp modules. However while it does, I had been using the Continental V5 with my Schiit Yggdrasil and the drop in detail going to the X7 was very apparent, as well as the DAP’s more aggressive sound. I wonder if the warmer tube might be a good combination there, especially as the optional amp modules for the X7 carry this through as well. 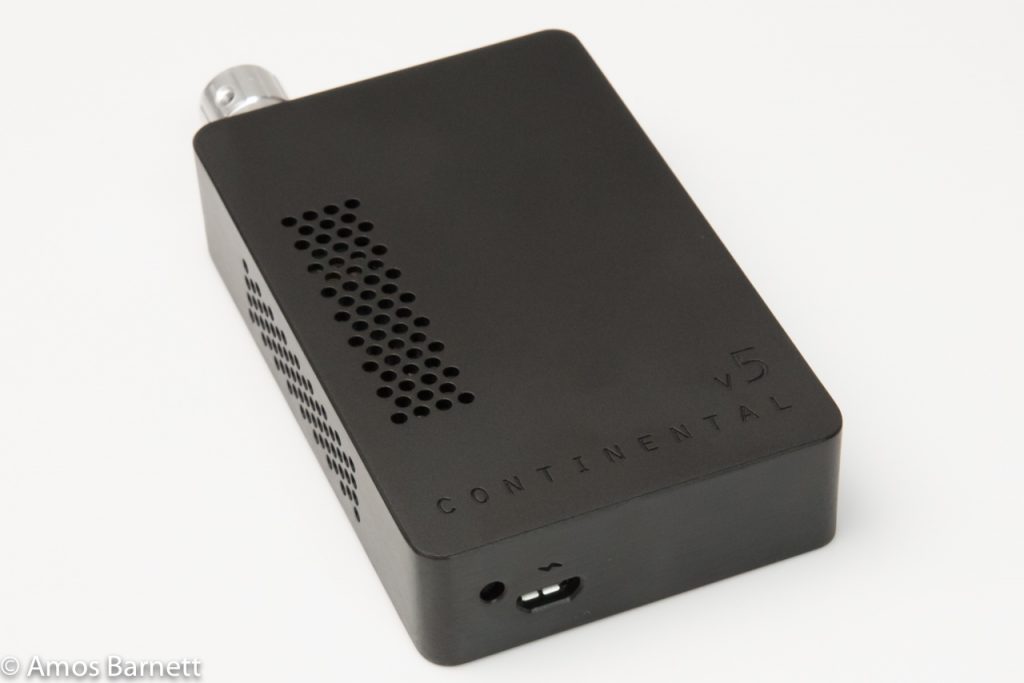 This lead me into a paradox. The Continental V5 was too good in many respects for a lot of gear I have here at the moment, yet the more resolving DAPs and DACs like the Mojo and AK380 already have very good amplification. That lead me on something of a search for useful devices to pair with the Continental V5.

Soundaware’s M1 and M1 Pro portable players, while quite warm-sounding, have a high output impedance and fairly limited headphone driving ability. With the CV5 in the chain, I could enjoy the warm and relaxing sound of the M1 Pro with full-sized headphones or demanding dynamic IEMs.

Another interesting device is the new Cozoy Rei portable DAC. An almost tiny, phone-powered device with around 35MW of output, it is quite suited to IEMs, but not at all anything demanding. Once run-in, the Rei made for a great source with the Continental V5, even if it isn’t as detailed as some of the DAPs I tried, to the point I ended up spending quite a bit more time listening than I had previously planned with the combination, both through my iPad and my MacBook. The smooth, even presentation of the Rei worked nicely with the dynamics of the CV5, especially with the more picky planars I had on hand. 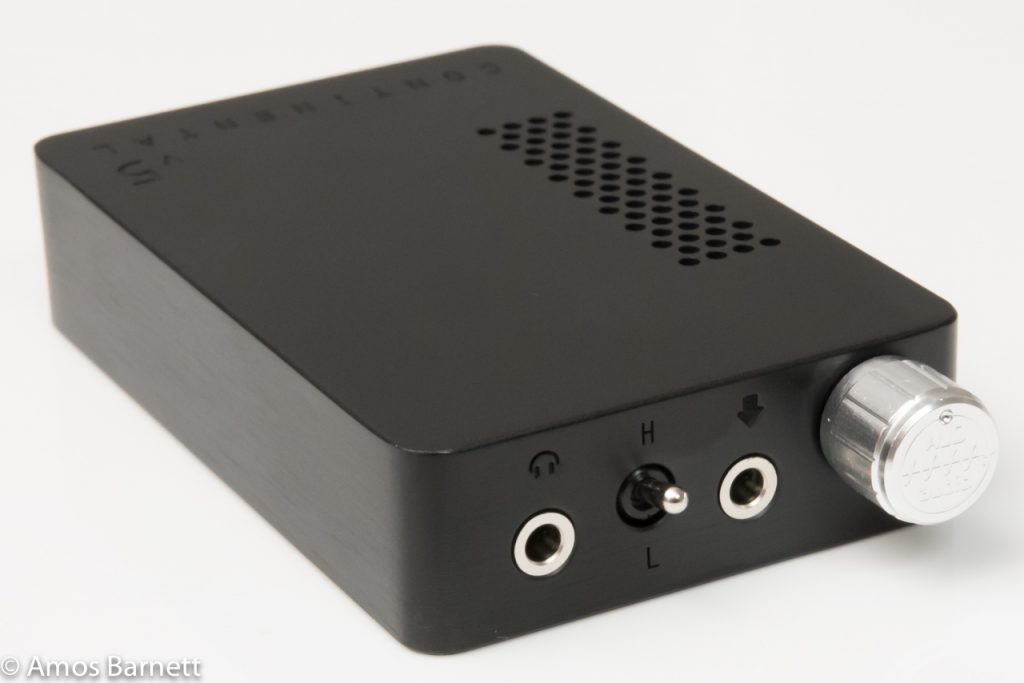 In the end I came back to listening through the HE1000 from my iPad via the Mojo and Continental V5. While it was a step down in micro detail from my main system, a lot of the music I like simply doesn’t have that much to begin with. Most importantly, I could turn the volume up a bit and get plenty of enjoyment, especially that of the great depth that the Mojo can resolve from the music when used as a DAC.

The strongest competitor to the Continental V5 in my inventory is HeadAmp’s Pico Power. A far simpler design of a buffer and 3 transistors per channel, it’s driven by two regular 9V batteries. With three gain levels it is more flexible as it works even with sensitive IEMs, but can’t be charged externally. It is also the more neutral-sounding amp. While the Continental V5 is more relaxed, spacious and warm-sounding, the Pico Power is more up-front and forward. Between the two, I’d be hard pressed to choose, and it might come down not only to the presentation, but simply that I’ve forgotten to switch off the Pico Power a number of times and ended up with flat batteries, something less of a problem with the Continental V5.

A few years ago to get a big sound and plenty of dynamics out of a portable rig, you pretty much had to buy one of the balanced amps and get your headphones or IEMs re-cabled. Now more often with components like the Continental V5 and Mojo, I’m feeling less and less that anything so complex as a balanced DAP or amp is necessary for high resolution. While the price, at over $700 is big ask for a portable amp, the Continental V5 packs very satisfying ability to deliver music to even quite demanding headphones, and can be used to build a compact and very capable portable rig. What is more, no longer is there the need for a major cable investment to do so.