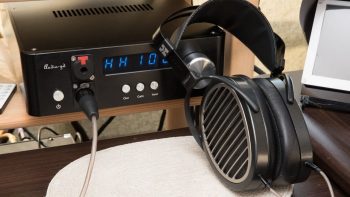 Whenever I think of the number 11 in audio, the famous “turn it up to 11” scene from Spinal Tap comes to mind. While I don’t think that that was what Kingwa (He Quingua, the owner of Audio-gd) was thinking when he named the amp, the first balanced amp I had from him, the Phoenix had a volume control that went up to 99. It may well have been the first commercial headphone amp to use relays and resistors to control the volume via a rotary encoder and digital controller.

The NFB-1AMP reminds me a lot of the Phoenix, given that it is in the same size box as the Phoenix was, albeit a one-box solution compared to the older amp’s two-box system in the manner of a Mark Levinson design. 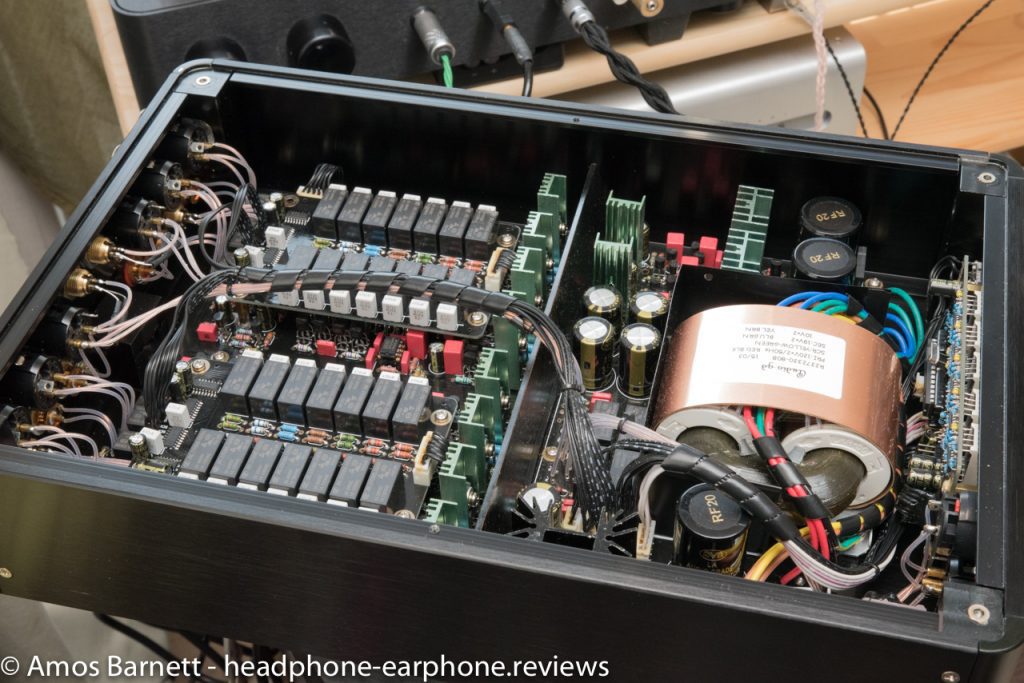 While little seems to have changed over the years, Audio-gd amps spotting multiple inputs, pre-amp output, digitally-controlled resistor-and-relay volume control and Audio-gd’s own take on a current-gain amplifier, incremental improvements have kept Audio-gd’s products competitive. Not needing to spend vast amounts on marketing, promotions and fancy cases make their products quite a bargain. What is more, I’ve discussed with Kingwa the efforts he makes to find good workers and subsequently take good care of them as individuals, both for their sake as well as to ensure the quality of the final product.

Recently, Audio-gd has shared the benefits of the changes in exchange rate and lowered the price of their products, making the NFB-1AMP even more affordable.

Audio-gd’s balanced products are ideally intended to be used at least with the balanced outputs, especially with headphones, as the single-ended outputs wont utilise half the electronics. Instead Audio-gd usually provides single-ended versions of their products designed for people who don’t have headphones with a balanced cable and don’t want to re-terminate theirs.

However the single-ended inputs still gain the benefits of the balanced circuit, so if you have a source that has a single-ended output only, there is nothing to lose from the design.

If you have a pair of headphones already with a balanced cable, such as from Audeze or MrSpeakers, or a pair of active monitors, then once you’ve got a DAC, you’re all set with a great desk rig. Audio-gd’s matching DACs, along with their amps, share the ACSS connection system, intended for higher-quality signal amplification and transmission. Externally it connects the current-gain circuits between components, bypassing the conversion to and from voltage transmission and negating any concern about what interconnects to buy as the cables can be ordered from Audio-gd.

The way this works, as I understand it is this: Regular audio signals are transmitted as changes in voltage, with a set amount of current. Every single component in a piece of equipment adds at least a tiny bit of distortion to those signals as a consequence of them passing through. By transmitting and amplifying the audio as changes in current instead, less distortion makes its way into the signals. As well, the volume control, which would usually be at the input, is instead at the output of the amplification stage, acts as the current-to-voltage converter before the final output stage, lowering distortion further still. 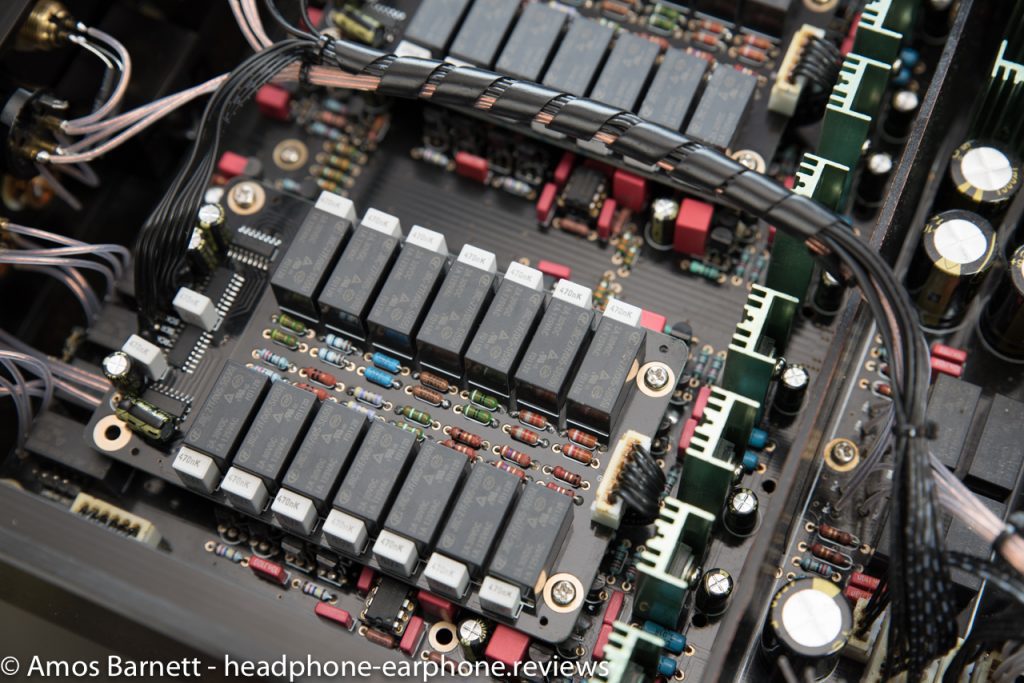 The volume control itself, rather than using a regular pot, which can add distortion, consists of electronically controlled relays. It has two exponential gain settings, the lower of which has 99 steps, and the higher of which skips some of the resistors to give only 69 to reach the same maximum volume level. In usage with the Schiit Audio Yggdrasil I was in the 20’s on high gain with various headphones to get a moderate listening level, and felt that the steps give sufficient granularity both with headphones and speakers. One unexpected problem I had with the Yggdrasil and the NFB-1AMP involved the inputs. To prevent sound from one input leaking into the others, when an input is not used, or the power shut off, the inputs are shorted. While this is common in high-end components, the Yggdrasil has not been designed to handle this, and shorting its output will result in distortion. I had thought my Yggdrasil was faulty, for a while, until I discovered this. However the NFB-1AMP has internal jumpers that can be removed for each input preventing them shorting when not used, solving the problem. This requires breaking the warranty seal.

The NFB-1AMP comes with a basic, cheap remote control, and a metal version is available for extra money. The remote is designed for all Audio-gd products and includes selection buttons for digital inputs that are not part of the amp. Though all functions can be controlled with the remote, the only negative is that the volume can only be changed in single steps, requiring a press for each change. 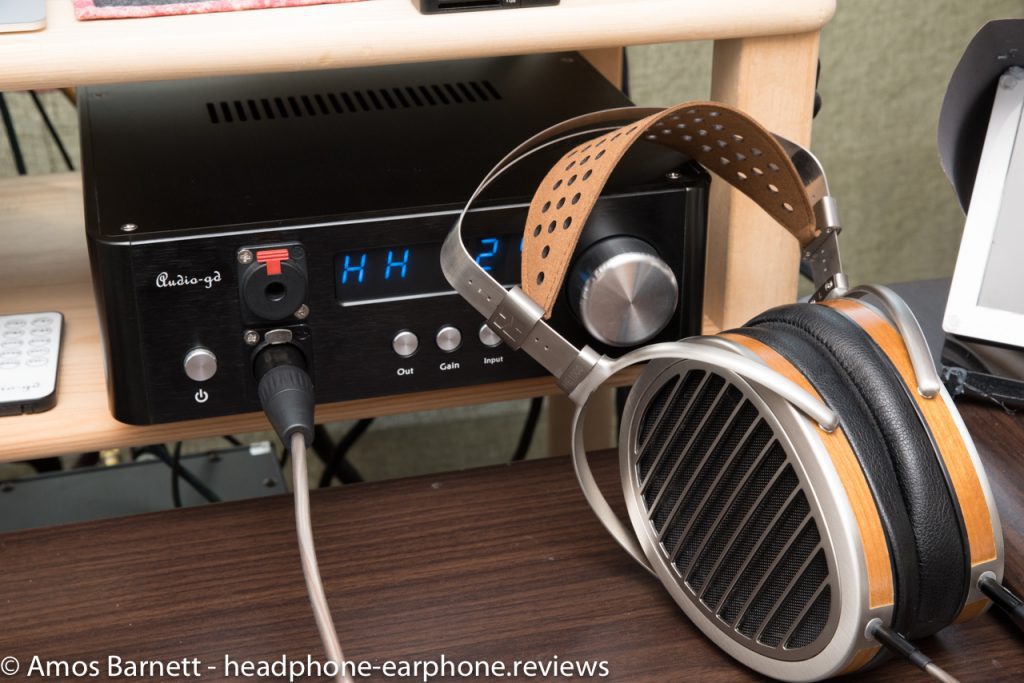 The Audio-gd house sound, at least for their amps, aims for complete, “wire-with-gain” neutrality. As much before as now, the feeling when listening is one where the amp simply disappears and only the music is left. I didn’t once have any thought about, say, the bass, mids and treble as separate entities, nor driving power or ability, such was the effect of the design. People talk of amps with a black background, but other than with the non-feedback designs from Audio-gd I’ve only experienced a similar feeling with from amps from Bakoon Japan (which use similar technology) in producing a that seems to be both very smooth and very detailed without being rolled off at all. It is more as if the music has just appeared, suddenly, out of a black hole of nothing, with a complete lack of distortion.

That makes brighter headphones, including ones with a livelier treble, wonderful to listen with. The HD800s simply sound fantastic, as do the MrSpeakers Ethers and HiFiMan’s Edition X. Warmer-sounding headphones aren’t left behind at all, with as much pleasure to be gained from Sony’s MDR-7Z and Audeze’s LCD-X, and there is enough volume range in low-gain mode that IEMs, if not excessively sensitive, will work from the single-ended output.  The only headphones where I felt that there wasn’t such a great sonic match was the HiFiMan HE1000 V2, which I know from experience can scale to greater heights with better equipment. With their fairly neutral, and arguably slightly too bass-shy sound, the overall result with the NFB-1AMP was somewhat uninspiring. No concerns with the cheaper, and more exciting-sounding Edition X however. 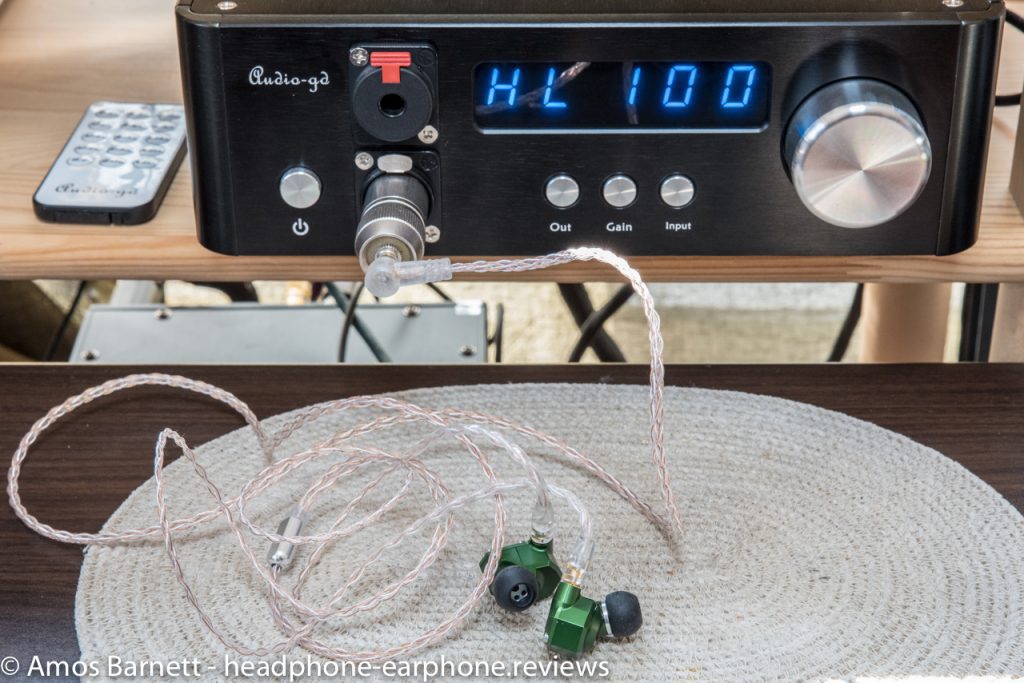 The low-distortion design meant that even IEMs were usable with the amp, out of either the single-ended or balanced sockets, for which I have an adaptor. It took the very sensitive ALO Andromedas to coax any noise out of the amp, and then it was only a small buzz. Other IEMs, such as ALO Audio’s Vegas or Ultimate Ears’ Reference Remastered were as easy to use and listen with as they were with any of the portable amps I have.

Using the NFB-1AMP as a pre-amp with my ADAM ARTist 3 monitors, compared to using the Yggdrasil direct to the speakers (and using their built-in volume controls) the level of detail was reduced very slightly, but without any sense of coloration being introduced into the sound. For most music this wasn’t an issue, but was noticeable with the best recordings I have. I also felt the dynamics were muted ever so slightly by the amp being in the chain.

The NFB-1AMP doesn’t quite match my ALO Audio Studio Six nor the APEX Sangaku for either ultimate dynamics or detail, the tube amps delivering more on all fronts. The degree to which it is close, however, makes the NFB-1AMP a fantastic bargain for such a versatile amp. With a good mid-range DAC, I can see why people who want low distortion and a neutral presentation like the design.

After using it for a while, it is giving me thoughts about buying a Master 9 so as to have that effortless presentation that I loved from the old Phoenix I used to use, as well as pre-amp functionality for when I want to use speakers.

Thanks to Audio-gd for providing the NFB-1AMP for review.