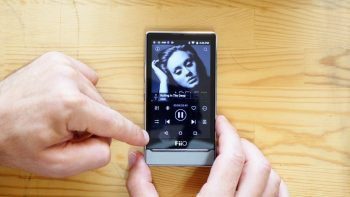 FiiO’s announcement of the X7 II means that a lot of the original generation FiiO X7 will be easy to find for cheap. While a bit slow, the build quality is excellent and it makes for quite a good transport and player. Something I forgot in the video: Standby time seems to be up to about 2 days, which isn’t as good as the old, non-Android players, which could sit around for weeks switched on not using battery. I didn’t go into a detail with IEMs tested, as the performance was consistently good whatever I listened with. It can also be used as a DAC with fairly equal results to being used as a player. I couldn’t get it to work reliably using USB with a Mojo, only coax.

Two years ago as I write this, FiiO publicly posted on Head-Fi for their proposal to make an Android-based DAP and asked members what they’d like it to have. “Everything and the kitchen sink” was more-or-less the answer, of course. The X7 itself, now with version 3.0 of the software, using Android 5 and supporting new features, such as DAC mode, software updates have seen it steadily improved.

While the DAC section has the ubiquitous ES9018 converter, the similarities to most other DAPs ends there, as one of four different analog amp modules can be attached, ranging from the battery-saving, low-power AM1 up to the high-power balanced AM3 and single-ended AM5 for full-sized headphones. There is also the USB-only AM0 module for making the X7 into a digital transport or line-out source.

The fit and finish of the DAP is excellent, with all components fitting together beautifully. The modules sit flush and attach tightly, the screws perfectly centred and the buttons and sockets on the body are perfectly aligned. Size-wise it is a bit shorter and narrower than a Calyx M and at roughly the same thickness, with a slightly less boxy design, it sits comfortably in my average-sized hands.

The X7 can be operated in either Android mode, or “Pure Music Mode” whereby the DAP switches on directly into the music player. In Android mode, to save having to set up Google Play, a “FiiO Marketplace” app has installers for popular apps such as TIDAL and Spotify.

Speaking of Pure Music Mode, the hardware itself, while fine for music playback alone, struggles if you attempt to use the X7 like you would a smartphone. Multi-tasking it not its strong point, and the 1GB internal memory limits caused a couple of problems when I attempted to keep a large amount of TIDAL music offline. The Bluetooth is also limited to A2DP (the X7 II adds APTx) so it wont be a good unit for use with Bluetooth headphones. I also had trouble using it in OTG mode with a Chord Mojo, the coax output being far more reliable.

The sound quality is pretty good though, challenging the popular Calyx M, which sets a sound quality standard at its price point. While the Calyx sounds spot-on to me, the X7 is, in comparison, a bit on the dry side with the modules I have. It doesn’t quite have the resolving power that Astell&Kern’s AK380 has, but with most music it is resolving enough that one wont notice.

I had no trouble doing everything from driving the HiFiMan HE1000 V2 with the AM5 high-power and the AM3 balanced module down to enjoying listening with the somewhat sensitive ALO Audio Andromedas out of the medium power AM2. It can’t match the resolution of the vastly more expensive AK380, but sans comparison, but still has enough detail to give a very satisfying listen with IEMs or full-sized headphones. It took comparisons with much more expensive devices, such as the Woo Audio WA8 and its lush sound to make me less appreciative of it.

A major member request has been for a dedicated digital transport to use with such devices as the Chord Mojo and Hugo. Plugging in the shorter AM0 module (or simply not plugging in headphones at all) battery life extends considerably and with a suitable cable (as FiiO’s digital output is unusual).  I used the X7 and a coaxial digital cable in this manner to audition Sony’s new Z1R system with my own music at the local Sony store.

For a fully-featured, yet great-value DAP the X7 is an good value choice, especially now that the release of the X7 II will see new and second-hand prices drop considerably. Also, with FiiO constantly working on improving the software, will be for some time to come.

See also the FiiO X7 AM2 AM3 unboxing video.