It all started some time ago with a message asking me if I’d like a free review sample of some headphones from a creatively off-beat name. I’d seen the name around Head-Fi and only guessed that they were inexpensive and may actually be half-decent, so I accepted. Later it turned out that they appeared to have given away quite a few pairs to people to review and that they were cheaper than expected. At under the $100 mark they were on the end of the scale that I usually ignored except when a handful of cheap-headphone-spotters would start arguing about over them in the forums.

The small box that arrived with a front revealing-flap did not encourage me with the marketing on the front — “Surround Closed Cavity Body” (meaningless), “Votrik Speaker” (who?), “High Definition” (Ungh!). It brought back memories from decades ago of my $10 “Dyanmic Stereo Sound” speakers which were single drivers in a cheap plastic box. Inside the flap is a lot of very small writing going over the features which I felt were more relevant once I opened the box in which they were neatly folded.

However that pair of “paino crafted varnish”-finished headphones turned out to be quite good value, especially after the price dropped to around $60. With a reasonable tonal balance, shifted more, but not excessively towards the warm end of things, they were an inexpensive all-rounder. The wireless version at roughly double the price allowed equally pleasant cable-free listening. So it was with interest that Noontec sent me their latest version, the limited edition Volcanic rock version, with a pleasant black matte finish.

The hinge is steel reinforced, which is a positive given that the headphones are understandably plastic. The “Designed in Italy” shape is attractive and matte finish, unlike the regular model’s piano varnish, attracts dust rather than fingerprints. This variation also comes with a basic carbon fibre carry case. 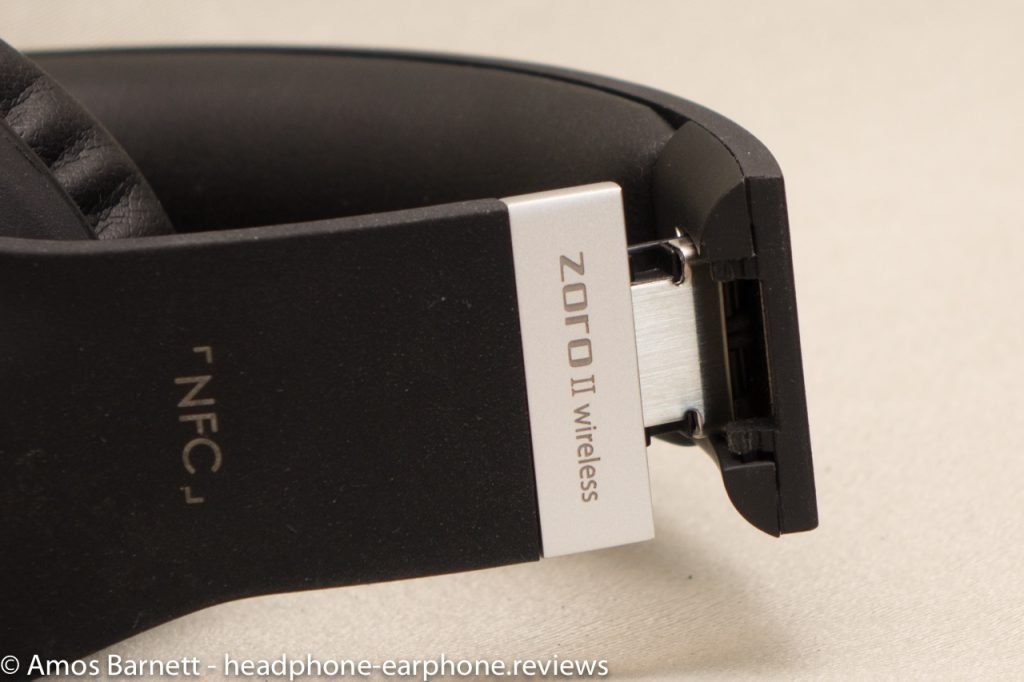 The headband arc ends at the hinge and part of it on either end are two tiny lugs which, when you open headphones all the way, snap into place. I immediately worried about the durability of snapping and folding this daily a few times and reached out to Noontec to ask them about durability. They replied that they had tested the hinge and it didn’t have any problems after “5000 times test” [sic].

Noontec appears to have taken the time to make decent earpads. I’ve seen too many pairs of low-range headphones that had vinyl so thin that the earpads were destroyed in short order, so decently thick earpads with a reasonably soft and smooth but a little robust-feeling covering was a pleasant surprise. The Zoro IIs sit on your ears, rather than around them, so this is important.

The fit and finish appears quite good, down to the cup swivels, which don’t just flop around. The headphones don’t rattle when shaken and even when folded the hinges only have a tiny amount of play, only about as much as one gets in a high-end zoom lens. Even the single-button-with-mike phone-compatible cable is decent enough — a long strip of thin rubber terminated with branded plugs. 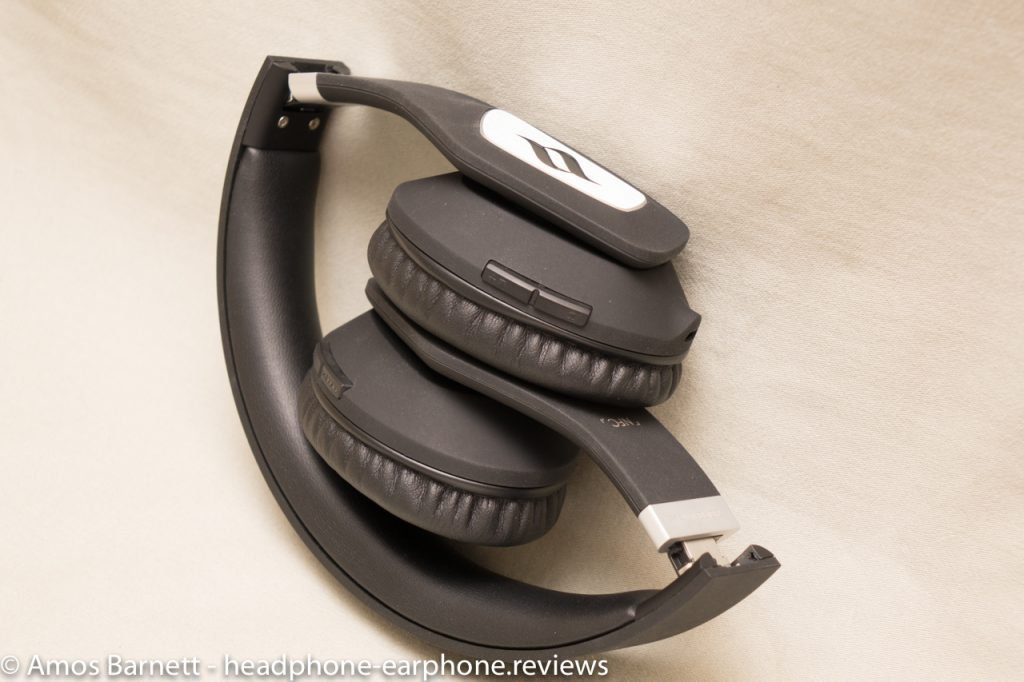 The playback controls on the headphones themselves are split between the cups, the left having power/play/pause, and the right having forward/back.

Like the wired version, at a moderate listening level the music is quite detailed and crisp. With the Volcanic Rock Edition (which I’ll shorted to VRE henceforth) Noontec has changed the tuning slightly, bringing out the treble more. The original has what I call a “consumer” tuning with a bump in the mid-bass and slightly rolled off treble, making them a good all-rounder with most genres. The rolled-off treble can mask some distortion.

With the VRE, using my computer as a source, with APTx transmission, there was still quite sufficient bass, but the stronger treble brings out some sibilance and harshness and pushes the vocals back a bit. While that can make the music sound more spacious, with the limited soundstage of the Zoro II design, there isn’t enough resolution to do this effectively. It also causes the music to have less punch, which was one of the good points of the original Zoro II headphones.

I noticed that passive noise isolation was very poor. While this may be a show-stopper for some people, as they wont be good in noisy environments, people looking for a pair of cheap headphones to use, say, in a workplace where they need to know if someone comes to their desk and attempts to speak to them, or who wants to listen quitely I hope, for safety while outside yet can still hear what is going on around them, may find this not to be a problem. 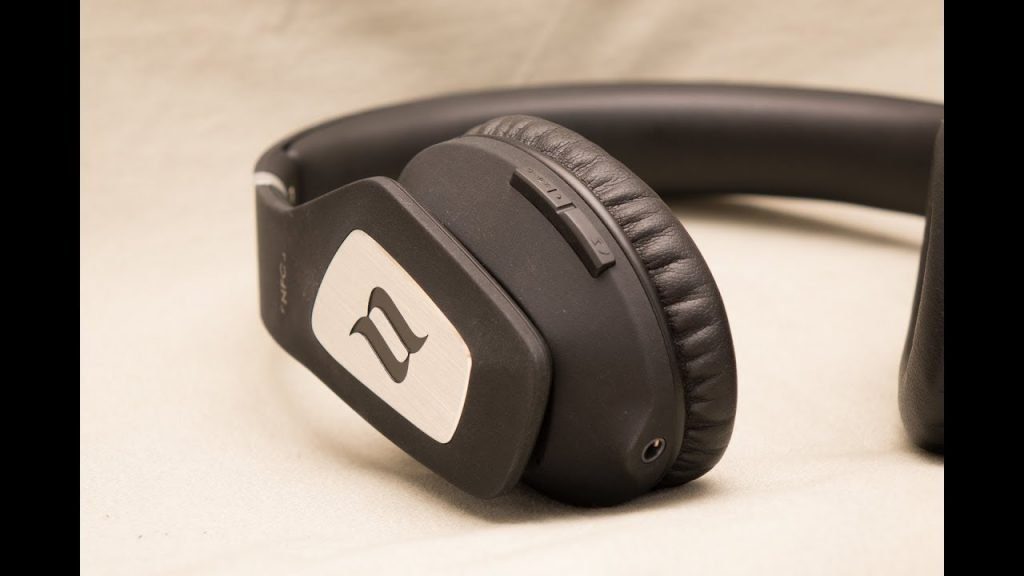 The mid-range and vocals are pleasant, if a bit thick-sounding in wired mode. There is a reasonable amount of spaciousness to the sound and the treble presence is about right, not too bright, nor too muted. The treble is rather ill-defined in wired mode, and a touch brighter and more harsh in wireless, but still good considering the price. The sound is more even in wireless mode, in this model the mid-bass has been dialled a step back.

Not surprisingly, the more even sound signature is suited nicely to acoustic music.  The presentation is more like my car stereo, which is completely stock (and which I enjoy listening casually while I drive, don’t get me wrong). All the same, there is enough punch to the notes, even if there is some, quite expected vagueness. Pleasantly the usual evil of inexpensive headphones — harshness — is mostly absent with the Zoro II Wireless.

I’ve had far more expensive headphones rattle and shake with the bass from this track. The Zoro II Wireless didn’t at slightly above my normal listening volume, while managing to deliver the bass well. Nice going.

Another track which is about the bass line, though this time in the mid-bass. While the music is more closed-in sounding than on my better headphones (obviously) the Zoro II Wireless manages to bring at least enough entertainment to make things enjoyable.

When I get my Hands on You – The New Basement Tapes

Bass track #3. Has a very deep bass line which shows me how low the bass rolls off, and in wireless mode it does, but at least it comes through, if without the profound thump one gets with better headphones. The emotion of the vocals comes through, as does the pluck of the instruments, enough to make listening quite enjoyable.

Simpler music stands a better chance with these headphones, and they do a nice job with this fairly uncomplicated track. Neil’s voice is quite pleasant, and the guitars sit apart reasonably well, though I find myself becoming a bit tired of the treble.

Do you Remember – Ane Brun

Some sibilance comes out in the vocals on this track and it is here that I start wishing for the original sound signature with its more punchy bass. 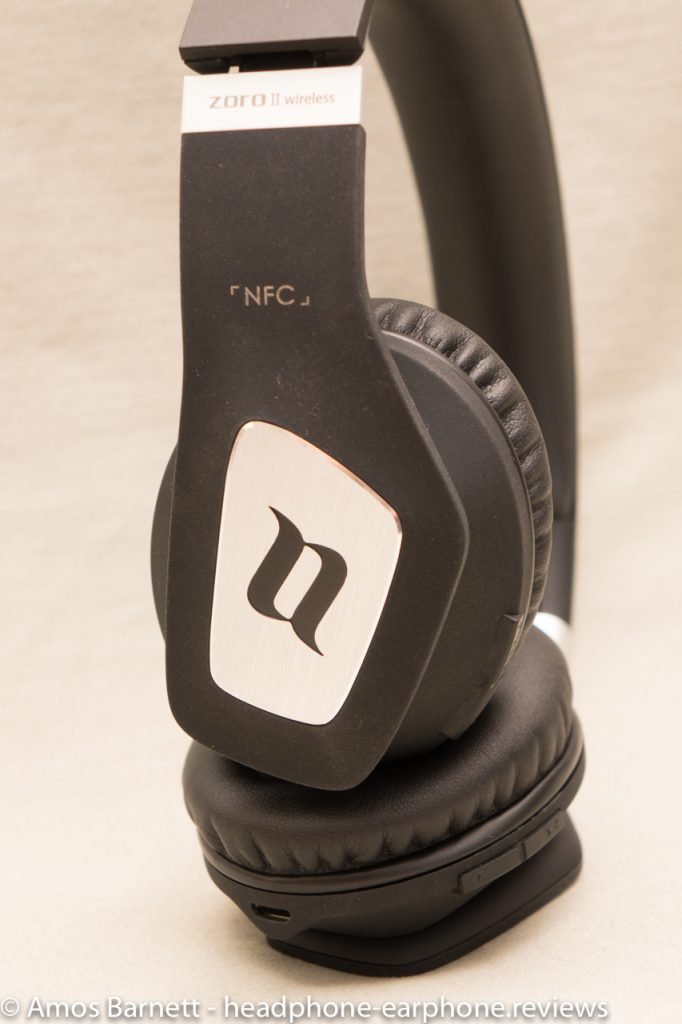 Overall I find the Noontec Zoro II Wireless Volcanic Rock to be a nice, inexpensive yet well-designed pair of headphones for people who are more accustomed to listening to acoustic music where the brighter tuning will fare better. Like other headphones and IEMs down near their price range, I don’t recommend them for people who like to listen very loud as this is where inexpensive designs are most likely to show weakness. They also perform best in wireless mode, and slightly less ideally in wired mode. If they are to be used mostly in wired mode, getting the original wired versions will likely be better sonically and much better value.