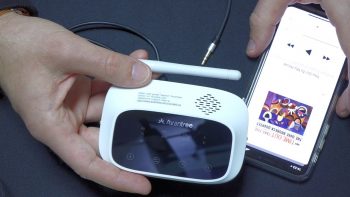 I’ve regularly seen people ask about using Bluetooth headphones with a TV or using an old stereo with a smart phone and the Avantree Oasis fits the bill for both. Avantree contacted me asking if there was anything I might like to review and when I saw the Oasis I thought it would be the perfect opportunity to answer those kinds of questions.

The Oasis itself is a small plastic box, powered by an included 5V wall-wart or just about any USB power supply. I used an iPhone charger for convenience, as it fits into a power strip more readily.

Initially the Oasis is a bit complex, with settings switches on both sides, touch controls on the top, and 4 input/output ports on the back. On the right is the power switch, from which you can select bypass mode (optical input/output passthrough) or Bluetooth mode. The switch on the left, in Bluetooth mode selects between Transmit and Receive modes.

The optical or AUX ports on the back are correspondingly (and at first seemingly contradictorily) labelled “TX Input” (i.e.: “Transmit input”) for connecting a source to transmit via Bluetooth and “RX output” to output audio received via Bluetooth.

The front panel has mostly to do with Bluetooth: Adding and selecting one of the maximum of two devices that can be paired. One button chooses between analog (AUX) and optical digital input/output.

Given the confusing list of combinations possible, and subsequent issues of trying to work out why you don’t have sound due to misconfiguration, the Oasis from power on announces its state and every mode change, of both side and front buttons, to the point of reminding you to plug in a cable for the selected mode. Thus its state is never ambiguous, unless one is using it after it has been left on a long time and its set-up requires manually checking the switches.

I tested the Oasis as a receiver from my iPhone outputting both digital and analog; and as a transmitter to some of the various Bluetooth headphones I have here, sourced from  my TV.  When transmitting to Bluetooth headphones, the first thing to note is that there is a 200 millisecond delay with most headphones that don’t have the Low Latency APTx mode. Used to watch the TV, this is only very slightly noticeable, and I didn’t find it bothersome. However Avantree and other manufacturers offer inexpensive headphones with this feature which reduces the delay significantly.

As a receiver, my iPhone doesn’t transmit via APTx and the Oasis doesn’t support Apple’s AAC transmission codec. Regardless, the sound quality was still pretty decent even using SBC transmission.

Once I got the hang of the set-up, using the Oasis was fairly straight-forward and it did its duty without hiccups both transmitting and receiving. What was curious about was the sound quality from the AUX output, which I didn’t have high hopes for. Plugging it in as a source to my Studio Six and Utopia headphones, I was surprised that the sound quality, while obviously not competing with any of my DACs, did an admirably listenable job producing music. That, for me, ticks the box when it comes to recommending something to connect to an old hi-fi system.

For the money, the Avantree Oasis is arguably a bit expensive considering the numerous similar devices out there, but if you want or need all the features and flexibility, and the lack of AAC transmission isn’t a showstopper, it does the job.