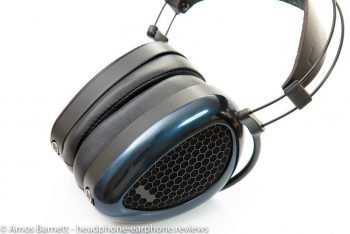 After the highly successful release of the Ether headphone series, it remained to be seen if Dan Clark would come out with less expensive models. The release of the Aeon (now called the Aeon Flow, as it uses the same technology as the Ether Flow) showed that he could streamline his designs and make them work at a much lower price point. The Aeon Flow Open now gives the less-expensive series and open-backed version.

It was interesting to watch engineers from other companies pick up his headphones at the Tokyo show last year and marvel over the design. The simple and effective ergonomics of the 3D-printed single-sided yoke that connects the cups and Nitinol wire headband, with 2 fewer hinges than the Ether headphones, sums up the simplification of the design.

While still very much full-sized headphones, the teardrop shape of the cups reduces the front-to-back depth compared to the Ether series, making them more readily portable. The design maintains the basics of the easily-replaceable and easily adjustable leather headpad, while deep and plush leather earpads and the overall flexibility of the design makes for instant comfort.

The Nitinol wire, most well-known for its use in the braces that many of us had on our teeth when we were teenagers, returns to its set shape after being bent. This makes it perfect for headphones as Dan has selected a diameter that, paired, holds the headphones just right one one’s head, with good, but not excessive force.

The Aeon Flow Open uses the same Hirose-terminated cables as the rest of the MrSpeakers line, but like the closed model which was released first, the cable is terminated with a 3.5mm plug that has a screw-on 6.5mm adaptor.

By default, the Aeon Flow Open comes with a set of white inserts installed in the cups. Of the three sets of inserts included, two white and one black, the installed set is a middle amount of damping. It proved a bit too muted for my tastes and I ended up spending most of my time with the black ones.

Overall though the sound signature is much like that of the Ether Flow: Relatively neutral with something of a boost in the mid-bass. Unlike with the original Aeon, I didn’t feel that the low bass was too rolled off. Coming from having just reviewed Campfire Audio’s Cascades with their thundering and sometimes overwhelming bass, the Aeon Flow Open seemed more tame and the closed-back Aeons felt like someone had shut off a subwoofer entirely.

While I missed some of the bass thump of the Cascades, the Aeon Flow Open was less likely to overwhelm me with it. With the black inserts, which allowed a bit more zing in the treble, playing nicer with the acoustic music I like, especially where there was already plenty of bass in the mix.

For more aggressive recordings, I could always switch back to the white inserts. Of the two white sets, the most damping set didn’t seem to have much of an effect beyond the “middle” set.

Both from the overall tonal balance as well as from the quality of the drivers, the presentation was cohesive and competent from bass through the mids and treble, the latter of which I’ve always found pleasantly nuanced and well-balanced.

The quality of the presentation is, not surprisingly, somewhat reflective of not just the music, but components the Aeon Flow Open is used with. With a 13 Ohm impedance and 94dB/mW sensitivity, they seem on spec to be somewhat difficult to drive.

Somewhat surprisingly, they manage to drive even out of my iPhone 6 and the Bluewave Get fine at low to moderate loudness. However clear improvements were to be had using equipment with more power. The recently reviewed iFi xDSD, with its peak power of 500mW at 16 Ohms showed immediate synergy, as did the Chord Mojo, with which I could make out the slightly better sense of depth it can extract from recordings.

Like its siblings the Ether Flow and Ether Flow Closed the Aeons exhibit similarities in how the closed back affects the sound, with the closed-backed version having less mid-bass.

The Aeons compared to the Ethers seemed to exhibit about the same degree of resolution, but, possibly from the shape, present the music with less of a soundstage, the closed-back Aeon being the narrowest-sounding of all.

Switching back and forth between the two open headphones, the Ether Flow delivers the music wider, but with more of a sense of the music coming from left and right. The Aeon Flow Open is more closed-in, but seems to hit just the right spot when it comes to putting a stereo image in front of you, the sound presented in feels like a continuous curve around your head.

Overall, I feel like MrSpeakers has delivered most of what the Ether Flow does for around half the cost, and made it more portable-friendly with almost nothing sacrificed.