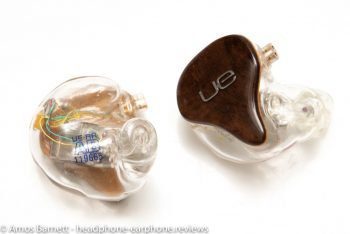 Ultimate Ears’ Reference Monitor (UERM) became such a standard amongst some members on Head-Fi that at one point a member asked in one of the popular “diary” threads a question along the lines of “So, have you heard any good IEMs lately, other than the UERMs?” It quickly became my reference, not just because I knew if I tested gear with them that I could ask half-a-dozen friends who owned a pair for their opinion (since they were all highly matched) but because they had just the right balanced of neutrality and musicality.

That made me very curious when I’d heard that Ultimate Ears had created the Reference Remastered. With my ears already having been electronically scanned at CanJam SoCal, I only had to place a regular order and a code to get my review pair.

Where many manufacturers have focussed on the presentation of their IEMs, trying to make something more noticeable in the market, Ultimate Ears has always been about the customer experience. They are the only manufacturer, for example, who has a display and tour of the cases they have used to package the IEMs, continually evolving the designs to best suit their customers.

Given the issues we often read about with the fit of custom IEMs (CIEMs) Ultimate Ears was an early adopter of 3D laser ear scanning. My UERM moulds were done by Ultimate Ears’ expert at their office. The UERRs have a very slightly looser, more comfortable and consistent fit using the laser scan at CanJam SoCal a year before I “ordered” them.

My UERMs, for example, came in the second version of their rectangular storage case. While it was neat, especially given that it has my name on it, the case itself was unnecessarily bulky. With the UERR they reverted to a round aluminium case with an o-ring seal instead of screw lid like the Jerry Harvey era cases. It also slightly larger than the old screw-top ones, making it easier to fit the contents.

Initial impressions are that the UERR is considerably more bass-light than the UERM. At first it felt like something was wrong, but after a few dozen hours of run-in the base appeared. Since they are a studio monitor, while deep bass is there, it isn’t strong, even on tracks with considerable bass lines. Things makes the mid range feel stronger, bringing vocals and instruments somewhat more to the forefront. Think an IEM version of the AKG K700 series.

The older UERM on the other hand is quite bright and intense to listen with, a 10 kHz treble peak bringing the air to acoustic music, though too strong with more modern stuff.

For example, the Devil’s Painbrush Road by The Wailin’ Jennys is very lively with the UERM, the UERR’s more muted treble initially feels a bit too muted, but instead of having the vocals pushed in your face with that “zing” from the treble, instead you feel like you’re listening to them in a sound-damped recording studio. The more laid-back presentation allows you to focus on the nuances of the music.

What is there of the music is delivered with great honesty, instruments, individual notes and sounds delineated sufficiently that I could forget to a fair degree that I was listening with IEMs and focus on the music.

One aspect that I am grateful for is that the treble isn’t over-emphasised. Not being aimed primarily at consumers, they haven’t fallen into the trap of making a design that is very bright in an attempt to give an impression of detail or space. Regardless, faults in the music, especially in the mids and treble, are very apparent when listening. I could make out the less than stellar quality of Caught in a Long Wind By Feist.

However the deep bass rumble from When I Get My Hands on You by The New Basement Tapes was significantly muted, to a degree that detracts significantly from the music.

When it comes to amplification, the Reference Remastered are also not over-sensitive, meaning that some amps that had not been ideal with ALO Audio’s Andromedas due to hiss, such as the Continental V5, weren’t a problem with the UERR.

At the same time, equipment that has a tuning that favours euphoric listening over dead neutrality was a lovely match with the UERR.

That leaves the Ultimate Ears Reference Remastered as a relaxed-sounding and not unreasonably priced pair of IEMs. While they don’t have quite the listening magic I enjoy from the old Reference Monitors, or the fancy designs from some other brands, they make up for that with top-notch service and, for me, a very comfortable fit.