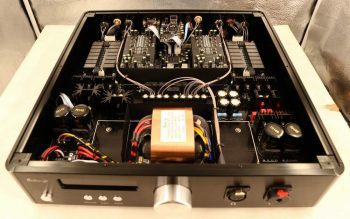 Audio-gd has announced a new all-in-one DAC and headphone amplifier, the R-28. Previously Audio-gd had been offering a discount if the R-1 ladder DAC was purchased with an NFB-1AMP, as Kingwa stated it wasn’t possible to fit a suitable ladder DAC/amp inside the NFB-1AMP chassis.

The R-28 appears to use a chassis slightly smaller than the regular large chassis used for components such as the R2R 7, while using the DA-8 modules from the R-1 DAC and a relay stepped attenuator as in the NFB-1AMP.

As usual for Audio-gd components, the R-28 has a plethora of inputs and outputs, with USB, I2S (HDMI port), optical and coaxial S/PDIF, as well as analog input bypassing the DAC. Rear outputs are the usual trio of XLR, RCA and current-mode ACSS.

The R-28 can be used either as a fixed DAC or pre-amp via a rear switch, and it appears that DAC or headamp functionality is switchable from the front panel.

For US$1038 ($1078 with a TCXO clock upgrade) this looks to be at a great sweet-spot for people looking for a ladder DAC/amp in one box. Keep an eye out for my upcoming review.