As the first in a series of reviews of headphone amplifiers and related components I’ll doing video reviews of over the coming months, the Soundaware P1 sits firmly in the middle between less expensive, but still very good amps such as the Schiit Audio Lyr 3 and Audio-gd NFB-1AMP and higher-end amps such as the Audio-gd Master 9 and iFi Audio Pro iCan.

However, at around $1400 there is nothing high-end about the price. It is specifically designed to work with their new DAP, the MR1 via a special Soundaware Link (SAW) cable, which can also be charged via a special power-only USB port on the rear. Available in both blue and a matte silver/grey, it’s physically only slightly larger than a Lyr 3 or Cavalli Tube Hybrid and almost exactly the same size as iFi’s Pro iCan.

For my review, I decided not to reviewing the matching MR1, as in the Chinese market sound quality is the main focus, customers in the West consider features to be very important and the lack of a full Android-based touchscreen interface makes it a hard ask against competitors. I was mainly interested to find out if they could make a good mid-to-high-end amplifier.

Functionality-wise, there are three inputs — the usual single-ended and balanced, as well as the aforementioned SAW link. Unusually, there is a gain switch on the back between the inputs and the adjacent pre-amp outputs.

The relay-controlled inputs are switched via a touch-sensitive button on the front. The position of this selected proved to be a bit of a nuisance at times. As it is quite close to the volume knob, it was easy to accidentally touch and unintentionally switch the input.

Sensibly, the headphone/pre-amp switch is above the volume control. This makes it easy to see which mode the P1 is in and avoid the “Why is there no sound?” problem that often occurs with amps that do double-duty.

Setting up the amp was straight-forward. The feet are metal, I imagine so as to transfer vibrations away from the electronics. This proved to be a small nuisance as it made it easy for the amp to slide around my rack. To that end, I put Herbies dampers under the feet.

Soundaware recommended that I use a good power cable with the amp. Unlike Audio-gd’s Master 9, which has a very comprehensive power supply built in, the one in the P1 isn’t so substantial and I did find it beneficial to run it from my PS Audio Power Plant Premier.

The P1 is also a capacitor coupled amp, using high-quality capacitors between the amplification circuits and the output. Capacitor coupling is one of the ways to isolate the output of an amp from the constant DC voltage running inside it, another being using a DC servo as the Audio-gd does. The downside to coupling capacitors is that can introduce a slight coloration to the sound as they rapidly store and release energy.

The P1 has up to about 6W of output power at 30-100 Ohms, enough to drive HiFiMan’s Susvaras easily and a massive overkill of power for high-impedance cans, with over 1W at 600 Ohms.

Listening was done primarily with the Focal Utopias as I find them the most revealing of component character. The HiFiMan Susvara, Campfire Audio Cascade, MrSpeakers Ether Flow and Massdrop Sennheiser HD6XX were used (though the latter not in the video).

The general presentation of the P1 was that it gave the music a slight smoothness that made listening using any source quite pleasant. It was very slightly forgiving with music, while not seeming to sacrifice dynamics, that I was most inclined to listen using it than the other amps. For example, Patty Griffin’s One Big Love isn’t the most well-recorded track, boarding on blatantly harsh, and the P1 took the edge off the recording just enough to make it bearable. Likewise The Wallflowers’ One Headlight which is one of my favourite tracks of recent times.

With a number of DACs having very capable headphone outputs I compared it to using them direct. With the Focal Utopias, not surprisingly the most detail was to be had directly from the Chord Hugo 2 or iFi Pro iDSD.

At times it is possible to feel that the Hugo 2 is a bit thin-sounding, similar to how the Pro iDSD’s Transient Aligned filter in solid-state mode can be too much of a good thing. Like the (sadly discontinued) APEX Sangaku, adding a bit of warmth and sweetness balanced things up to make for a more easy listen.

The iFi Audio’s Pro iCan in comparison, offers up a very punchy sound which can be very exciting to listen to. With the flexibility of XBass and 3D modes the sound can be tuned for the most enjoyment. On the other hand, I felt I could hear more into the music with the Soundaware P1 with more of the fine detail coming through.

The Audio-gd Master 9, as always, is a true “nothing but the facts” amp, presenting source and music as-is. It made me very aware of the slightly “dry” character of Schiit Audio’s Yggdrasil, not necessarily for the better. The P1, on the other hand, added a touch of warmth, and consequently listening was more enjoyable.

Almost opposite in presentation was the new Schiit Audio Lyr 3. While not the amp for people looking for ultra-detail, even with the more relaxed-sounding Sylvania “chrome dome” 6SN7, it was very lively in presentation with fantastic dynamics (This is Class A/B done right, make note!). At a third of the price, the presentation is addictive, though the casework is not as beautiful and it lacks the small touches, such as relay-controlled switching and switchable pre-amp functionality that makes the P1 great.

As a pre-amp, the P1 did a good job controlling music sent to the ADAM ARTist 3 speakers that sit on my desk, where the sweetness nicely matched with the precision of the ribbon tweeters.

The P1 also has sufficient power to drive HiFiMan’s Susvaras. With these, it did a competent job, but wasn’t as exciting or capable of delivering the huge dynamics of HiFiMan’s EF1000 amp.

I tried the Soundaware P1 plugged in both directly to an un-filtered power point using a regular cable, as well as from my Power Plant Premier using a shielded power cord with rhodium plugs. I had just received the press release copy of A Night of Chesky Jazz Live (2018 Remaster) and it made for a good test of the amp and the latter set-up definitely helped the amp more ease and space to the music. 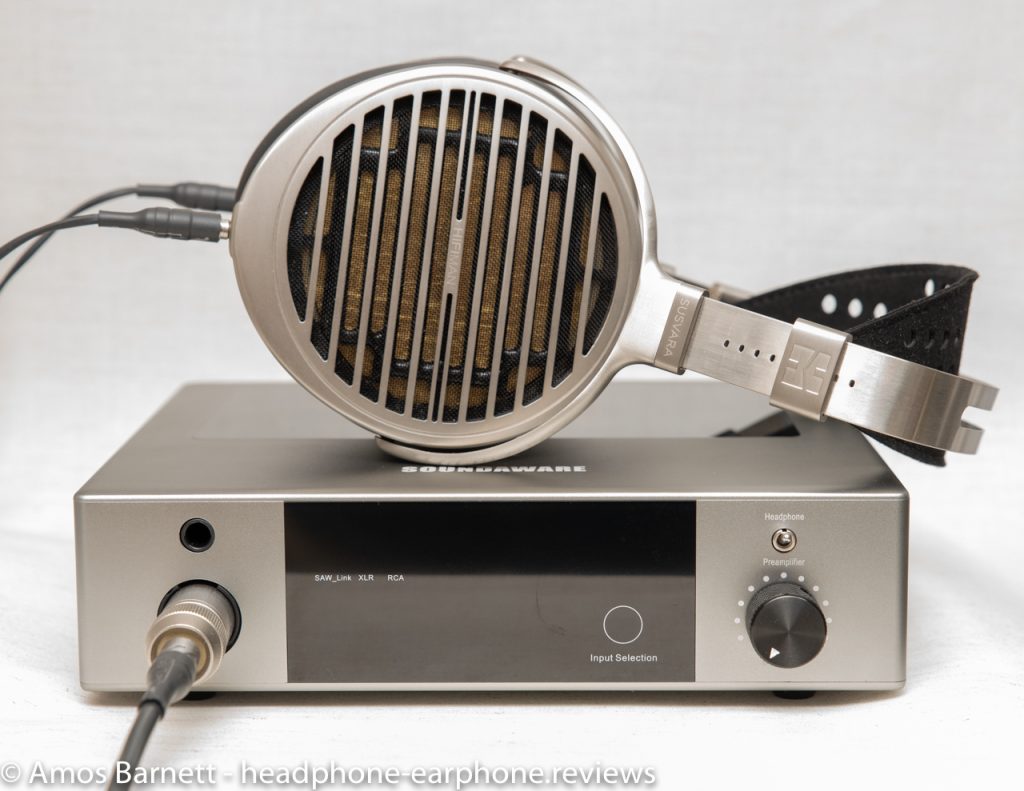 For me, the Soundaware P1 really hits the perfect spot between delivering every last detail and providing an enjoyable listen. While it may not provide as much power or deliver as much ultra-micro detail as more expensive amps, it’s a well-made and mostly well thought-out design at the right price.