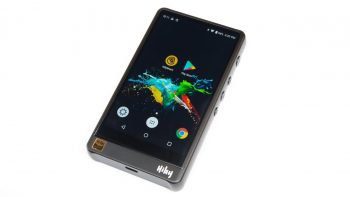 If you’re after a dedicated portable music player these days, it’s hard not to simply buy a smart phone from makers such as LG who are now targeting portable audiophiles. Offering the speed of modern phones, they often have a lot faster hardware than their DAP (Digital Audio Player) counterparts. To get anything equivalent requires spending a lot, for something like Astell&Kern’s S&P1000. However Hiby has stepped into to change all that with the R6.

The pitch is simple: Quad-core Snapdragon CPU, 3GB of RAM, Dual ESS ES9028Q2M DACs and the latest Android OS, with bit-perfect output and fully-featured music playback software, and all for under $600 (or a bit more if you want a steel case).

So what’s the catch? It’s on Indiegogo, so you can’t really buy one, only pledge. That alone would have me refuse to review it on principle, but it is already being manufactured in small numbers in China, and the campaign is only to fund the final production.

The other reason I agreed is that Hiby Music is already an established company. Quite a few of the players already out there use software created by Hiby Music, so they are hardly new to the industry.

Externally the fit and finish is perfect. While it lacks some of the nicer features of other DAPs, such as a volume wheel, there are some nice touches, such as the rounded corners and the power indicator light on the power button changing colour depending on the resolution of the music being played.

The overall size is about the same as a FiiO X7 with the AM0 (ampless) module. The screen is bright and crisp and the sockets look to be quality items.

Functionality-wise the R6 is your typical player. Insert a micro-SD card of your choice (it supports up to 2TB, even if a card this large doesn’t exist yet), start up the Hiby Music Player, sync your music, plug in headphones or IEMs (balanced 2.5mm or 3.5mm single-ended) and control playback and volume using the side buttons.

On the good side, it has a USB C port which has Qualcomm Quickcharge support, allowing you to charge the battery faster than other players. It also has a line out socket that also supports coaxial digital output, using the same, slightly annoying pinout as FiiO does, where the sleeve of the plug is positive.

In the box, the R6 comes with a very nice gold-plated USB C cable with a quality cable tie and rubber case. For extra, it is possible to order a leather case, which was sent with mine for the review.

An equally high-quality digital coaxial cable is also included so that the R6 can be used as a transport to a regular DAC.

To complete the picture, as well as the attached screen protector, a spare one is included in the box.

One negative is that the headphone sockets have a 10 Ohm output impedance. While this reduces noise, it will have some effects on IEMs that use multiple balanced armatures and subsequently don’t have a flat impedance curve. The lack of a wheeled volume may also be less than ideal for some people.

Unlike other DAPs, the R6 only comes with a single micro SD card slot. If you want to carry more than 256 GB of music (plus the 32 GB of internal storage) you’re out of luck.

However where it really shines is that it runs as fast as a modern smart phone. After using the R6 for a couple of weeks, my original FiiO X7 seems incredibly slow and frustrating.

The Hiby Music player has plenty of features. While the usual listings of artist, genre and album are available, on individual tracks, small icons indicate the file quality. A CD image shows for CD quality, an indicators for high res and DSD are also present. This makes it easy if you’re like me and have multiple versions of the same album and want to easily select the correct one to play.

Despite the less than desirable 10 Ohm output impedance, Ultimate Ears Reference Remastered and the JH Audio Roxannes didn’t end up with any significant frequency shifts as a result. Nor did the JH Audio Laylas, which was rather unexpected.

However the Campfire Audio Andromedas sounded brighter than usual, similar to how they were affected by using them directly from my older iPhone 6. It wasn’t such a big issue that I couldn’t just change the tips from my preferred JVC Spiral Dots to, say, some foam tips which cause the sound to become darker.

I did most of my listening using the default “Reference” setting in the sound options in the settings. The change caused by the “Warm” and “Tube Amp” settings were subtle, only really noticeable when I switched back to the “Reference” setting. The “Tube Amp” setting especially seems to create a subtle, pleasant V-shape to the sound, as tubes can do.

That all being said, the overall sonic presentation of the R6 brought to mind the words “clean”, “clear” and “forward”. When I was asked by someone looking for a warm-sounding DAP if they should buy the R6, I suggested not. It’s more like the FiiO X7II, a DAP notable for its excellent measurements, and corresponding clarity.

This is not like the (sadly discontinued) Calyx M, for example, which is quite warm-sounding, to a degree that I hadn’t realised how much so until I compared it to the R6.

At five times the price, the Astell&Kern AK380 one would expect to sound better, and indeed it does. The music flows with more ease and detail, whereas the R6 in comparison sounds more up-front and forced. This was quite noticeable playing Friday Night in San Francisco (in either PCM or DSD) where the AK380’s output was clearly more competent.

However without comparing, the R6 was good enough that most people wouldn’t know what they are missing, and with most music (and probably most IEMs or headphones) it wouldn’t make a significant enough difference. This proved readily apparent when I compared the DAPs with a variety of more mainstream music that I like.

When I had FiiO’s X7 and X7II, I had noticed that while the original X7 didn’t improve so much using an external amp versus the amp modules, I did notice that the built-in DAC of the X7II seemed to be better than the modules were capable of demonstrating.

With this in mind, I tried the R6 with my regular standard for portable listening, the ALO Audio Continental V5. The CV5 (as it is known in short) is a highly resolving portable amp that uses a tube for gain and the same output chip as the R6 does for headphone drive.

Using the Focal Utopias, which I consider highly revealing of the quality of components, while I did notice a slight improvement with it, as well as using a HeadAmp Pico Power, it wasn’t enough that I’d consider spending the hundreds of dollars on either to create a stack with the R6.

Another frequently requested comparison is with the Chord Mojo. It still sits as my gold standard for $600 DAC/amps, and the serious computing power inside produces a slightly more natural presentation of musical instruments, which with improved clarity makes it a nicer device to listen with overall. However it can’t store music (and the matching Poly which can is another ~$600 on top).

The Hiby R6 has set a high bar in its price range, especially as it is possible to buy the black version for $455 (at the time of publishing). The nearest competitor with anything like it’s feature set is FiiO’s X7II, which at $649 is the same price as the silver R6. It would be interesting to see how it stacks up with the Onkyo and Pioneer DAPs which are even cheaper, or Astell&Kern’s AK70.

If you want a full Android interface and install the apps you want, the R6 does such a competent job with most headphones and IEMs that for the average enthusiast it would be as high-end a DAP as they would need. To do seriously better, you’d have to spend a great deal more.

Thanks to Hiby for lending me the R6 for review.