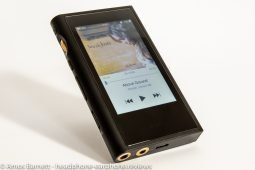 A day before I was due to head to Tokyo to the 2018 Autumn FujiyaAvic Headphone Festival a box arrived. It was just in time and the result of quick work by FiiO to get an M9 out to me. This DAP would solve a number of problems for me, including having a DAP which would output music over Sony’s new LDAC Bluetooth protocol, while also working as a transport for the Hugo 2.

Fresh-out-of-the-factory products can be somewhat hit-and-miss, but despite one feature not yet fully operational (the Bluetooth receiving mode) it performed almost flawlessly the whole weekend. Most pleasantly, it doesn’t run out of power as fast as the larger X7II can, allowing up to 10 hours of playback and 45 days of standby. In this regard, memories of the old X5II arise. However, while the X5II used a simpler, Hiby-based OS, the M9 uses full Android… almost.

FiiO has customised Android 7 to suit, which means TIDAL, Spotify, Qobuz and Deezer support, but nothing else that isn’t whitelisted, to ensure reliable performance. The logic of this is apparent when I find that I can store offline TIDAL content on the micro SD card, something that the old X7 wouldn’t allow. With only 2GB internal memory, this is absolutely necessary.

As with the smaller size, single card slot, smaller screen, low memory and low power output, the only thing not low is the CPU and consequent UI speed, with apps opening fast and scrolling absolutely zippy, except when listing albums in grid mode, where album art display slows things down.

By default it comes in an attractive transparent case, which I never bothered to take off (except for photographs), as access to everything was possible. Above the requisite playback controls on the side, I am pleased to find a volume wheel, though less enthusiastic when I find that it can barely get through two clicks of the wheel in a single movement. In the end it was simpler to click once to bring up the volume then use the screen adjustment most of the time.

Although the build quality of FiiO DAPs is already excellent, it was pleasing to see a steady increase in attention to detail in the design, from the above-mentioned more attractive case to the more precisely made, Apple-like packaging.

Two headphone (3.5mm single-ended and 2.5mm balanced) and one USB-C port adorn the bottom. The latter change makes for two-way use, the M9 capable of both being a USB DAC and a USB transport. The latter function I had tried with only moderate success a Shanling M0, so I was very pleased when it fed my Chord Hugo 2 without any issues, despite being plugged and unplugged repeatedly. I had similar success with my own DIY S/PDIF adaptor to use between FiiO DAPs and the Chord Mojo and iFi Audio xDSD. Both made for a nice stack, though I could only use one rubber band to hold them together due to the proximity of the power button to the top section above the screen.

Like the X7II, the major functions are accessible via the pull-down at the top of the screen. Line-out mode pops up a warning about volume, though volume-controlled line-out is possible via the Settings app. One small error I found was that the filter settings option from the pull-down only opened up the audio settings, not the filter settings directly.

The first time I used the FiiO Music app, I didn’t go through the automatic help guide that appears the first time and missed an important navigation function. Since the M9 doesn’t have a “back” button anywhere, to go back from any screen, you have to swipe up from the bottom on the left side. Swiping up from the bottom on the right takes you back to the home screen. Until I discovered that I ended up somewhat confused how to get out of TIDAL and other apps.

Playback was almost completely flawless. DSD playback was the only area I had an issue, but not with DSD as much as when I switched from listening to the DSD version of a Patricia Barber album to the regular PCM version, as the software indicated that music was playing, but it wasn’t for some seconds that playback began, some seconds into the track. Also, occasionally, selecting a DSD track to play would crash FiiO Music.

However being able to see clearly what tracks were “SQ” (Standard Quality), “HR” (High Res) and “DSD” is, as always, extremely handy. As was the ability to select which of the controls can still be used when the screen is off, as the side buttons are very easy to press.

With the xDSD, and also the Audeze Mobius, I had a good wireless transport in the M9.  I experimented with the Mobius using the highest quality LDAC setting and it worked reliably even when I went three rooms away. However I have the advantage that I’m living next to nature and this may not be so reliable with other devices in the middle of a big city.  However, I can imagine using it with a collection of TIDAL offline files and a pair of noise-cancelling headphones on long flights.

For the Bluetooth receiving mode, with the initial firmware the M9 doesn’t yet support receiving in higher quality than SBC. APTx, APTxHD and LDAC will be available with a future firmware update. Once that arrives, I plan to experiment with wireless sound quality. 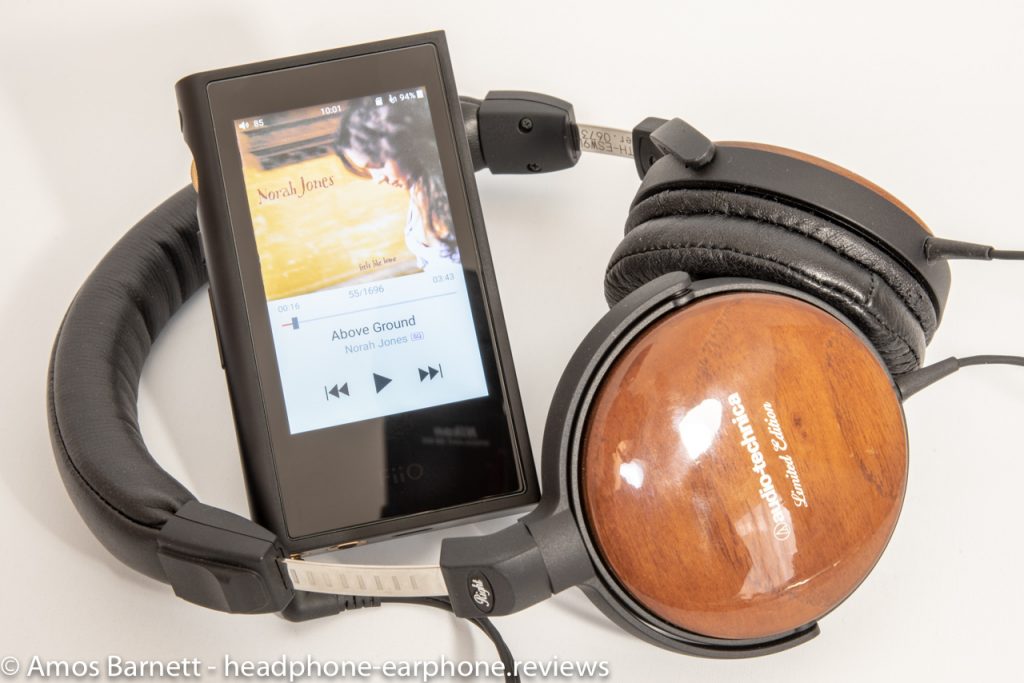 Listening with different IEMs and headphones

With only fairly minimal power output and a pair of AKM DACs providing digital conversion, all that remained was to listen. At my usual moderate listening levels, the M9 did a good job of driving everything from IEMs through to full-sized headphones. Not surprisingly, for the majority of IEMs and headphones adding an amp to the chain, such as HeadAmp’s Pico Power, Sound Potion Monolith or ALO Audio CV5 opened up the soundstage.

Somewhat surprisingly, the higher the impedance the headphones, the less of a difference this made. HiFiMan’s RE2000 IEMs, which are 60 Ohms, were driven quite well, as were the 300 Ohm Massdrop Sennheiser HD6XX. Lower impedance cans such as my pair of Audio Technica ESW9LTD, the Campfire Audio Cascades and the Focal Utopias were nicer with an amp added into the chain.

For the flights to and from Tokyo, that allowed me to get very satisfactory enjoyment from the UE LIVE, where any benefit of an added amp would be negated by the remaining background noise of the aircraft; then sit down at home or at my hotel, plug in an amp, and enjoy the extra benefit in the quieter environment.

This performance seemed to be fairly consistent regardless of whether I used the single-ended or balanced output. If I had a wish here, it would be that FiiO (and other manufacturers) switch entirely to the new 4.4mm Pentaconn standard for balanced outputs. 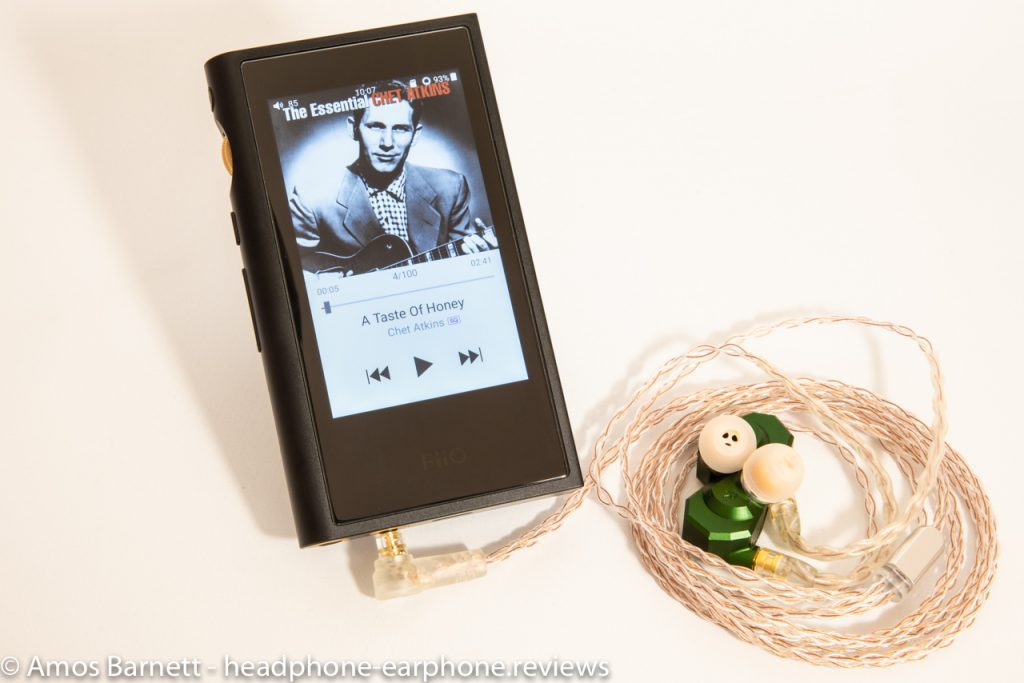 The overall “sound” of the M9 itself was typical FiiO: To the numbers and without coloration (beyond the filter options). Similar to FiiO’s own Q5, apart from when the added benefit of greater output power had an effect, I didn’t notice any particular difference in sound quality. Like the Q5, selecting a digital filter results in a quite subtle change to the music — softer, closer and more organic with the slow roll-off filters, and more precise and wider, if maybe a bit more towards fatiguing with the sharper ones.

I still prefer the more natural sound of iFi’s xDSD or the Chord Mojo for preference. The latter two also can extract more detail from music, not just as a source, but have a greater headphone driving ability, if they are not always as convenient. If I do decide to stack them, the special S/PDIF cable I made to connect FiiO products to them worked equally well with the M9.

As a successor to the X3, FiiO’s Android-based M9 provides outstanding functionality with the addition of bi-direction high-res Bluetooth audio, TIDAL, Spotify and other apps. Apart from a few niggles, such as the volume control slowness and lack of 5G networking, FiiO have done a good job balancing usability and battery life against functionality and power. With the high-res capable Bluetooth audio included, the increase in high-quality wireless headphones, combined with the available software make this an excellent portable solution.

The M9 can be purchased on Amazon via this link.

FiiO has packed the inexpensive M9 with features, including 2-way Bluetooth. I put it through its paces, including taking it with me on a trip to Tokyo.