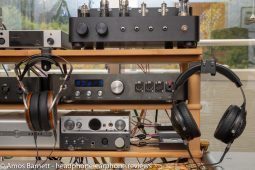 Almost a decade ago now I asked Kingwa (He Qinhua), the owner of Audio-gd about making a version of the headphone amp I had bought from him. He told me that you’d need to put two of them in a large box to do that. However a month later he emailed me with the details of a balanced headphone amp and pre-amp design, the Phoenix, which I ended up owning. Now, so many years later his top-of-the-line amp is the Master 9. Actually, not quite, as there is version with a power regenerator built in, the HE9.  As I already have a PS Audio Power Plant Premier, I decided on the M9, as I was familiar with the house sound, making it a good amp to evaluate a large range of headphones and IEMs with.

The distinct left-and-right of the whole design, with the design literally two mono amps, all the way from the back panel and complete with power supplies and transformers, suggests a serious design from the start. The ACSS labelling on one of the inputs and one of the outputs suggests that this is not your average amp either. Whereas a regular amp has a volume control on switched inputs going to a gain stage or stages, the Master 9 is more complex than that. 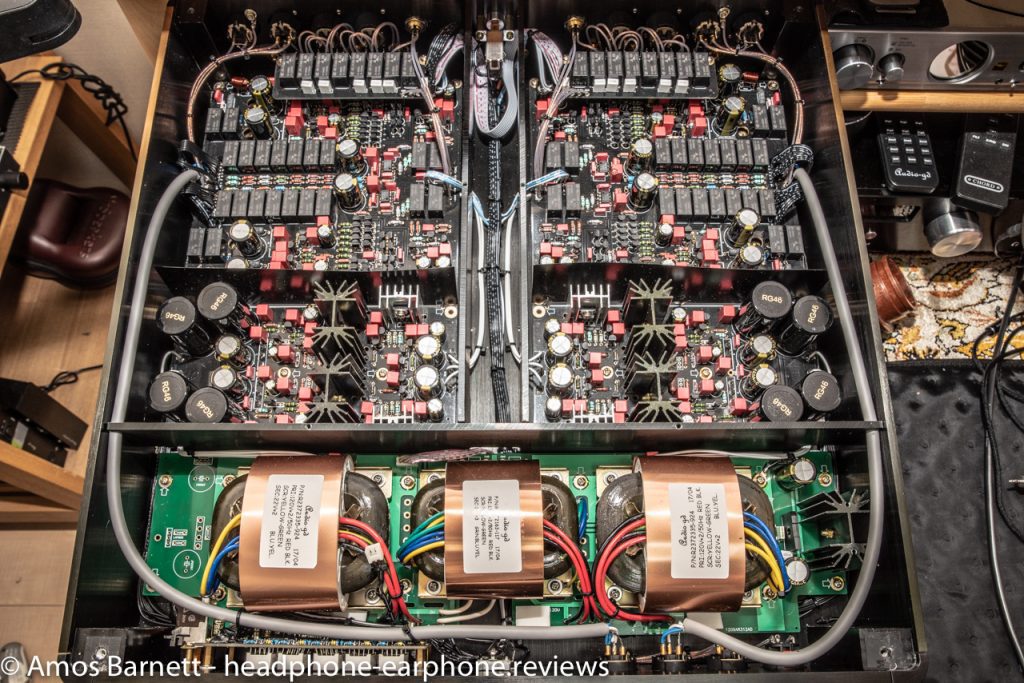 The amp itself is inside a large and quite heavy aluminium case with metal feet. As I am currently using a shelf that is only 40cm deep, not very suited to full-sized hi-fi components, I put the Master 9 on Herbies feet, which also prevented it sliding when I connected and removed cables.

A programmable circuit controls relays for the 5 inputs — two single-ended, two balanced and one balanced ACSS — which then has the input converted to a balances signal (if necessary) before being amplified in current mode, rather than voltage mode, for the lowest distortion possible. If the input is ACSS, that bypasses the initial voltage-to-current conversion (and current-to-voltage conversion in the source) allowing Audio-gd components to be connected as if one device.

The volume control, really a circuit with a programmed series of relays activating a series of resistors also acts as the current-to-voltage converter (avoiding an extra stage) before the final output circuit. Two gain modes are available, programmed into a chip behind the front panel. Initially this also included a 3-second delay when switching inputs, making A/B comparisons difficult, so I asked Kingwa if he could send me a re-programmed chip without the delay, which he kindly obliged.

Of the inputs, those not selected are shorted out, to avoid signals leaking into the circuits. However, as this can cause issues with some components, notably my Schiit Audio Yggdrasil, which would not output a signal correctly on the other outputs if one was shorted, there are jumpers next to the input relays which can be removed as desired to disable the input shorting.

On the output side of things, as well as single-ended and balanced pre-amp outputs, there are “Master” ACSS outputs which use a 4-pin XLR. This is more sensible if one intends to create long cable runs, as the smaller 3-pin mini-XLR plugs cannot fit larger cables.  On the front, my unit came with the old, but now fairly uncommon dual-3-pin XLR headphone set-up alongside a 4-pin XLR and 6.3mm socket.

Personally I think that 3x 4-pin XLR sockets would have been a better option, with the sockets mounted behind the chassis, and minus the catches. This may not be possible, as the space behind the sockets is quite a tight fit, with the transformers close. With any luck a major manufacturer will make full-size 4.4mm Pentaconn sockets, which would make a good replacement. 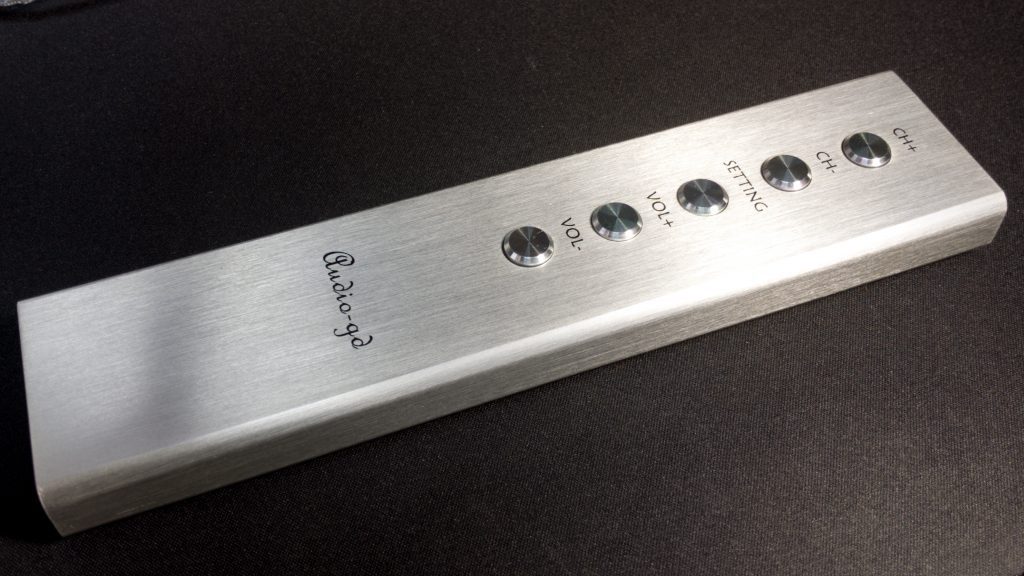 The Master 9 comes with a heavy aluminium remote control which has buttons to select the channels and control the volume. There is also an unspecified “Setting” button which I forgot to ask about before requesting a chip with the channel delay removed, so the fact that it does nothing more than make the display flash could be partially my fault.

Of the functional buttons, I only have issue with the volume control, which can only increment in single steps per press. Pressing and holding has no further effect.

The volume has 99 levels, both in high and low gain mode, with the former ramping up faster than the latter. Thankfully the volume control on the front allows quickly ramping up the sound, requiring me about 6 seconds of effort to go from 0-99, the unit clicking away quite noticeably as the relays were switched in and out.

Like other Audio-gd components I had here before, the sound was best after it had been on a few hours and the unit had been warm for a while.  Likewise, while experience suggested that, fresh out of the box it should have at least a couple of hundred hours of use (or more) on top of the factory 100 for best results, it sounded good out of the box. Unfortunately I was too busy switching components around to pay serious attention to whether the sound changed in those initial hours.

The best way I can describe the Master 9 is that it does the least to impose any kind of colouration on the sound of the amps I have here. Whereas the NFB-1AMP did this as well, the Master 9 presents the music with more space and detail and as with it, I would find myself listening to the music, down to the fine details, and not thinking about the amp.

The down side to this is that it would, as a consequence, reveal flaws in up-stream components. The slight dryness of Schiit Audio’s original Yggdrasil was readily apparent, for example, whereas a slightly warm selection of tubes in my Studio Six made for a nicer, more synergistic pairing. Likewise, when comparing the Yggdrasil Analog 2, I could readily discern the improvements to the sound quality, along with the slight bump in the mid-bass that gives it a touch of warmth.

On the contrary, the wonderful musicality of the R2R 7 DAC was a great pleasure. How much this was enhanced by the ability to use the ACSS connection I could not readily discern.  Some of this may have been the necessity of warming up both units for best results, as well as a number of firmware changes in the DAC which changed the sound.

In terms of detail, it had the edge over the Soundaware P1, all the more so if I was comparing them plugged into a regular power point rather than the Power Plant Premier — the bigger power supply of the Master 9 having the advantage. The inverse of this was that the P1 could be more pleasant to listen with, having a touch of sweetness and making listening with some sources more pleasant.

The Audiovalve Solaris, which did quite a good job with the HiFiMan Susvaras, came through as a touch less detailed to my ears, but the Master 9 wasn’t such an enjoyable match with those hard-to-drive headphones, as the more “flat” presentation made the Susvaras seem more boring to me. The Solaris seemed to drive them without effort, bringing out more of the bass, while the Master 9 seemed to deliver sharper, but leaner bass.

The Studio Six was harder to compare, given that it is single-ended only and the Master 9 balanced, but it came closest when it came to detail retrieval, but allowed a touch of warmth to enter through judicious tube selection. It is, however, more than double the price — triple if you include purchased tubes.

The one place where the Master 9 lost out was with my Focal Utopias against the direct output of a Hugo 2, where it lost some of the subtle, but readily discernible magic that the FPGA-based DAC is capable of.

Where the Master 9 does shine is the seemingly total blackness out of which music comes. It does this to a degree that even plugging in IEMs, there is nothing (or very almost nothing with the sensitive Campfire Audio Andromedas) and they are driven with a precision I have not heard from any DAP or headphone amp, possibly excepting the Hugo 2.

As a pre-amp too, which I tested with my ADAM ARTist 3 active monitors, the Master 9 just gets out of the way, imposing almost nothing, the space and dynamics of the music coming through as clearly as it does with headphones.

There is a delicious contradiction in the Master 9, in that it is a complex and versatile amp with the simplest of goals, which it achieves without imposing itself on the music. For an amp or pre-amp which aims for transparency it succeeds very well. However it doesn’t have the musicality that some tube amps can deliver, so care should be taken when system matching. 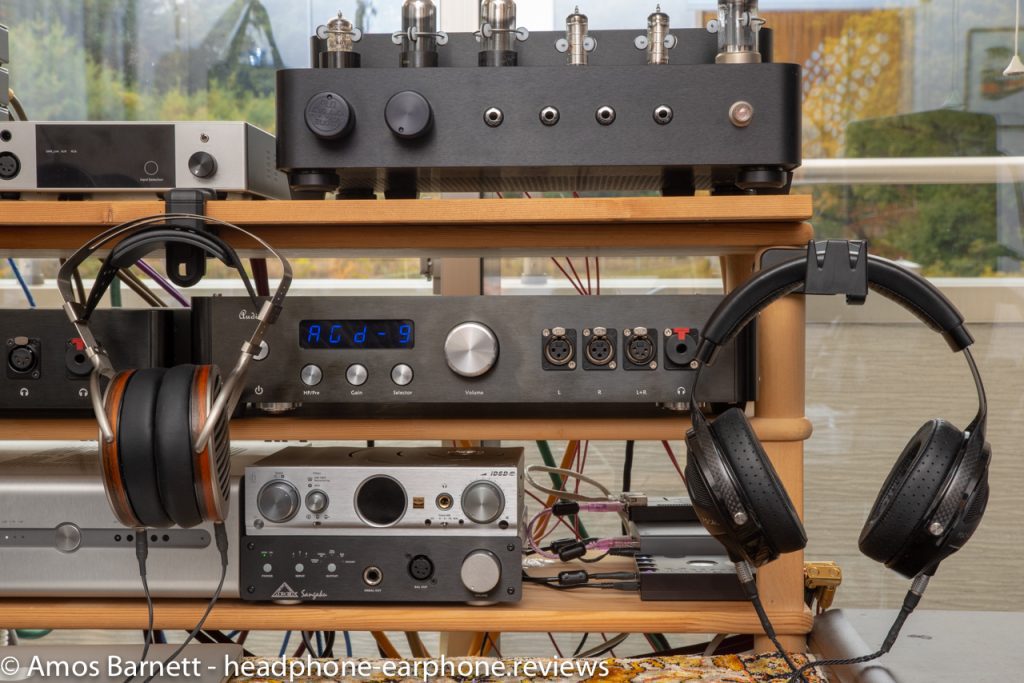