What do you do when your flagship product is an outstanding hit, and it is already the very best you can do? How do you do even better? This was the dillema Ken Ball of Campfire Audio (and ALO Audio) had when coming up with his new flagship, the Solaris.

After a bit of hit-and-miss with their first round of IEMs, with the Jupiter at the helm, the subsequent flagship,  the Andromedas, were a huge hit. Despite the rather edgy shell, the 5-balanced-armature IEMs became an IEM standard. The slightly warm tuning that gave JHAudio Roxanne-like performance at a lower price was just what many people were after.

With a pure balanced-armature IEM taken to the limits of what Ken was able to achieve, he focussed on dynamic driver IEMs, first with the thunderously entertaining Vega, then the larger driver Atlas, which took what he had achieve with the Vega even further.

Like the other IEMs, the Solaris includes a quality cable, the result of Ken’s years of designing and selling headphone cables, and undoubtedly part of the success of his designs. WIth the Solaris, the silver-plated copper cable is a slightly heavier gauge version of a previous design, and a distinct step up from the cable included with the Andromedas and Vegas.

The Solaris arrived in a gold-flecked, “starry” cardboard box with the serial number on the outside. The IEMs themselves are inside a high-quality leather zip-up case, larger than that supplied with the Andromeda, Vega and Atlas. Lined with faux sheepskin, it is too good, triggering memories of my father’s ancient bags and cases, made in an era when products were built to last. Non-leather versions of the cases are available.

Another recent addition to the lineup is a special dual-pouch drawstring bag for IEMs, allowing them to be kept from banging together.  The IEMs themselves arrive in one of these pouches, cables connected.

Despite using a larger guage wire than before, the cable is still pleasantly flexible and includes memory wire. Like good ol’ Damon of Head Pie did, I elected to remove the memory wire, as  it was less trouble and easier to change between IEMs not having it there. Any issues with the IEMs staying in place were easily handled by using the choker built into the splitter. I also listened with the Ref 8 cable which Ken had provided me with previously.

Included tips are foamies, some wide-bore silicon ones, and a set of Final Type 5 tips from Japan. The latter I used for most of my review, along with the JVC Spiral Dot and Spinfit models. Along with a standard IEM cleaning brush, a Campfire Audio pin is included.

While fit with a single dynamic-driver IEM is relatively easy, given the shell tends to be a reasonable size, the Andromeda was more challenging, not helped by the design Ken chose. Then again come hybrid IEMs, as they have to fit both types of drivers inside a single shell. The uniquely sculptured design with a nozzle extending significantly from the body of the Solaris is the result. Ken wrote on Head-Fi:

I did a lot of testing on the fit, The fit on the Solaris and its design. This design was made to fit a much wider variety ear shapes and depths. The neck is longer than our other IEMs so if you require a deeper insertion this with allow for the main body of the IEM to not rub or cause sore spots, the main body is pulsed back just a bit. This was the main issue a small percentage of customers said that the Andromeda was not a perfect fit. If you do not have a ear shape that requires a slightly or deeper fit then the Solaris will just have more of appearance of it sticking out a little further. Also the sculpting on the body of the shell, I think someone made a funny and called it “ribbed”, these sculpting lines are not a issue.

I agree with your observations, visually it does “look” like it might not fit so well but when people put them in they are almost always like, “oh wow great fit” so we hope this works for more people. Of course as I have said in the past a “universal fit” IEM is almost never fully universal.

When I inserted the Solaris into my ears, for the most part the body didn’t even touch any part of my ear. Where it did, the touch was slight. Observing the result in a mirror, I look like something resembling the communications officer of Star Trek.

Though unnecessary for me to get a good seal, I tried pushing the IEMs quite a bit deeper, until the outside body was almost flush with my ear. Then the body did touch parts of my ear, but it didn’t feel uncomfortable.

Ken advised me that the Solaris needs a lot of burn-in time, suggesting that even after 150 hours they keep getting better, so I ran them in for a continuous week on music, and once with the Tara Labs burn-in track overnight at the suggestion of a Head-Fi forum member. During that time, listening about once a day, the primary difference I noticed is that the bass settled down.

A week having passed, I settled into more serious listening. Starting with an Astell&Kern AK380, since the Solaris is a flagship, it was quite immediately apparent that they were extremely competent. What nailed this impression home was playing back the same track through the Hugo 2 that I had been listening to with the AK380 and noticing an clear improvement.

From there on, apart from a run through of the Solaris with the FiiO M9, iFi xDSD, Chord Mojo, and various amps, I did most playback with the Hugo 2. The Solaris has a sensitivity of 115dB SPL/mW, which is very high. This was enough to pick up hiss even from the Hugo 2 (noting that mine is a first production and ex-demo model and this may not reflect current production). It wasn’t enough of an issue that I felt to use an impedance adaptor, however. 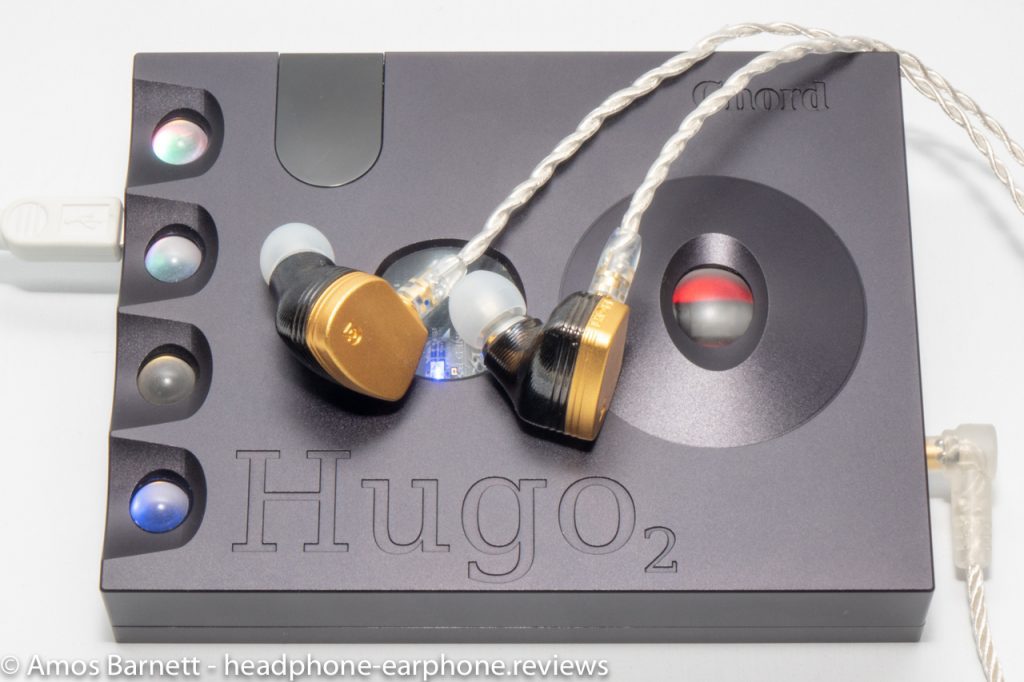 With some deviation depending on tip selection, likely as a consequence of the effect on the dynamic driver, the sound signature is warm to various degrees, with an upper-mid/lower treble emphasis. The bass can be thundering when required, and the mid range is a touch recessed, but not like the Atlas. The upper mid-range is forward, very dynamic and very detailed, and the treble a bit, but not excessively stronger than the Andromedas, but of similar, excellent quality.

With wider-bore tips, such as the ones included, the bass can be dialled back if desired, though I found that with my pair to be unnecessary, and settled on the Final Type 5 tips for most of my listening. In noisier locations, the default foam tips may be more preferable.

I distinctly remember saying to Ken how cohesive the sound of the Vega was when I first it in Tokyo. Taking that thought, the Solaris moves to another level beyond “cohesive”, being that each aspect of the sound of a recording, even each instrument, is emphasised fully and distinctly. Even though the upper part of the mid-range comes across as forward, the music comes through with a sense of space and openness.

Where this works perfectly is with quality live acoustic recordings. Be it rock, jazz or anything else, if it was recorded in a live venue, you absolutely feel it through the Solaris. Standards such as Take Five, or Sunday at the Village Vanguard are magnificently rendered, with each note brought up close and personal.

For example, This Here performed by Cannonball Adderley in Tokyo (from The Very Best of Jazz album) is fantastic in how the cymbals are delivered with perfect clarity even while Nat Adderley’s trumpet is blaring.

The Jex Saarelaht Trio’s Live at the Edge album is a simple stereo direct-from-tape-to-digital recording, by Kostas Metaxas, who is more recently known for making a skull-shaped headphone amp. The space of the recording venue was clearly apparent, with instruments delivered clearly, especially the cymbals, for which I often use this track to test.

Central Park Morning from Dr. Chesky Presents You’re Surrounded, a remake of one of his old classics, not surprisingly is beautifully rendered, the Solaris bringing out both the body of the instruments as well as rendering each of them clearly in the space they were recorded.

Jazz at the Pawnshop was also fantastically rendered, the details of the percussion instruments coming out in their full glory, every bit of every note down to the decay deliciously presented.

Where the Solaris was less successful was with classic pop, rock and metal which tended to be mastered with less bass. Fleetwood Mac, as much as I love listening to them, sounded somewhat thin, and Soundgarden didn’t have enough kick in the bass for preference. For either of those, the Vega or Atlas, with their more thundering bass, were a better choice for both of those. While both the dynamic driver IEMs were less detailed than the Solaris, the music I tend to listen to that they are suited for, such as that mentioned above, tends not to have that amount of detail in the recordings anyway.

Some years ago I met the owner of Tralucent Audio, who wished to create IEMs that duplicated the sound his high-end system delivered. Not surprisingly, he created not too dissimilar hybrid that was lauded for its spaciousness and detail. In much the same way, Ken Ball has created a piece of art that, with the right music and supporting gear can deliver incredible sonic pleasure that otherwise requires high-end headphones or speakers. With acoustic and live music I can’t think of another pair of IEMs that present the music so realistically. Acoustic and live music fans who are after a serious pair of IEMs should put these on their short list.

The Campfire Audio Solaris costs $1,499 and can be purchased here.