The result of all this was that I suggested to Kingwa of Audio-GD that he make a combined DAC and amp in one box for a reasonable price. At the time we were using a cheap Chinese DAC/amp, upgraded with discrete opamps from Audio-gd. The total cost of the amp and upgrades came to about $250.

In the end what became the Audio-gd Compass ended up at about $350. Even after inflation over the last 10 years, the $350 mark is still something of a common target for people wishing to buy their first high-quality headphones system.  It also seems to be price range at which manufacturers are making gear that is above the base level price of $99, or $200 if you consider both a DAC and amp, providing a variety of good sounding components. 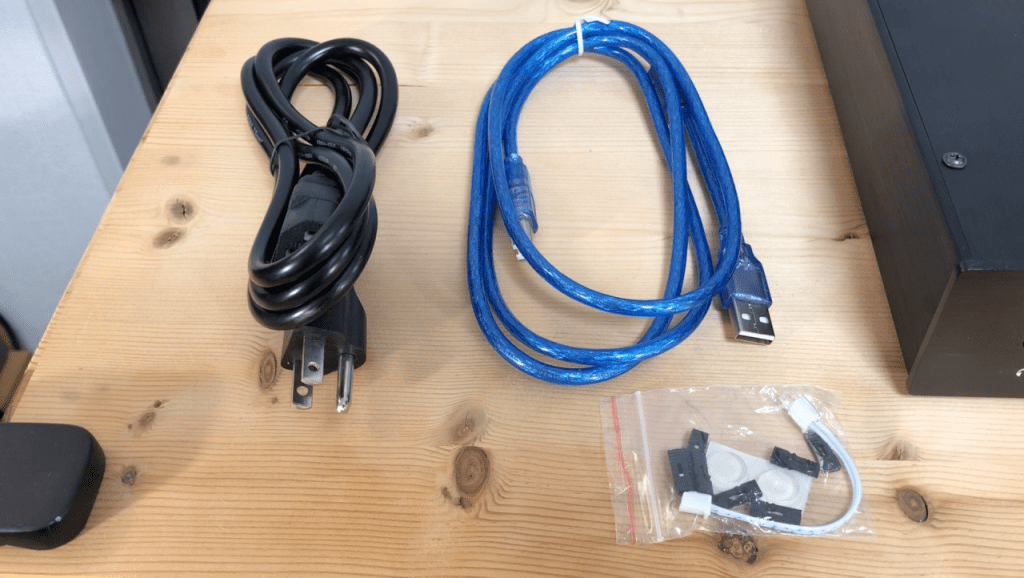 The R2R 11 comes in a single box which takes up about 18x26cm of space. If one were to stick a Schiit Audio Magni 3 and Modi Multibit on top, the remaining space neatly equates to about the amount that is used inside for the power supplies. The Schiit products, of course, use wall warts.

The R2R 11 is well-featured. As well as the usual USB, coax and optical digital inputs (the former accepting up to 384K PCM and DSD256 — useful for those who like to up-sample), front switches allow the selection of two gain modes and headphone or pre-amp output mode. The other, “Fixed” output mode, for using the R2R 11 as a direct DAC, needs to be enabled by opening up the unit and moving a jumper over one pin.

Inside the box, along with the power cord, was a small bag with spare feet, spare jumpers (for internal settings) and a spare LED. While the spare feet are easy enough to attach, installing the spare LED requires prying off the liberally applied glue from inside the front face plate, then gluing (or maybe just blu-tacking) the new LED in place. 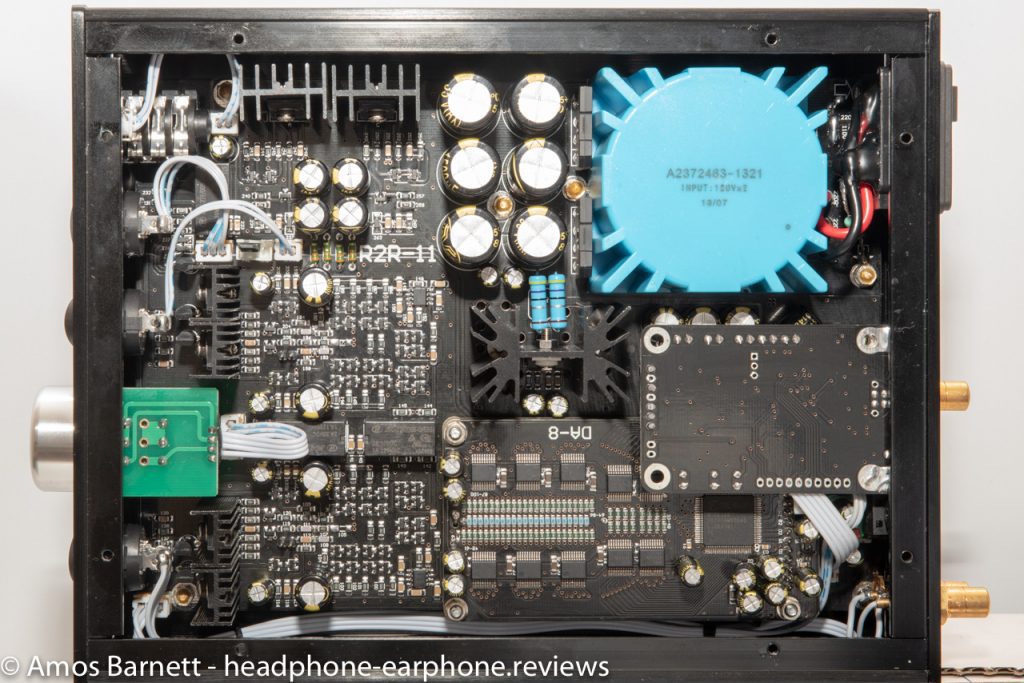 Looking inside the R2R 11 reveals numerous components. Much is the result of the DAC module resistor boards, but also the discrete output stages. While Kingwa could have used an opamp (or opamps) of choice, he has gone with his own design, and these dominate the board space towards the front of the unit.

Included in the amplification is the option to make the sound “warmer” by attaching two jumpers to pins, one for each channel. I didn’t try this option as the sound, at least to me, was fine with the stock set-up.

For the DAC, two DA8 modules, like those in the more expensive R28, are used for conversion. Two sets of conversion resistors are used. The larger set is for converting PCM, while the smaller set towards the back is used for DSD conversion.

Finally, two power supplies are used, one for the DAC and one for the amp. With the USB board squeezed in upside-down at the back, the whole arrangement is quite crowded. 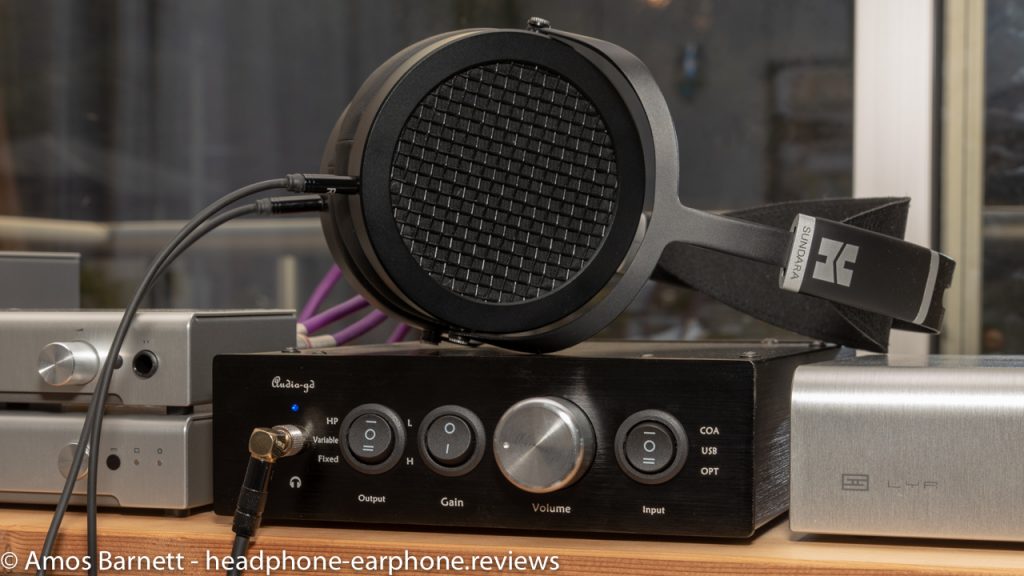 I left the R2R 11 on for a couple of weeks to ensure it got a good 250 hours of use before doing any serious listening.  After that, I tried the R2R 11 with a variety of headphones, including the Focal Utopias, Massdrop Focal Elex, Massdrop Sennheiser HD6XX, HiFiMan Sundaras, Brainwavz Alara, MrSpeakers Ethers and various IEMs.

With 3.5W of output power, headphone drive wasn’t an issue with any of the headphones and most of the performance came down to taste, such as when comparing with the tube amps I had here.

To test noise, I plugged in the Campfire Audio Andromedas and turned up the volume with no music playing to see how quickly I could hear significant amounts of hiss. The knob ended up past 12 o’clock for that, which is good, considering that a moderate listening level had the volume at the 9 o’clock position for me, with anything much higher getting loud, fast.

Not surprisingly, given Audio-gd’s “house sound”, the general tone of the R2R 11 could be described as neutral, with a slight softness. In comparison, a similarly-priced Schiit Audio rig consisting of the Modi Multibit and Magni 3 brought out the music with a slightly sharper relief, and the R2R 11 being more relaxing to listen with.

However, the Magni 3, lacking a gain switch, required turning up the volume quite high with quieter music, something the R2R 11 didn’t require on its higher gain setting. 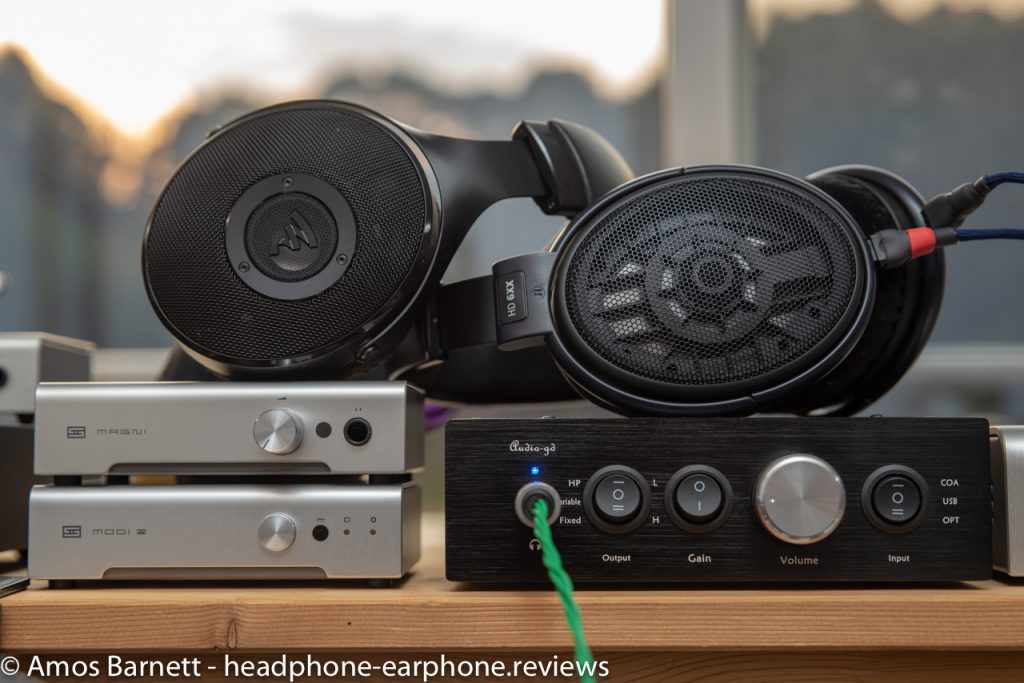 Soundstage and detail-wise, the R2R 11 performed decently with a reasonable amount of detail coming through, though good stereo recordings lacked a sense of depth.  Percussion was improved by connecting the R2R 11 as a DAC to the Lyr 3 or other amps, which improved both the depth and dynamics.

Playing the album Where the Sweet Birds Sang by Magnificat, a challenging album in itself, and listening with the Focal Utopias, the overall feeling was of a naturalness to the sound, but one slightly constricted. Switching to a Chord Mojo in comparison, the music seemed to float from the headphones with a relaxed ease and precision.

Likewise, its neutrality wasn’t quite as entertaining, at least in comparison, to using it as a DAC to one of the tube amps, such as the Lyr 3 or Vali 2, but it demonstrated the musicality of a basic R2R DAC.

I also plugged it in as a DAC/pre to my main system, consisting of an Audio-gd Master 10 and ELAC FS247 speakers, where it did an acceptable job as a pre-amp. I think in this case it would be most suited for use with active speakers, such as the ADAM ARTist 3 that I used to have on my desk, or similar speakers from the likes of Emotiva.

For preference for a relaxing desktop rig, I might choose a Vali 2 and a nice tube, mated with a Modi Multibit. But that ends up over $450 — maybe even closer to $500 if I buy a Western Electric 2C51. The R2R 11, on the other hand, has features that the Schiit Audio system doesn’t, and is at least $100 cheaper.