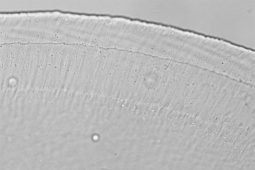 Your ear can detect vibrations less than the width of an atom. Scientists now know why.

The human ear, like those of other mammals, is so extraordinarily sensitive that it can detect sound-wave-induced vibrations of the eardrum that move by less than the width of an atom. Now, researchers at MIT have discovered important new details of how the ear achieves this amazing ability to pick up faint sounds.

Both the ear’s sensitivity and its selectivity — its ability to distinguish different frequencies of sound — depend crucially on the behavior of a minuscule gelatinous structure in the inner ear called the tectorial membrane, which Freeman and his students have been studying for more than a decade.