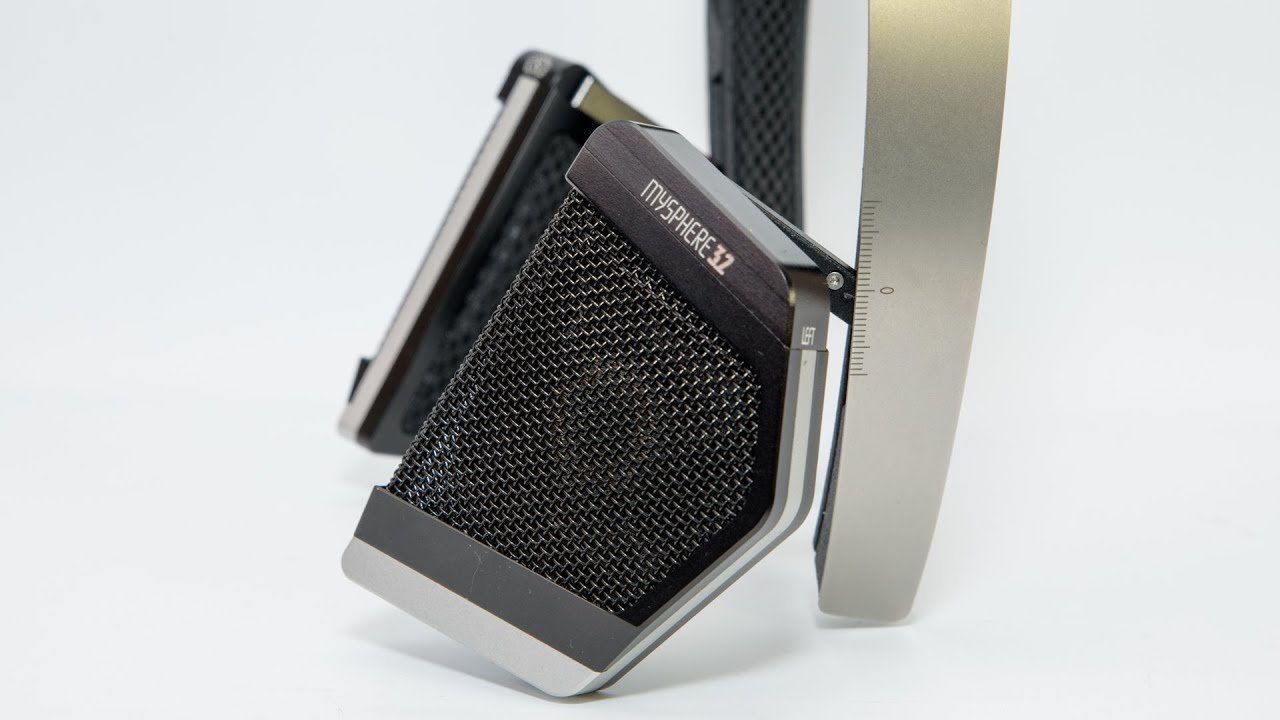 MYSPHERE – The AKG K1000 successor is like speakers on your head

Some years ago, one of the original engineers of the famous AKG K1000 popped up on Head-Fi, Heinz Remmer. The response to this pleasant surprise was, as well as discussion of the technical aspects and issues with the K1000 design, a desire that they be manufactured again.

The result has been the MYSPHERE, which comes in not one, but two variants, consisting of the 3.1 and 3.2 drivers. Like the K1000, the drivers hang on hinged system allowing them to be angled away from one’s ears to progressive degrees, resulting in an effect akin to speakers. 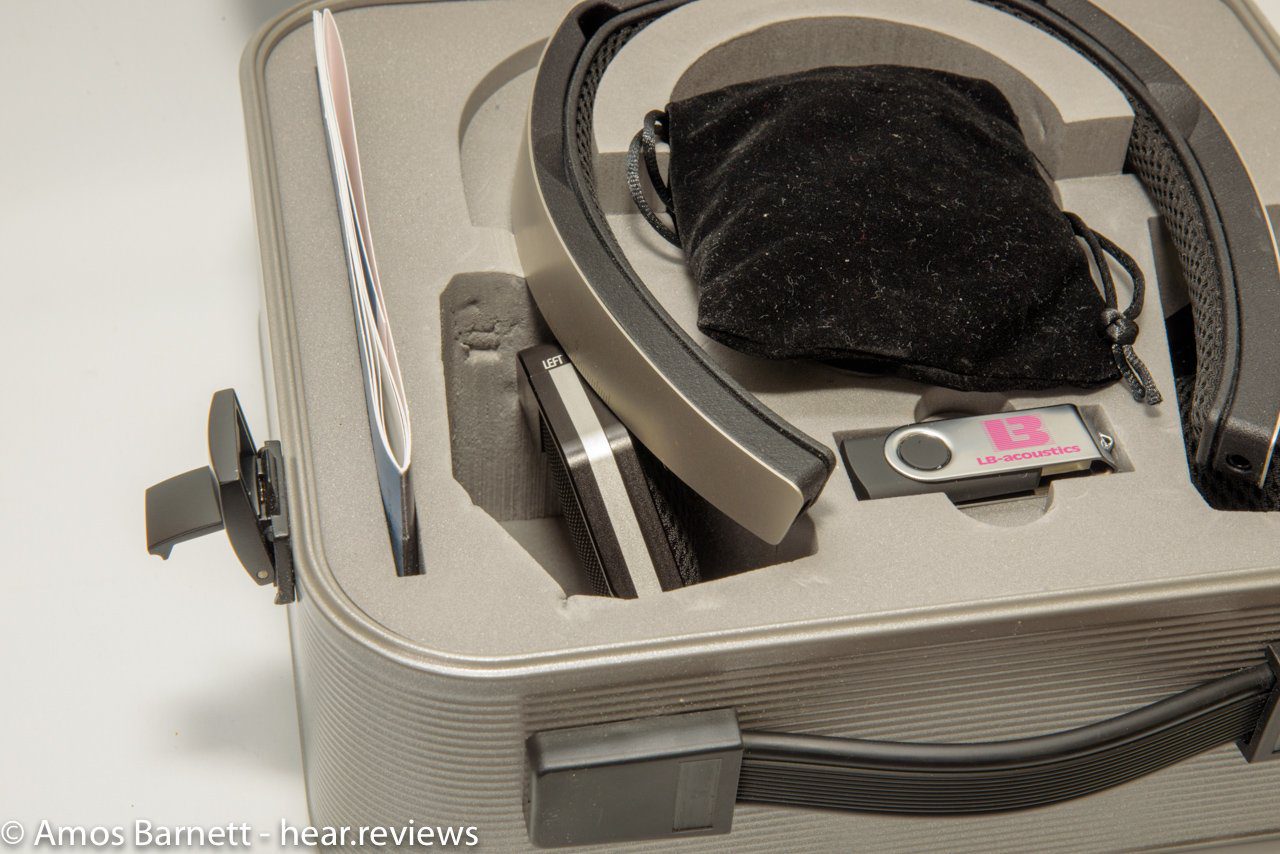 While that may seem straight-forward enough, the design and requirements are anything but. The drivers are completely unique, sharing only with conventional designs that the drivers themselves are dynamic.

Unlike a conventional driver, the MYSPHERE uses a quadrangular-shaped driver with a radial magnet system to avoid non-linearities in its movement. This driver has a large, 4mm range of movement, sufficient to move the amount of air required of a driver that is going to be far from the listener’s ears, and not in an enclosed space.

The drivers themselves are held in a precision milled aluminium frame to which earpads are attached, themselves housed in their own, precision milled frames. That whole assembly connects magnetically to the main headphone frame, the magnets pressing contacts against conductive strips that are attached at either end of the frame to a 3.5mm, 4-pole socket.

Inner head-pad pieces can be readily popped out to facilitate changing the drivers, of which there are two types: The 15 Ohm 3.1 drivers, and the 110 Ohm 3.2 drivers. While those impedances may seem fairly conventional, the drivers themselves are extremely sensitive, in the order of 96 dB / 1 mW RMS or 115 dB SPL/V. This means that, while they require almost nothing in terms of actual power to get to high SPL levels, they absolutely need an amp with speaker-amp levels of driver control.

The pair of MYSPHERE sent to me came with cables for 6.3mm, 4-pin XLR, 2.5mm and 3.5mm. While the former two were rather long, and the latter two quite short, 4.4mm connections and desired lengths are available upon request. Being able to plug the cable in on ether side of the head, essentially behind one’s ear turned out to be suitable, at least for me, for good comfort.

In use, the headband is placed at an angle on one’s head, forward at top and going behind one’s ears at the bottom. This places the drivers at the correct position relative to one’s ears. The drivers slide up and down (hence the contact/track system internally) to allow perfect positioning. Marks on the side allow one to remember the set-up for the future.

This set-up has two disadvantages: Firstly, the thin headband is not as comfortable as regular headphones and isn’t good for long listening sessions, pressing, as it does, on top of one’s head. Secondly, like conventional speakers, the positioning must be pretty much perfect for the ideal sound to emerge. For the latter, MYSPHERE includes reference tracks for setting up the headphones. 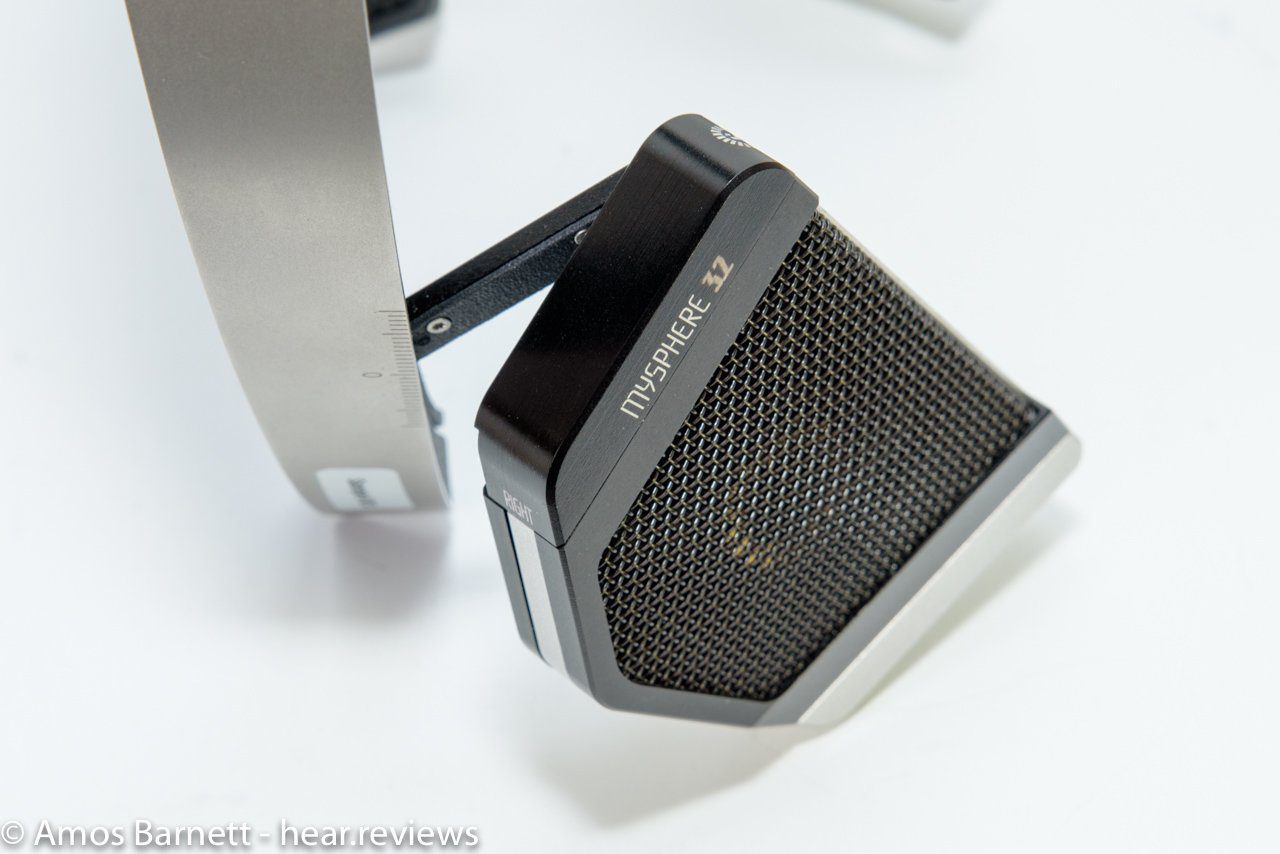 Once set up, the drivers themselves can be tilted either in towards the ear, for a more “headphone” like experience, or away from the ear for a more speaker-like sound. While for the mid-range and treble this doesn’t effect the sound to a large degree, tilted away from the ear, the low bass is lost, resulting in something akin to the presentation from bookshelf-sized speakers.

That sound itself, from a headphone listener’s point of view would be considered as mid-forward, rather more like Sennheiser’s HD650 (or the Drop HD6XX). Compare that to the slight v-shaped sound of an approximately “neutral” pair of headphones.

The AKG K1000 had a design that dropped the upper mid range a bit, but the MYSPHERE doesn’t include this. The result being that if I play music through my speakers and through the MYSPHERE at the same time, then put on or take it off, I don’t hear any difference in frequency response (ignoring the low bass for the moment).

Finding suitable amplification became a challenge. The Audio-gd Master 9 was up to the task, but just about everything else, except a Schiit Audio Lyr, was not. Chord’s Hugo 2 did well (it can actually drive sensitive speakers) but all the DAPs I have here could not control the drivers well, and so I stuck with the Hugo 2 for most of the rest of my listening. 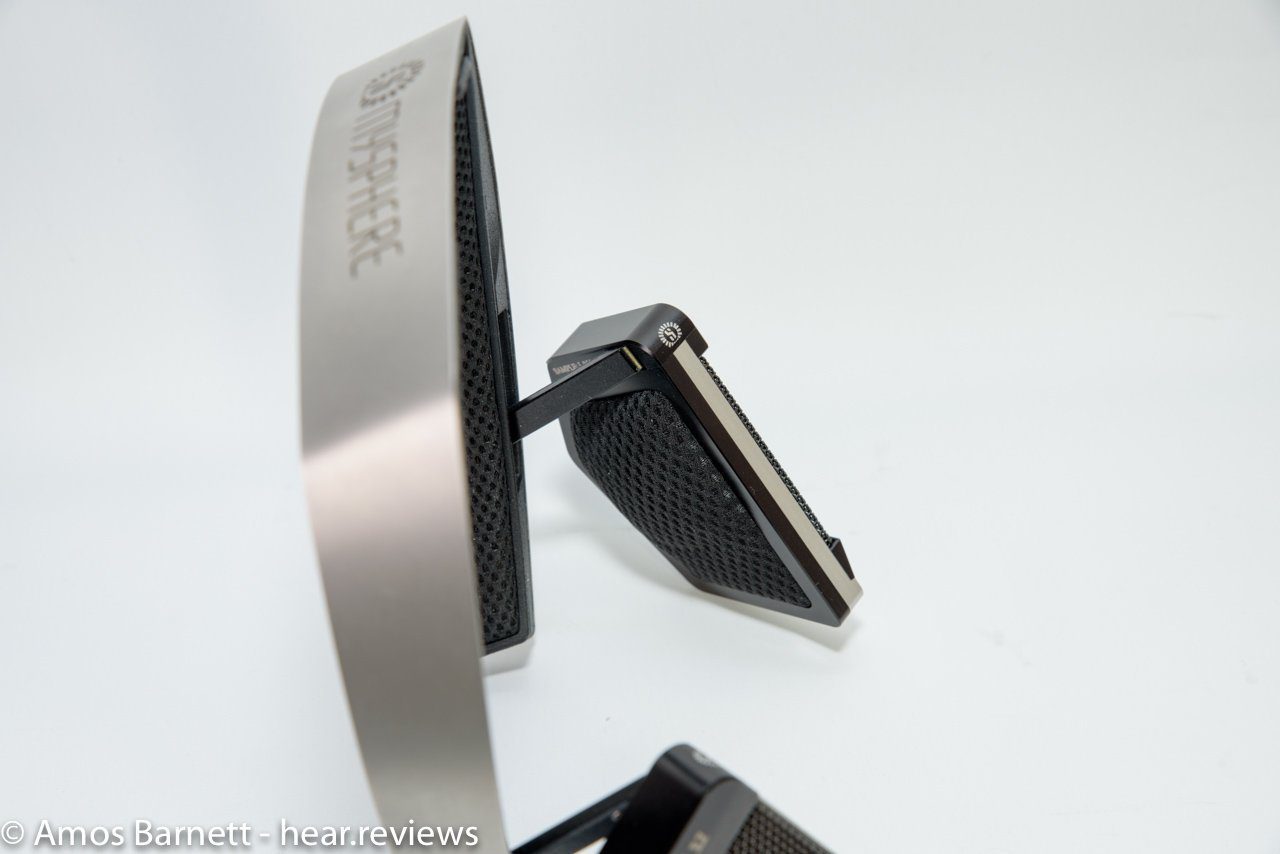 When poorly driven, the headphones become extremely shouty in the mid-range, and the bass is boomy and out-of-control. When driven well, the bass is tight. The 3.1 seems to be more mid-range focussed and the 3.2 less by a small degree, and tuning also depends on which earpads are used, as two were included in the box (and a third, which give a better bass presentation are now available).

If using a speaker amp, the 110 Ohm 3.2 is a necessity, as a speaker amp will blow out the 3.1’s drivers. With portable gear, the 3.1 is better suited, as less of a voltage swing is required to get the driver moving the large distances it is capable of.

When all is well, the MYSPHERE excel in acoustic, jazz and classical to a degree with fantastic dynamics, just about injecting the sound into one’s ears. Carmen Gomes singing A Fool For You (Native DSD) was beautifully presented, with fantastic, pin-point imaging. It didn’t quite have the intensity I remember from auditions of the RAAL set (which has something akin to an EQ applied in amplification) but after listening for some time, even favourite headphones of mine, such as the Final D8000 Pro and Meze Empyrean sounded boring afterwards.

Where the MYSPHERE was less suited was with anything that requires a good bass thump, or anything with clear mid-range distortion in the mastering, which was simply unpleasant. Massive Attack, for example, was just — don’t bother. Missy Elliot “Secret” faired better, but the thump of the drum didn’t come through as ideally as I would have hoped. Excellent-quality vocals, guitars, other instruments are where it’s at with these, but most suited by far is classical music.

The Bolero: Orchestral Fireworks album, consisting of fast and explosive classical, from Flight of the Bumblebee and Hungarian Dances through to the progressively louder and louder Boléro itself, was spot-on, the MYSPHERE presenting the sheer speed and depth of the sound-field in a way that ordinary headphones mostly cannot.

I couldn’t help think that better set-up than mine would probably involve vinyl, and a speaker-capable tube amp for more musicality, and a bit of forgiveness in that forward mid-range.

If I were purely a classical listener with no space for speakers, I might be enamoured by the MYSPHERE. When it shined, it did so fantastically, though musical all-rounder it most certainly is not. If your tastes are more towards acoustic, and especially classical, the MYSPHERE are well-worth auditioning, as loaner pairs are available for this purpose. Heinz Renner is always readily on hand to answer questions about suitable amplification and set-up and which of the 3.1 and 3.2 to choose.