A couple of years ago, Hiby came out with the original R6, at the time the most powerful DAP available, at least in hardware specs, if not audio output. With a higher resolution screen and more CPU power, unlike other Android-based DAPs that would stutter if you tried to multi-task with them, the R6 was speedy to use.

Since then, other makers have caught up — many of them Hiby’s customers, as Hiby is the OEM providing music players to other brands. So, it was with interest that I have had the chance to review the new version. The question on my mind was: Is this another revolution? 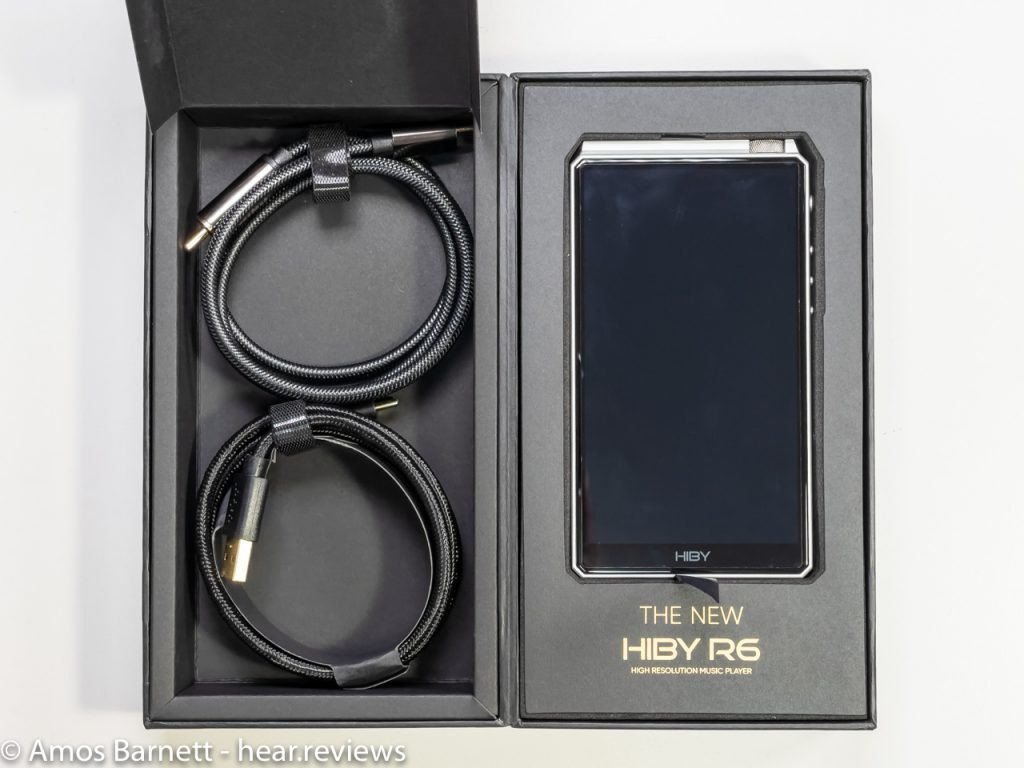 Externally, the R6 is fairly conventional, with the requisite power, play, forward and back buttons on one side, a micro-SD card slot on the other, a volume control on top and ports on the bottom. Some nuances abound, with the volume control neatly recessed so that, while it is easy to turn, it is unlikely to do so accidentally if put in a pocket.

However, the sharp edge near the volume control is a bit uncomfortable, and wouldn’t do well to not do a bit of damage put case-less into a pocket or bag. Investing in the original leather case, or a suitable alternative if one exists, will be worth considering here.

The standard leather case, incidentally, won points with me for having a velcro opening, making it far more easy to manage installation and removal, and allows plenty of room for accessing everything except the micro SD card.

Of that, the single micro-SD card slot will not be enduring to those who wish to take a huge quantity of music with them. However, Sandisk makes up to 1TB cards, and Samsung up to 512MB. There are a couple of other reputable companies out there when it comes to micro SD cards, but beware of an ongoing scam on Amazon whereby obscure or no-name brands flash low-capacity cards to indicate more capacity than they actually have, and are selling them off cheap. See my video about this.

The more significant features of the R6 are the ports. As well as the standard 3.5mm and (new) standard 4.4mm Pentaconn balanced port (my recommended combination of headphones sockets for audio gear going forward), a duplicate set of ports are present for the line out.

While Pentaconn 4.4mm to XLR cables are not quite as ubiquitous as 3.5mm to RCA cables are, it does allow for the R6 to be used as a balanced source for an amp or active speakers. This iterates the trend for Chinese DAPs to be useful as both portable and home system components. Combine this with the Hiby Music app remote-control function and you have what amounts to a portable streamer, at least to some degree. 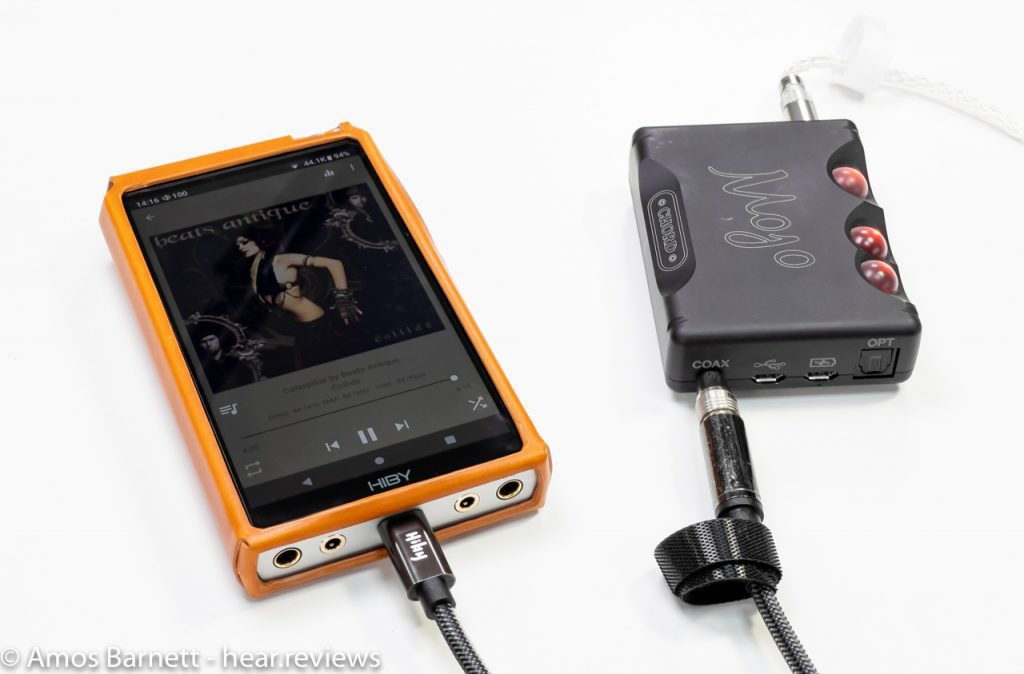 The R6 connected to a Mojo via the included coax cable. Note that I’m using an RCA to 3.5mm TS adaptor on the Mojo end.

Interestingly, the USB-C port is USB 3.1 compatible, unlike other DAPs which are only USB 2. While the usefulness of this is fairly limited, it may possibly be useful to people who wish to sync and update a high-capacity micro SD card while in the DAP.

Unlike the FiiO players, which have Android 7, the R6 2020 has Android 9, and includes screen auto-rotate, which can be switched on and off easily via the pull-down menu.

For interest, I benchmarked the R6 and M11 Pro using Geekbench. The newer hardware in the R6 shows it to be more powerful, though for music playback usage there would be no effective difference. However, the more powerful hardware, albeit equivalent to an old phone, would be beneficial for showing content on the 1080-capable screen.

As much of the software is standard Android 9, and anyone can download the Hiby Music program onto their phone to check out (if it does have a couple of features vs. the version included in the R6). I’ll just mention a couple of useful features in the software.

For starters, the R6 has a 1080 screen (compared to the 720 screen on the M11 Pro) and two-way Bluetooth 5, which was good timing for me as I could use it with the Drop Panda headphones which just arrived.

As well as the remote-control system available, the Hiby Music app is feature rich and can stream over a local network easily, such as from DLNA servers. My IOS version even showed Dropbox and OneDrive, the R6 version didn’t show either. This may require that you have those apps already installed for them to show up.

The Hiby Music app is designed to bypass the Android audio stack and output bit-perfect to external devices, and to this end has settings to ensure reliable behaviour with a variety of equipment.

For example, while not as comprehensive in options as UAPP, there are a few settings for USB digital audio output, such as limiting the bit rate, useful if you have a device that doesn’t like 32-bit digital input, which I’ve sometimes encountered.

The app is also known for not only its EQ, but the MSEB settings, which act as a kind of “EQ for Dummies”. With settings to make the sound darker, lighter, thicker and thinner and the like, it’s good for people who want a simple solution. That being said, some of the options are rather amusing, like the “Female Vocals” setting, which allows one to “Detox” them or make them “Intoxicating”.

Usefully, the MSEB, DSD gain compensation, channel balance, max volume, gain and digital filter settings are global, accessible via the Android system audio settings, allowing them to affect other apps. Unfortunately, the EQ is not.

If using UAPP, or other apps such as Spotify, TIDAL, Qobuz, Roon etc. is desired, getting the version of the R6 with the Google Play Store is best. I initially wondered why the R6 is available in two different versions, one without the Play Store, but I guess this is for selling to people who can’t or don’t want to use it, and would rather use another store or side-load apps. 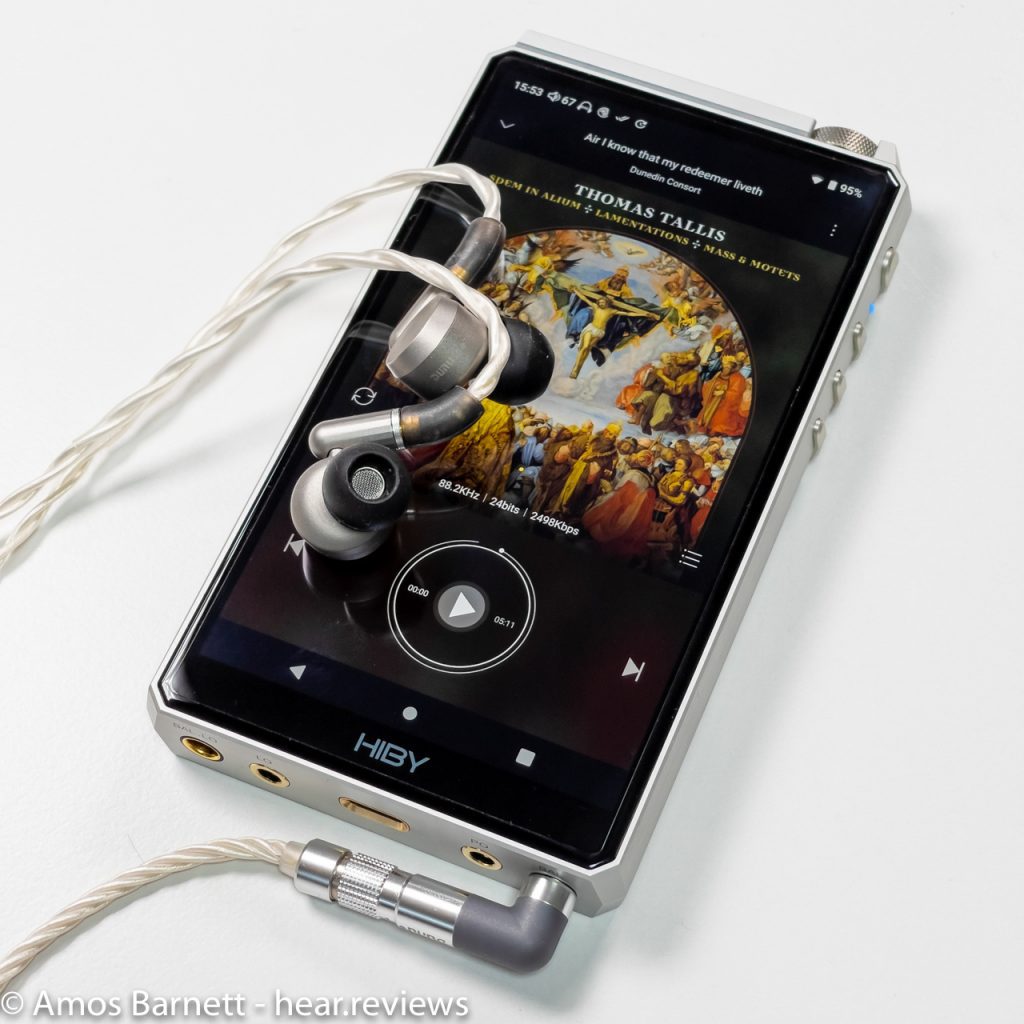 I primarily compared the R6 to FiiO’s M11 Pro, which is in a similar price bracket. As a quick overview, the M11 Pro uses an AKM4497 DAC and THX-based amp, while the R6 is ES9038Q2M-based with a custom amp set-up.

First, I did a hiss test, using the most sensitive IEMs I have here, the Campfire Audio Andromedas. Playing a track of pure silence (as the amp module turns off after the music stops) I found that the hiss level was lower than the sound of the blood flowing through the veins in my head, so that’s well-and-truly a “pass” there.

In recent times, while there was a push for amps to have a low output impedance as possible, this resulted in higher hiss levels from some players, reducing their capability somewhat as portable devices. Having an output impedance of a couple of Ohms fixes this, while unlikely to affect the frequency response of even multiple balanced-armature IEMs that often have a wildly varying impedance-vs-frequency response.

In short, the R6 provided about the same level of performance as the M11 Pro — in line with the kind of performance you’d expect from a DAP at this price level. It had no trouble driving any IEMs I have here, from the multiple-BA Campfire IEMs through to single-dynamic driver models from DITA, HiFiMan, DUNU, Campfire or Final, all of which it delivered an enjoyable musical experience admirably well.

It was not as capable of retrieving detail as the more expensive Cayin N6ii I reviewed recently, with fewer fine nuances of the music coming through. In comparison, the R6 sounded a very slight bit more aggressive than the AKM/THX-based M11 Pro. Typical of Sabre-based designs, the New R6 sounded like it had a touch more presence in the bass and treble.

When it came to full-sized headphones, as with all DAPs, performance was fairly typical. If you’re like me and don’t listen that loud, the R6 had enough capability to drive planar headphones at least basically well.

It was only when pushing up the volume towards maximum that it started to become shouty and lacking composure, a bit grating on music such as the Palladin Ensemble’s The Devil’s Trill, which is violin-based and very much not something you want to sound even the slightest bit harsh. It did slightly better in this regard with high-impedance headphones like the Drop Sennheiser HD6XX.

The M11 Pro faired slightly better in this regard, losing composure a bit later, but neither were as good as using the line out to a Headamp Pico Power, which with 18V of power dedicated purely to headphone drive, brought out more nuances in the music at both moderate and higher volumes using headphones.

Like the original R6, the new R6 breaks ground with faster hardware, a better screen and a dedicated balanced line out, and performs sonically very well. As always, I recommend selecting a DAP based on feature set as much sonics, so if the better hardware, USB 3 and dedicated balanced line out suit you, and you’re after a mid-range high-end Android DAP, then then Hiby’s New R6 may well be a good choice.

The Hiby R6 can be purchased from the following locations (some links may pay me a commission from the sale):