The Micro iDSD Signature was sent to me, without any prerequisites, for review.

I’ve long been curious about the Black Label series of portable iFi DAC/amps, given their popularity. Quite a few people have wanted me to review them as well, so when iFi offered me the Micro iDSD Signature, the last, limited edition release of the range, I jumped on the chance.

Externally, the iDSD Signature comes across more as “transportable” than portable, being larger than even Chord’s Mojo/Poly combination. Adding to this is the range of inputs and outputs, the front 6.3mm (1/4″) socket being the most prominent on the front, and the RCA jacks likewise on the back.

With the Signature, a 4.4mm Pentaconn port is added. While the iDSD Signature doesn’t use a balanced circuit internally, this means that you don’t need to use the 4.4mm socket to get full power out of the device. The 6.3mm socket will do just fine for that.

Except for the USB-C power socket on the side, iFi has yet to move away from their strange, if cleverly logical use of a full-size USB-A plug as the main input. While initially odd, it makes sense when you see the included USB 3 extension cable in the box, chosen for its better shielding (the input is only USB 2). 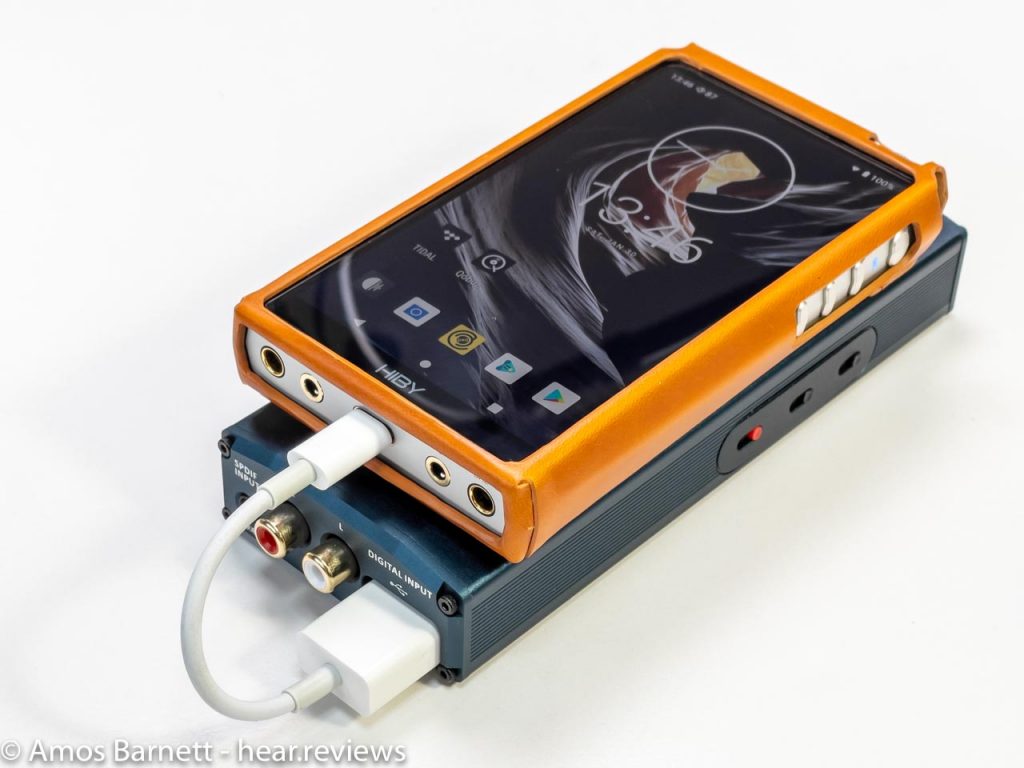 If you decided to do an old-school “stack” of phone or DAP with the iDSD Signature, then all you need is a USB-C or Lightning to USB-A socket adaptor, both readily available. Not to mention, a USB-A plug-socket is more reliable than a USB-C one, in my experience.

If USB is not preferred, a combo 3.5mm S/PDIF and mini-optical jack is included, though the high-res support is somewhat more limited with these.

Speaking of which, the highest input resolutions of DSD512 and PCM768 are only available if you downgrade the firmware to 5.2, and eliminate MQA. Given that these are unicorn formats, and up-sampling to that level will add no benefit above the DSD256 and PCM384 limit with the stock firmware, the point is rather moot. 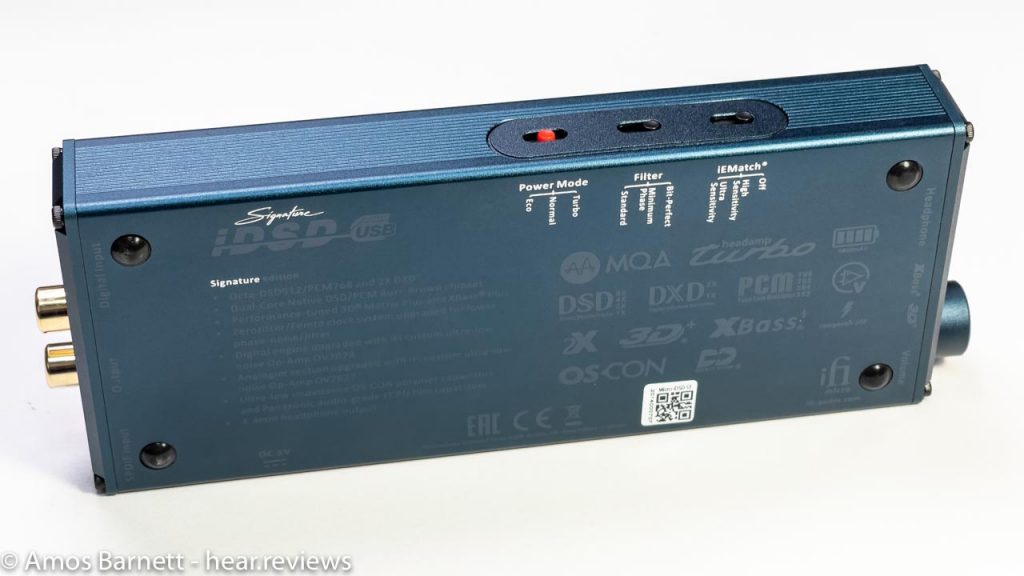 One of the keys to iFi’s popularity has been their inclusion of features such as the XBass and 3D modes in their products. Along with a built-in IEMatch, allowing sensitive IEMs to be used without hiss, and 3 power modes. A digital filter switch is also included, but this has no function with the current firmware, and, like the ultra-high-res input, only works if you downgrade the firmware to the non-MQA version.

The XBass feature adds a nice, but not excessive amount of bass, filling in things nicely with headphones that are more neutral in tuning, such as the Final D8000 Pro, which I used with the iDSD Signature.

The 3D mode, on the contrary, has the effect of brightening the music, even though it uses crossfade and doesn’t change the frequency response, making it sound more open. Combined, you get something of a v-shaped sound, which can be good if you’re like me and listen to a wide variety of music, and tweaking the sound in this way can make genres that are less compatible with one’s headphones more enjoyable.

The three gain modes, labelled Eco, Normal and Turbo, allow one to trade battery life for power, or provide a better range of volume adjustment for one’s headphones or IEMs.

Of that, the volume control is one of the negatives of the iDSD Signature. Including the power switch, it has serious channel imbalance until you get to about 10 o’clock on the dial, leaving little over 180 degrees of movement for volume adjustment, a fair bit less than if a separate power switch had been used.

The other, main negative, is a lack of any indication of battery level. While it’s readily possible to get up to 8 hours, or possibly more, of listening time, not knowing when one is about to run out of battery can be a bit frustrating. The only indication of anything power-related is a light showing that the unit is charging next to the power input USB port.

I usually start with IEMs when testing a portable device, and so I brought out the 2020 Campfire Andromedas to do my regular hiss test. Even with the unit at full volume in Turbo mode with the IEMatch off, the blood running through my head was louder than the minute amount of hiss that was audible, and the IEMatch cut even that! A great pass there.

Powering the Andromedas, while a couple of Ohms output impedance doesn’t usually change their sound signature, the IEMatch seemed to drop the bass a bit in the first “High” mode, with it coming back more somewhat in “Ultra” mode.

This was mildly regrettable, as there isn’t much volume range to begin with in Eco mode, and the IEMatch allowed the volume knob to be adjusted to a more useful position with the Andromedas.

I had the Neo iDSD here at the same time, which provided an interesting, and quite dramatic contrast.. Unlike the Neo iDSD, the iDSD Signature is quite warm and engaging, with a stronger sense of bass presence than even the Chord Mojo, which is slightly on the “warm” side of things. While not providing quite the sense of sharp relief that the Mojo does with good acoustic recordings, the iDSD Signature gives the sound more body, even as a DAC, and makes for very engaging listening.

Full-sized headphone drive is very good for a portable device, with a generally clear and punchy sound, even with the high-end planars I have here, such as the Final D8000 Pro and Meze Empyrean. The results aren’t as good as using a dedicated headphone amp, such as the Schiit Jotunheim, which is on another level altogether. However, sans comparisons, the enjoyment factor is very high with the iDSD Signature.

In the world of portable audio, there are always sacrifices at any price point. Want a conveniently device? You’ll sacrifice power and/or battery life. Want functionality? Fidelity may be the sacrifice instead. With the iDSD Signature you get plenty of headphone-driving power and work-day battery life, but you need a transport, such as a phone, DAP or computer to use with it, and it’s not readily pocketable.

Likewise, rather than the sharper fidelity and wireless convenience of a Mojo/Poly combination, you get an optional bass boost and 3D mode. This is where the iDSD Signature succeeds, in making the music enjoyable, even if not delivering absolutely the most fidelity available as you can get from something like a Hugo 2 or desktop rig.

The D8000 Pro is tuned towards “neutral”, which can make it less entertaining to listen to some music with. Yet, engaging the XBass brings a pleasant boost when some more warmth benefits it, giving the headphones a character more like the Empyreans.

Likewise, I tried the iDSD Signature as a DAC into the ALO Audio Studio Six and Audio-gd Master 9 with good results, the sense of warmth and engagement coming through strongly, adding a sense of joy in combination with the better amplification.

I’ve enjoyed my experience with the iFi Nano iDSD Signature. I understand now why the Black Label version was so popular. Providing plenty of power for full-sized headphones, yet almost complete silence even with sensitive IEMs, the iFi Nano iDSD Signature has a punchy, warm and engaging sound that makes it a joy to listen with, and options to bring out a bit more entertainment from the music.