While other portable player manufacturers have made DAPs with changeable amp modules, the Cayin N6ii is the first I’ve seen where both the amp and DAC can be replaced with alternate modules. Cayin sent one to “Team Japan” (a group of reviewers living in Japan) to review.

If you want a summary of the portable player world, it goes something like this:

Cayin’s N6ii (N6 MK2) is a good example of this, slightly defying my list by having an Android 8.1 system and a good set of features, including, unusually, an 12S output (via a HDMI connector). Most unusually, the DAC/amp section of the player itself is swappable, with no less than 4 modules available; each containing a different flagship DAC.

This means that it is quite a thick and heavy player, though not as large as the flagship N8. The design is similar, if more subdued (though I reckon it wouldn’t have harmed them to give it a gold volume knob). 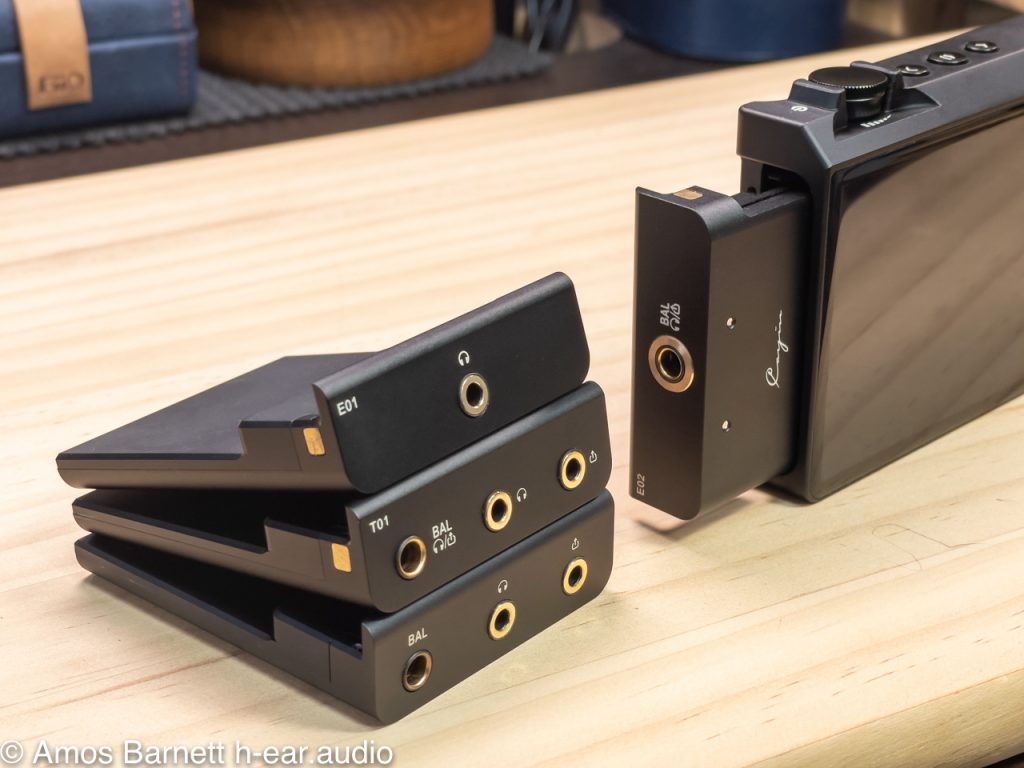 T01 with a BB/Texas Instruments PCM1792 DAC, balanced and SE outputs, and line out.

E01 with an ES9038PRO DAC and a 3.5mm single-ended output via a discrete component amp.

The first two modules are somewhat conventional, with a standard set of outputs, but the E01 and E02 are unique in that they eschew convenience for sound quality with only a single headphone output, powered by a custom, discrete component amp design rather than opamps.

While the player itself can be had with one module for around $1200, the extra modules can cost as much as $400 each, which pushes the price of the player up quite a bit if you want more than one module. 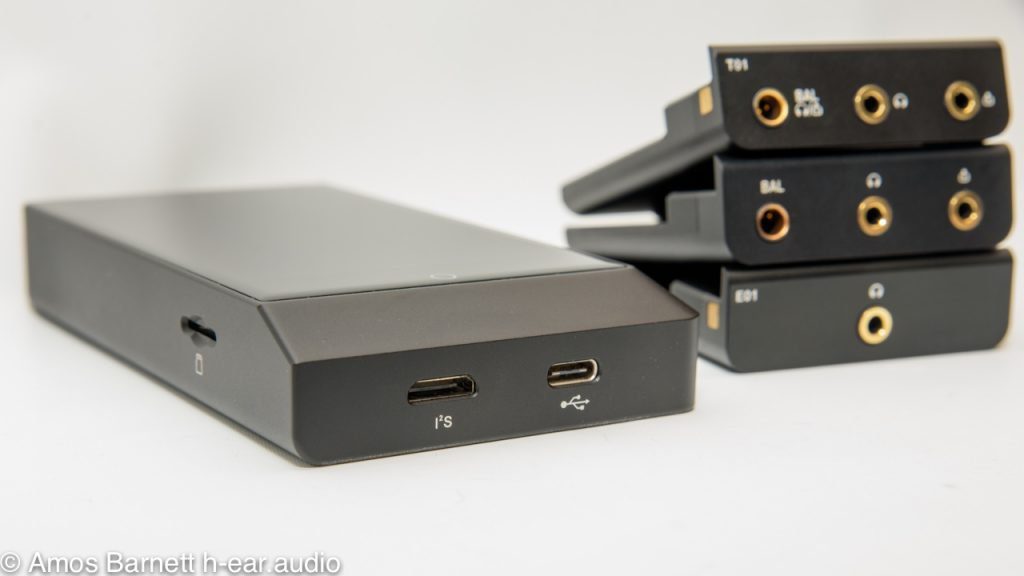 Being a couple of years old, at the time of this review, the N6ii’s hardware falls behind a little, being slower than that of the sub-$1k FiiO M11 Pro and especially the new Hiby R6 2020 version. All the same, the hardware is quite sufficient for most audio use, and isn’t geared towards being used for anything else at the same time.

Like other, dedicated Android-based music players, the software is set up to bypass the built-in Android sample rate conversion. As well as the Hiby-based Cayin music player, the third party UAPP player recognises the audio system and can output bit-perfect playback both through the card DAC as well as through USB (including coax) and S/PDIF.

For S/PDIF, Cayin includes a special cable that uses extra sideband pins in the USB-C connector that are otherwise unused in a normal USB-C cable.

With the Google Play Store installed by default, and side-loading of apps possible, set-up is as simple or complex as desired. The basic set-up is to insert a micro SD card with music, open the Cayin player, and scan for music.

For more experienced people, download your favourite music player through the Play Store if supported, or side-load it via something like APKPure or manually if not. I installed Roon, Qobuz and TIDAL myself, as that is what I use. 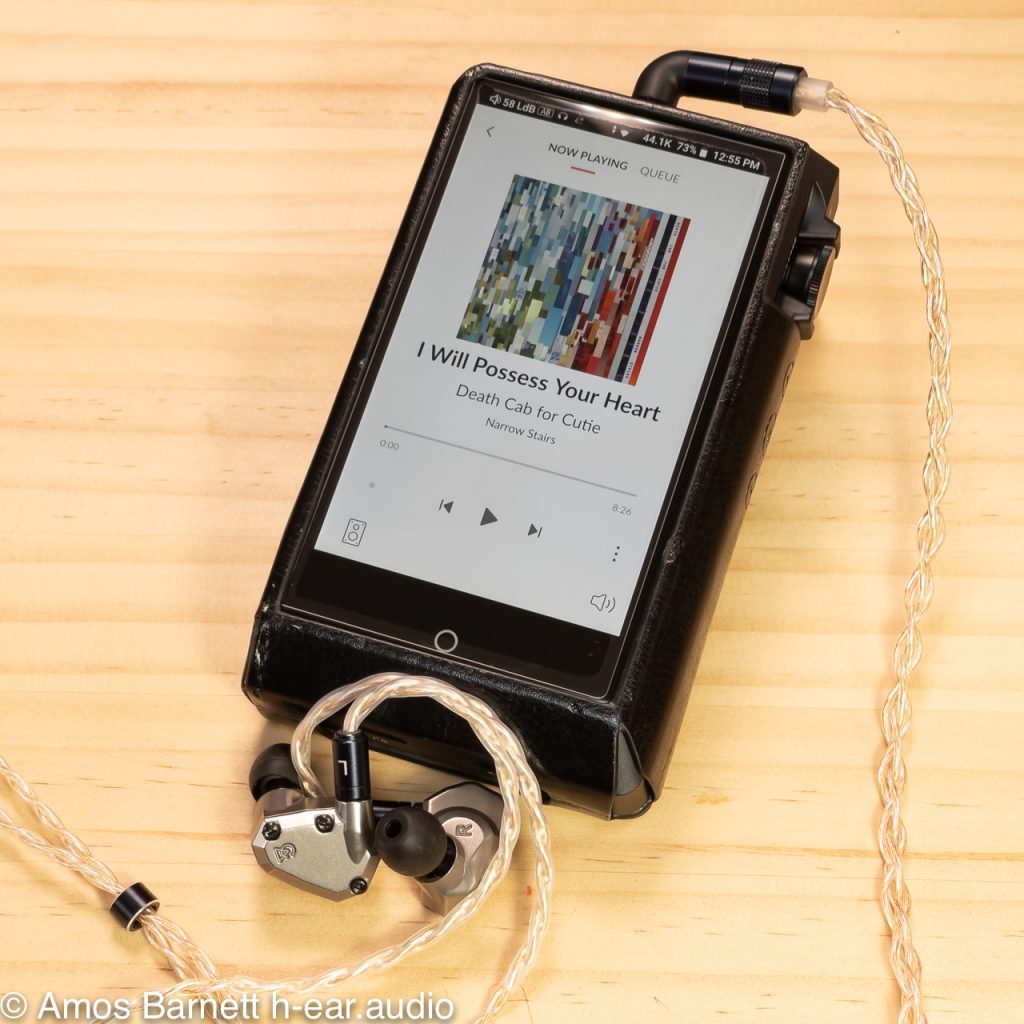 Initially, the idea of trying 4 DAC/amp modules was a bit daunting, but the character of each module became apparent quite quickly.

I tend to look at the subtle “flavour” of different DACs using what I call the “coffee table” analogy. It goes that while all coffee tables basically have the same function, the material used changes the feeling in the room.

Thus, the AKM 4497 and 4499 are rather like “glass” to me — clear and smooth, but like looking through a window, not the same as being outside.

The TI/BB 179x units are rather like wood, with their own character they bring to the sound that is a bit more organic, but depending on how the carving is done.

ESSTech DACs to me are more like metal — again, somewhat dependant on design, but with a solid clarity that makes one feel like there is more bass presence.

Each, in turn, fails differently in poorer implementations; the 179X sounding harsher, AKM duller, Esoteric flatter and more “grey”. Thus, implementation becomes key such that each brings out musicality rather than any of the negatives.

The N6ii is at such a level that Cayin’s experience shines through and each module, to me, exemplifies what each of these DACs is capable of, if there may still be levels of capability possibly from the top A&K DAPs that I haven’t experienced yet.

Starting with the A01 AKM 4497-based module, and it was still noticeably more capable of delivering detail through the better IEMs I have here than the FiiO M11 Pro, which is based around the AKM4497. Unfortunately an M15 was unavailable, likewise a Hiby R8 as they would have been more comparable. Typical of the AKM flagship, the sound was smooth and relaxed, and even if I liked it the least, I felt that the implementation was very good.

However, it was edged out for me by the T01 which seems to bring out more subtle details that the A01 would smooth over. That, in turn, brought out more musicality and more enjoyment. BB DACs tend, to me, to be somewhat YYMV — that is, when they are set up right, they can sound wonderful and musical, but harsh if not. The T01 module is definitely on the former side, bringing out the musicality in the music.

However, both were pipped by the E modules, but only very slightly. Of those, both have a well-executed tuning. Sabre DACs are divisive, and set-up wrong can either sound flat and “grey”, or sharp in a way that becomes annoying. When set up well, they have a slight sense of extended bass and treble. With the E01 and E02, much as the A01 elevates the slight dullness that the AKM DACs can be known for with a higher degree of clarity, the E modules bring the Sabre DACs up to the point of musicality, while maintaining the liveliness that Sabre DACs are known for.

The E01, as well, has the ability to switch between Class A and Class AB operation. With Class A, you get a more open, clear and precise sound. Class AB mode brings a marginally less precise, yet more “dynamic” and lively sound.

The E02 runs in Class AB, so you get a lively, up-front sound that is, generally enjoyable to listen with, without any harshness, though with a noticeable Sabre sharpness. Importantly though, it has a major benefit over the E01: Power. In exchange for reduced battery life you get a fully discrete balanced circuit that is, to a degree, more capable of powering full-sized headphones, and it really shows when you turn the volume up.

For example, FiiO’s M11 Pro, while ok at low to medium listening levels with full-sized headphones, such as the Meze Empyreans that I’m listening with as a write this, starts to get shouty as head towards maximum volume, showing the limitations of the amplifier. The N6ii with the E02 module has no such issues. While not as good as a regular desk system, it still manages to keep its composure longer with better headphone drive, the nuances in the music still apparent as the sound gets louder, where the M11 Pro will start to blur. 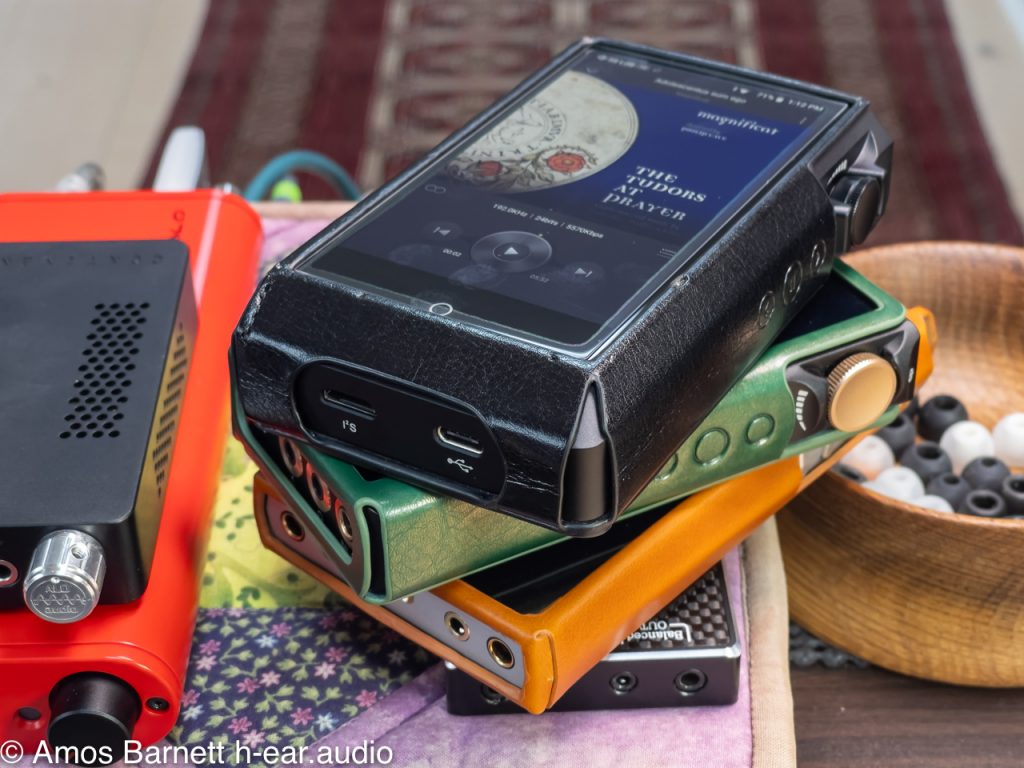 To put the N6ii in quick perspective, with the A01 module installed, it sounds like a more resolving M11 Pro, while maintaining the characteristic AKM 4497 “house sound” of glass-like smoothness. With what I perceived as more resolution from the T01 and the E01 and E02, it’s a clear class above the <$1000 DAPs that I have tried, including Hiby’s New R6 (2020 version).

The subtleties of even fairly regular music such as Marianne Faithful and Joni Mitchell were immediately more apparent with the N6ii versus both the less expensive M11 Pro and R6. Unfortunately I can’t get hold of similarly priced flagships, such as the M15, to compare. I’ll update this review if I do.

Against the tube-based N3 Pro, the N6ii has a more straight-up presentation, versus the warm and “tubey” effect from the former. The N3 Pro also loses a bit of detail, with the lower-end AKM4493 DACs, as well as not having an Android-based system. That being said, the N3 Pro is very enjoyable to listen with, if some instruments that require precision to render well, such as cymbals, don’t come through as cleanly as they do from the N6ii (from any module).

Against the Hugo 2, the R6ii, with any of the modules, doesn’t have magic ability of the higher-end Chord products to properly reproduce the depth of the music, both at the macro and the micro level, so the perceived soundstage is still more left-and-right than deep. However, for most music the difference is small. Enough nuance is available that, for the sake of convenience I would be more inclined to take the N6ii by itself than a Hugo 2 set up if the latter’s bulk would interfere more than the benefit the slightly better sound quality would bring.

A friend once briefly lent me an Astell&Kern AK380 and amplifier setup, both in a copper finish. This combination could, proverbially, do “everything”, but was huge, very heavy and bulky, to an insane degree. Cayin’s N8 manages much the same trick, if you don’t mind the weight and bling likewise.

However, the N6ii provides pretty much most of the goods without the insane bulk and weight (though is still quite a bit chunkier than your average DAP). It makes up for this with the ability to select a DAC/amp set-up of your choice, what it really excels in doing is sound good regardless of module chosen, especially the two discrete E-modules, and you know you’re getting about as good as you can get, sonically, from a portable player, without getting into the ultra-expensive top-of-the-line models. 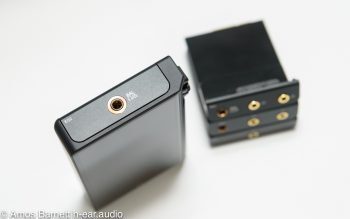 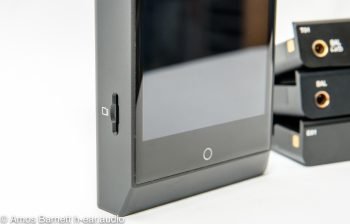 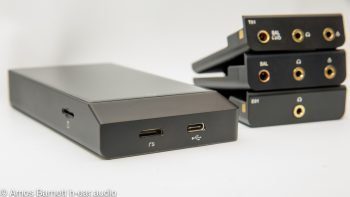 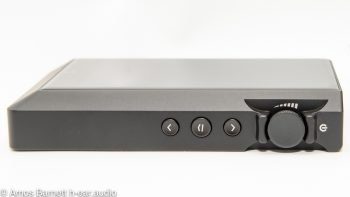 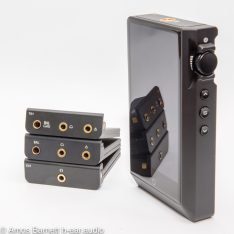 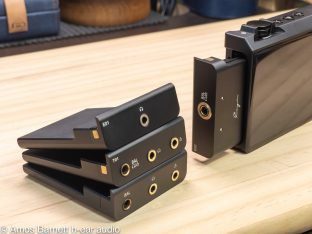 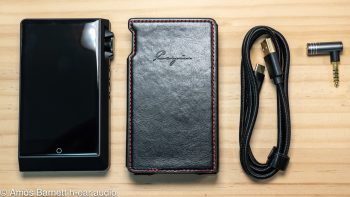 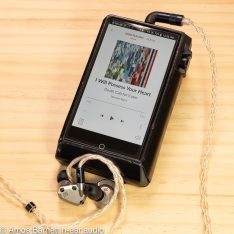 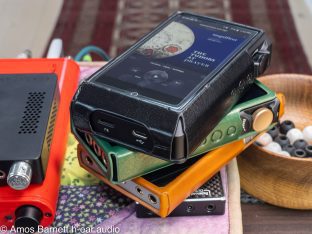