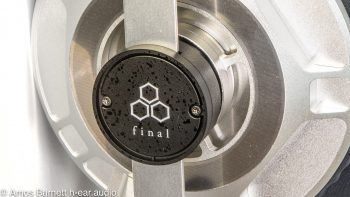 The Final D8000 Headphones from Japan 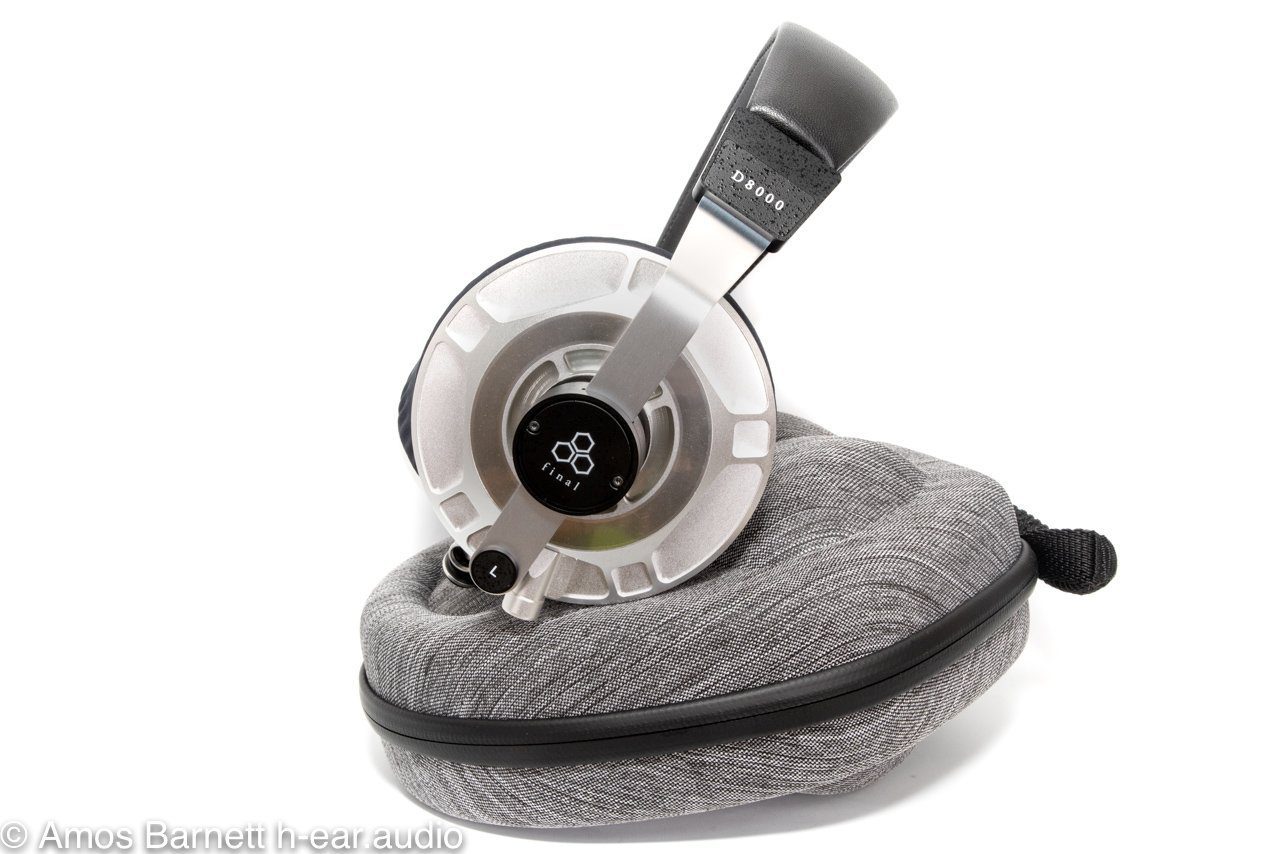 Every year since 2011, attending the twice-annual FujiyaAvic Headphone festival has been a must for me. I vividly recall the times I’ve met and talked with the staff of S-NEXT and Final and tried their headphones and IEMs. For many of those years, there was nothing particular that inspired me sonically, until 2017.

It was that year that I was invited to a press-only event to try out their new orthodynamic headphones, the D8000.

S-NEXT Final itself had undergone a transition since the death of its founder, Kanemori Takai, a man known for his unique ideas about how headphones and earphones should sound, resulting the Piano Forte series of IEMs, and the Sonorous series of headphones, both of which it would be polite to say sounded “unique” and had their own fans, yet many more people who neither liked nor “got” the ideas.

That Final had decided to design a pair of planar magnetic, or rather, orthodynamic headphones was certainly welcome. As the technology had been revived in 2009 by Audeze and HiFiMan, it served to revive the high-end headphone market alongside the Sennheiser HD800.

Electrostatic-driven headphones aside, as well as other unconventionally powered headphones like the Focal Utopias or Sennheiser HD800s, it is pretty much a given that a high-end headphone manufacturer has to use some form of planar (orthodynamic) driver technology to be taken seriously, let alone get serious performance.

Final had already been working with Yamaha on headphone designs, and consulted engineers who had previously worked for Sony on designing a new planar-magnetic flagship, to the point of building their own manufacturing equipment.

It was this equipment that was on display, alongside a prototype of the headphones themselves.

While I couldn’t say much from my brief listening experience at the press release, I could at least say that what I heard was conventional-sounding. Whether it would compete with other high-end designs, given that they were asking at least $3000 at the time, remained to be seen.

Some time later, and post-CanJam, I was able to borrow the D8000 Pro to review, but not the regular D8000. Now I’ve had the chance to listen with both, I’ve been able to gauge their strengths and their weaknesses versus each other and other high-end flagships. 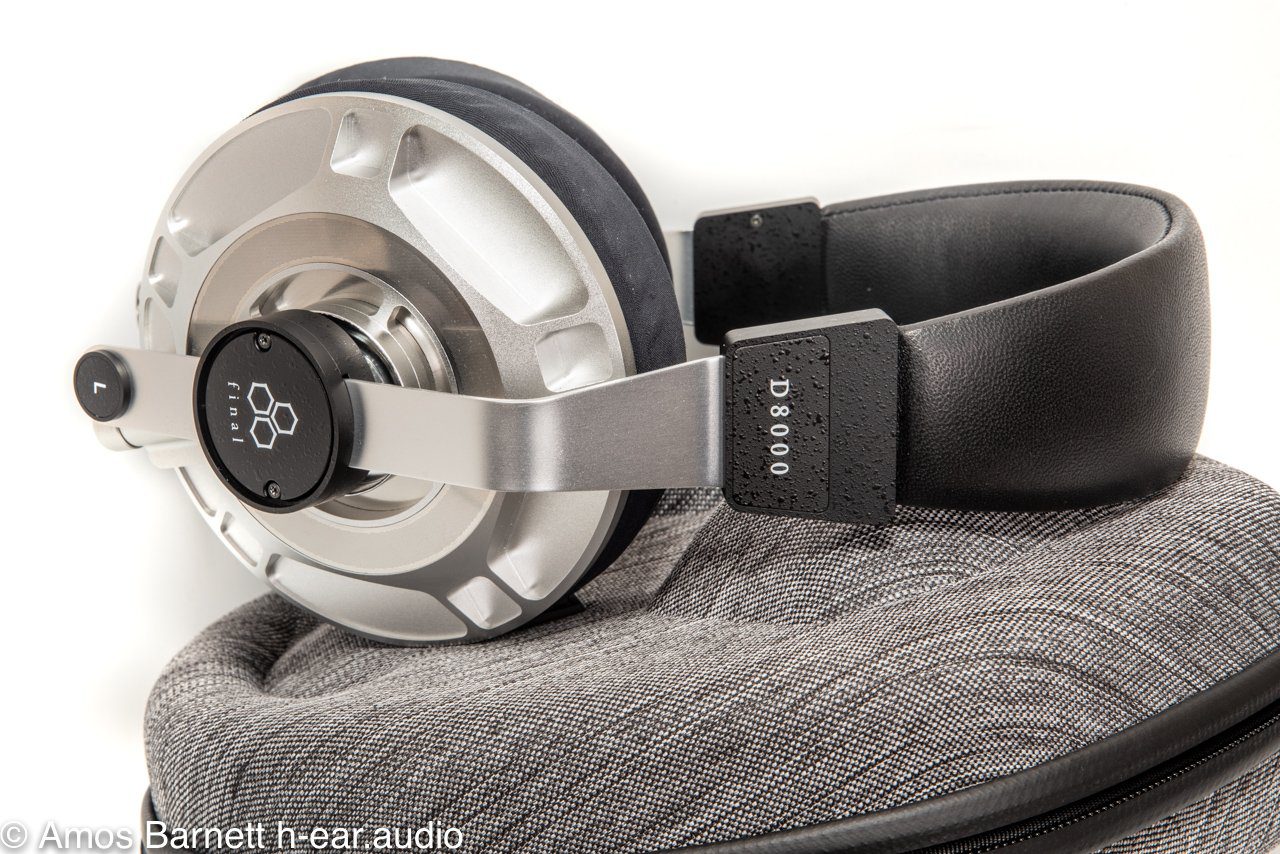 Build-wise, the D8000 and Pro combine an attractive, yet simple and slightly industrial aesthetic, using the same, simple combined headband and yoke system of the Sonorous series, yet with the unique aluminium cups designed for the planar drivers.

The earpads are cloth-covered foam on the D8000, and the Pro adds a bit of soft velour to the ear side. Not being ergonomically shaped as those on other headphones, they not quite as comfortable as an Audeze or Focal Utopia, and nothing quite matches the Meze Empyreans or a Sony either. The earpads press slightly unevenly on my head, even if the cups themselves are on a ball joint.

The ball joint also allows the cups a small degree of rotation, such that the cable entry points can be swivelled forwards or backwards (the cable can go behind you if desired!). This means that, along with no detents on the sliders, consistent placement on one’s head, for those few who require it, is not guaranteed.

Still, aside from being heavy, like any other orthodynamic, they are reasonably comfortable.

The D8000 and Pro come with a black cable with locking plugs which can be had terminated with a 6.3mm (1/4″), 3.5mm, 4.4mm or 4-pin XLR connector. The 3.5mm cable that came with the D8000 was shorter than the 6.3mm cable and had a non-collared plug that, while working with portable gear without issue, wouldn’t connect properly to the Chord TT2, as it’s socket was a tiny bit recessed.

The locking mechanism on the headphone end means that non-Final cables will require connectors with extended collars to fit correctly, unless you take them apart and remove the locking latches.

Speaking of which, the entire headphone is designed so that it is easy to repair, Final expressing their desire that the product be long-lived and designed with a degree of environmental responsibility. 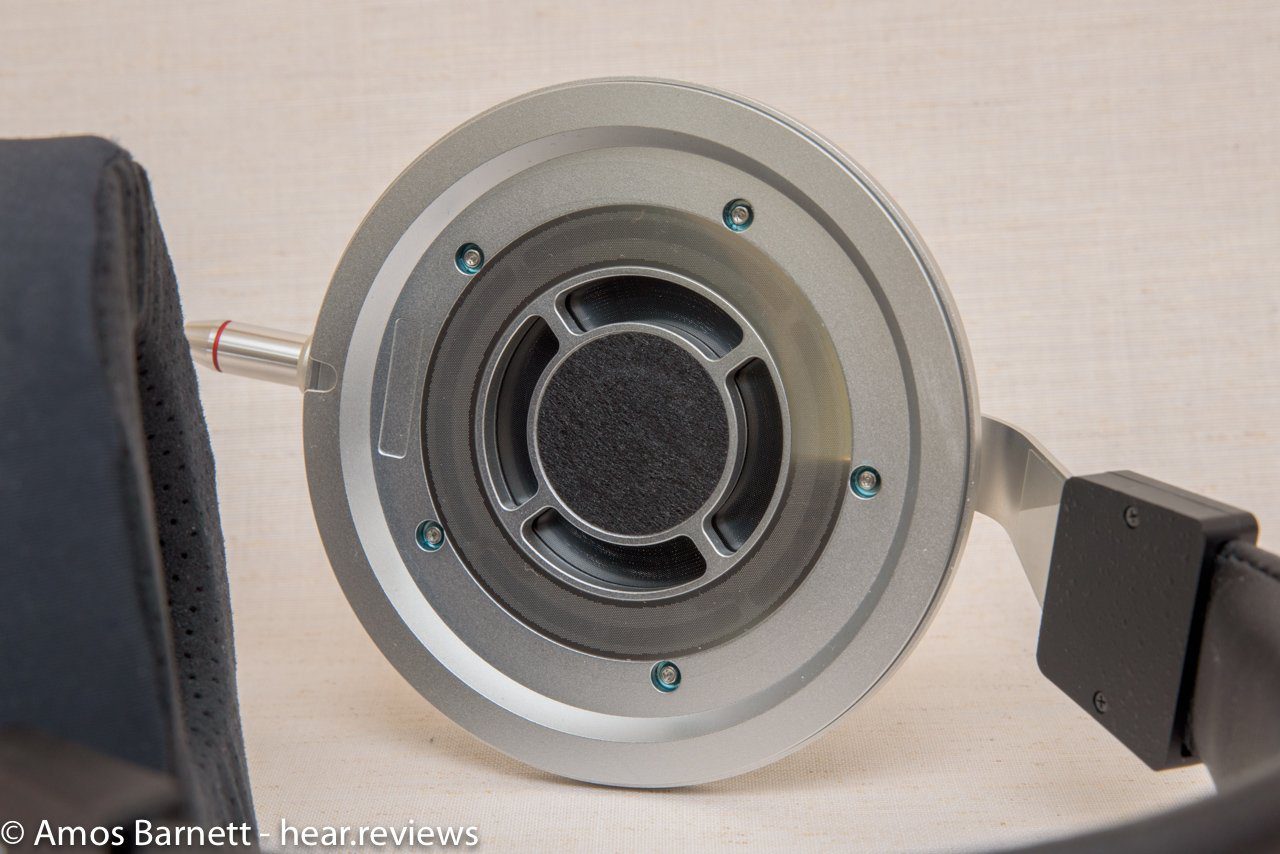 For the full details of the drivers, I’ll suggest reading Final’s web site, but in short, engineers from Sony, and, importantly, Yamaha, the latter of whom was responsible for the famous YH-1 orthodynamic headphones, were involved in the design.

Consequently, the D8000 and Pro have much in common with the old Yamaha designs, using a circular, full-trace driver. Being full-trace, the drivers don’t need to be as large as what we’re used to seeing from Audeze and HiFiMan.

To maintain efficiency, yet not have the driver strike the magnets at higher volumes, an air damping system is employed, consisting of plates with very fine holes on either side. Slight differences in these between the D8000 and Pro result in slightly different sound signatures. 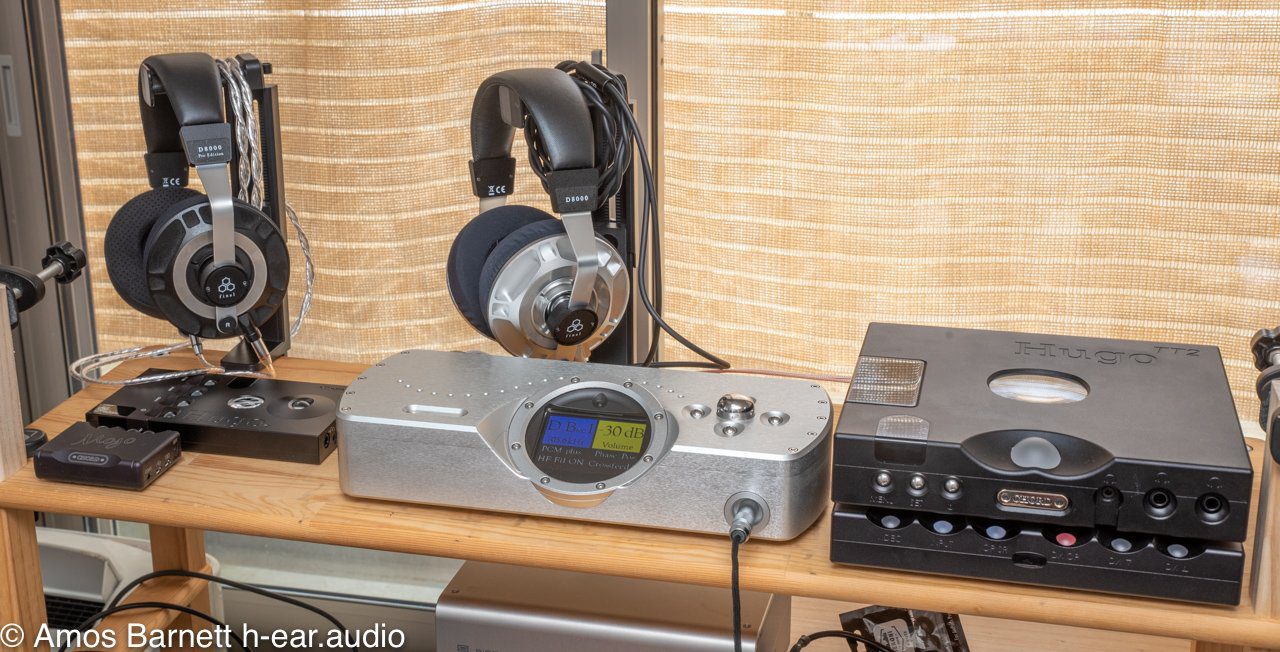 I was able to use both the D8000 and Pro from a variety of components, ranging from portable players up to a Chord DAVE and MScaler system. Their resolution was such that I ended up using the D8000 Pro as my benchmark for reviewing a variety of products in the last couple of years.

The primary difference between the D8000 and Pro version is that the latter has a flatter tuning, and is designed for higher volume levels. That tuning deviates from effective “flat” only in having a dip around the 4kHz mark, without which the sound, at least to me, would have too much upper-mid presense and hard to listen with.

That has the Pro sitting somewhere between the warm and bloomy Meze Empyrean, and the brighter and slightly bass-lean Utopias, which have that upper-mid strength that brings instruments more forward.

The standard D8000, on the other hand, adds some mid-bass bloom and pushes the mid-range back a bit for a more lively sound, if one that doesn’t emphasis instruments and vocals as much.

What is more remarkable is that the mid-bass bloom doesn’t overwhelm the rest of the sound at all, unlike with the Meze Empyrean. If there isn’t a lot of mid-bass on the track, it takes a step bak in that area. If there is a lot, then sometimes it can be a bit much, even if it doesn’t interfere with the resolution.

The other noticeable difference between the D8000 and Pro is in soundstage. The Pro has more of a wide, left-and-right sound, whereas the standard D8000 seems narrower in presentation, possibly as a result of the more recessed mid-range. However, it doesn’t sound as narrow as the Focal Utopias do out of the gear I have here.

For example, here are my impressions versus the Meze Empyrean and Focal Utopias (both with Norne Silvergarde cables) out of Chord TT2/MScaler. I used the better silver-plated cable with the D8000 and Pro in turn.

The Empyrean has a thicker sound, despite the cable upgrade. The D8000 brings on the bass without making everything sound thick, like the Empyreans do. The more precise sound does make it seems like the soundstage is more in your head with the D8000, but the overall effect is more refined.

I feel that the Utopias are better with the macro details of instrument impacts, seeming sharper initially, but the D8000 is more like how the MScaler affects the TT2 and DAVE, in that it brings out the subtle nuances with a smoother overall presentation. The D8000 also has that slightly greater bass that fills out the music a bit better sometimes.

I also feel that the Utopias’ narrower soundstage doesn’t separate out percussion as well.

The Empyrean, despite the thicker sound, punches the music more “in your face” as one thing, while the D8000 keeps each instrument more separate, only bringing in the bass when there is bass. The subtleties of each note from each instrument are more readily noticeable from the D8000.

The Utopias are deliciously precise. They seem to present the soundstage slightly more realistically, with more depth, whereas the D8000 are more left-and-right and a bit more spread-out, and the Pro even more so in that direction.

What impressed me the most about the D8000 is how it managed to have both an entertaining level of bass, yet do so without affecting their outstanding level of clarity. While for my preferences I prefer the Pro slightly, as I like my mid-range more, both headphones are on my list of recommendations for an end-game system, as they will scale with the quality of equipment they are used with.