Audeze LCD-R and Jotunheim A Review

“I want a girl with the right allocations Who’s fast, thorough, and sharp as a tack.”

— Cake, from Short Skirt/Long Jacket. Just substitute “girl” with “headphones” in this case.

It came from a discussion with Mark Cohen at Audeze. In the midst of discussing various aspects of the industry he asked if I wanted to review their new limited edition headphones, which they are calling ribbon headphones, even if they are essentially a low-impedance and higher-surface coverage version of their planar models.

They had paired up with Schiit Audio Mark, the details of which I’ll leave to Jason and Sankar to explain as they have or will. But the main point is that headphones of the type that the LCD-R are have a very low impedance of 2 Ohms, which is not far off shorting an amp, making them unsuitable for many, if not most amplifiers.

Style-wise, the LCD-R is differentiated from other Audeze headphones with fractal (Lichtenberg) wood rings. These are made by shooting precise pulses of high voltage electricity through pieces of wet Maple. This gives each pair a unique pattern. Aside from what looks like plated wiring under the grills on the back of the cups, the carbon fibre headband is shared with the LCD-4.

The Jotunheim A Amplifier

Jason at Schiit came up with a version of their Jotunheim R amp, designed for the RAAL ribbon headphones, but with lower gain, as the LCD-R are circumaural, compared to the open baffle of the RAAL model.

The resulting amplifier is the Jotunheim A, different in having a lower gain and the bass boost switch not boosting gain as it does in the Jotunheim R.

Like the Jotunheim R, the amp uses the same left and right and polarity-reversed pinout used by RAAL, along with a male socket. This prevents both the headphones being plugged into a regular headphone amp, which might damage it, and the amp being accidentally used with regular headphones.

Other than that, The Jotunheim A is effectively a small speaker amp, the LCD-R requiring mostly current, but not a lot of voltage, given their 103dB sensitivity.

I was lucky in that my Audio-gd Master 10 can handle 2 Ohm loads, and a kind person had loaned me their Chord DAVE for a month while they were on a business trip, so that I could both review it and give them feedback on the MScaler I have presently on loan. From that, I could sample the real potential of the LCD-R headphones.

But, back to the Jotunheim A. In combination, the LCD-R has what I would call a typical Audeze sound signature, yet with a jump up in sharpness and cleanness of the sound. Some owners have described their ability as being electrostat-like, which isn’t far off. Mark described them to me as being “smooth” and I’d probably say that they don’t have the slight edginess of the new LCD-XC Audeze sent along for me to review. More like the electrostat-like competence in delivery that makes regular headphones seem like an almost pretentious attempt at music reproduction.

Yet, from the Jotunheim A there was a bit of bass roll-off I felt, down in the lower registers, even if the LCD-R has that “planar warmth” with a bit of a bloom in the mid-bass and slight treble softness. It leaves them ending up being all about the mid-range and the pleasurable listening entailed by a highly-resolving design.

After checking with Audio-gd about the safety of plugging in a 2 Ohm headphone — lower will cause the protection circuit to cut in — I re-purposed a cable used for adapting the ALO Audio Studio Six for speaker use, replacing the 6.3mm plug with a 4-pin XLR female, and using a spare, regular Audeze-terminated Norne cable I had to hand, gingerly plugged the headphones into the Master 10.

Nothing bad happened. However, I had first tried this with the HiFiMan Susvaras, which are far less sensitive headphones, and forgot that the volume was quite a bit higher than necessary. Years of martial arts have left me with fast reflexes, so after a bit of a close call, I turned the volume right down on both the Master 10 and the Chord DAVE. 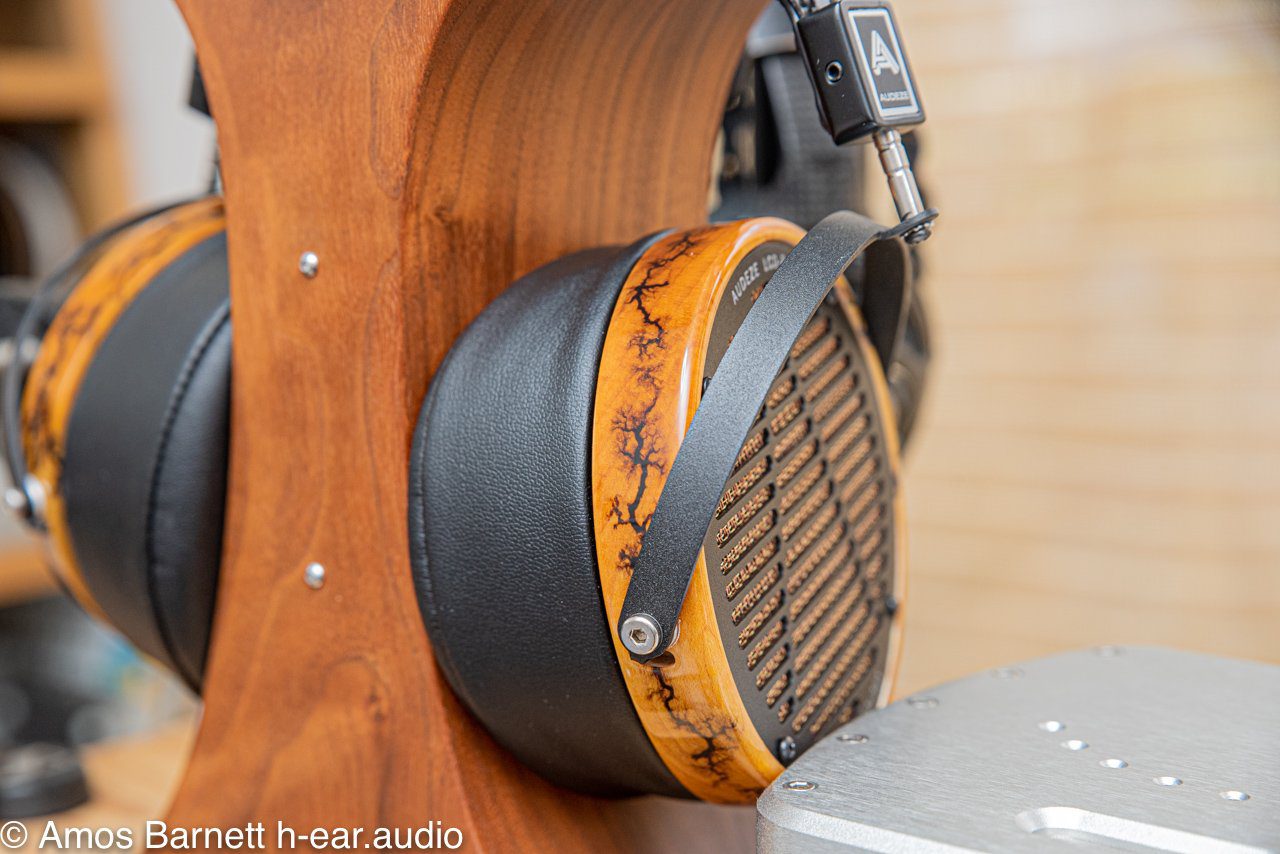 But then, things got serious. The DAVE and MScaler combination is one that, after some use, one gets accustomed to its perfection. Music sounds like music and you end up taking it for granted. On the other end, the LCD-R brought back memories of early LCD-2 usage, when I had the volume up a bit on a prior Audio-gd amp and when the music started, it felt like the band had dropped into my room, such was the sudden impact of it starting.

While the soundstage is still very much that of a pair of headphones, it maintains that Audeze characteristic of being just the right size — neither too big or too small, if still very much a bubble of sound more in your head than out. However, the clarity of everything from the tiniest sounds up to the most dramatic percussion after I’d left the Master 10 on a few hours was simply on another level of amazing.

I had managed to get some great sound from the Final D8000 Pro out of the DAVE, feeding the MScaler from a Kitsune Singxer SA-1 and switching power cables on the DAVE, yet Stephane (of the “A Non-Audiophile Listens to High-End Headphones” videos) and I both agreed that the LCD-R delivered Mozart’s Don Giovanni with that extra slam from the Master 10 set-up.

It was fun watching Stephane be wowed by the whole arrangement after having experimented both with his Luxman DA-06 and P750u which he’d brought around to compare other headphones with.

While the Jotunheim A made me want to grab the LCD-R for regular listening, out of the Master 10 it became an event. With a bit of a dip at around the 4 kHz mark is my usual preferred deviation from the close to flat frequency response of the LCD-R (a graph of which Audeze provided to me) if I can fault the headphones it is that the slight roll off in the treble, at least for my ears, slightly dulls instruments such as piano, and leaves the overall sound a touch on the “thick” side.

There’s nothing to fault in the realism of the piano on McCoy Tyner’s rendition of Lonnie’s Lament, yet the notes sounded a bit distant and muffled for taste. That, in turn, is balanced up by modern music, such as Radiohead, The The and Choir of Young Believers coming through with intensity without ever being fatiguing. Dawn Penn’s You Don’t Love Me (No No No) simply becomes fantastic entertainment as every aspect of the song is both shown in sharp relief and delivered with glorious precision, helped, of course, by the Chord rig.

I suspect it was Roon that suggested Yuko Mabuchi to me, specifically her album Yuko Mabuchi Plays Miles Davis, available on Qobuz and Native DSD. A good suggestion it was too, as the playing is excellent, along with the quality of reproduction. By the time it was on regular rotation for me, the DAVE had been returned and I was left with the TT2 and MScaler. Recalling that the TT2 had been designed to work with low-impedance speakers, I chanced the LCD-R from the rear outputs using the same adaptor I had made for the HiFiMan Susvaras.

As with the Master 10, nothing bad happened — on the contrary, Yoko Mabuchi was delivered deliciously, with the volume all the way down between -40 and -20db in low gain! After Yoko Mabuchi on my #152 playlist comes Van Morrison’s rendition of Moondance from his album of the same name.

A little louder than the proceeding album, Van Morrison’s vocals jumped out with a glorious liveliness. Keep The Streets Empty For Me by Fever Ray (artist and album) likewise was smacked into my head with glorious precision. Beck swooning on Beautiful Way on Midnight Vultures is likely fantastic. The slight edginess of his voice comes through clearly amongst the rest of the music.

Remembering that my ALO Audio Studio Six, shelved to make way for other gear, was designed for sensitive speakers as well, I brought it out, dusted it off, and got a reminder why I loved the amp so much — for its sheer, effortless speed with planar headphones, even if there is a touch of transformer hum in my one-off (as far as I know) 100V version.

When the time came to part with the LCD-R, I knew what I had to do, and bought the set. If there’s one unfortunate thing about the LCD-R, it’s that they are limited to 67 sets worldwide. The $2500 asking price, including the amp, is insane value. According to Audeze, the entire run sold out within two hours of going live.

I recall one buyer of the LCD-R and Jotunheim A set selling them without listening to them. He wisely realised that he would not want to sell them if he experienced what they are capable of. I can only say it will probably be quite a while before the speakers are connected to my Master 10 again. Now what can I sell to be able to afford the DAVE…