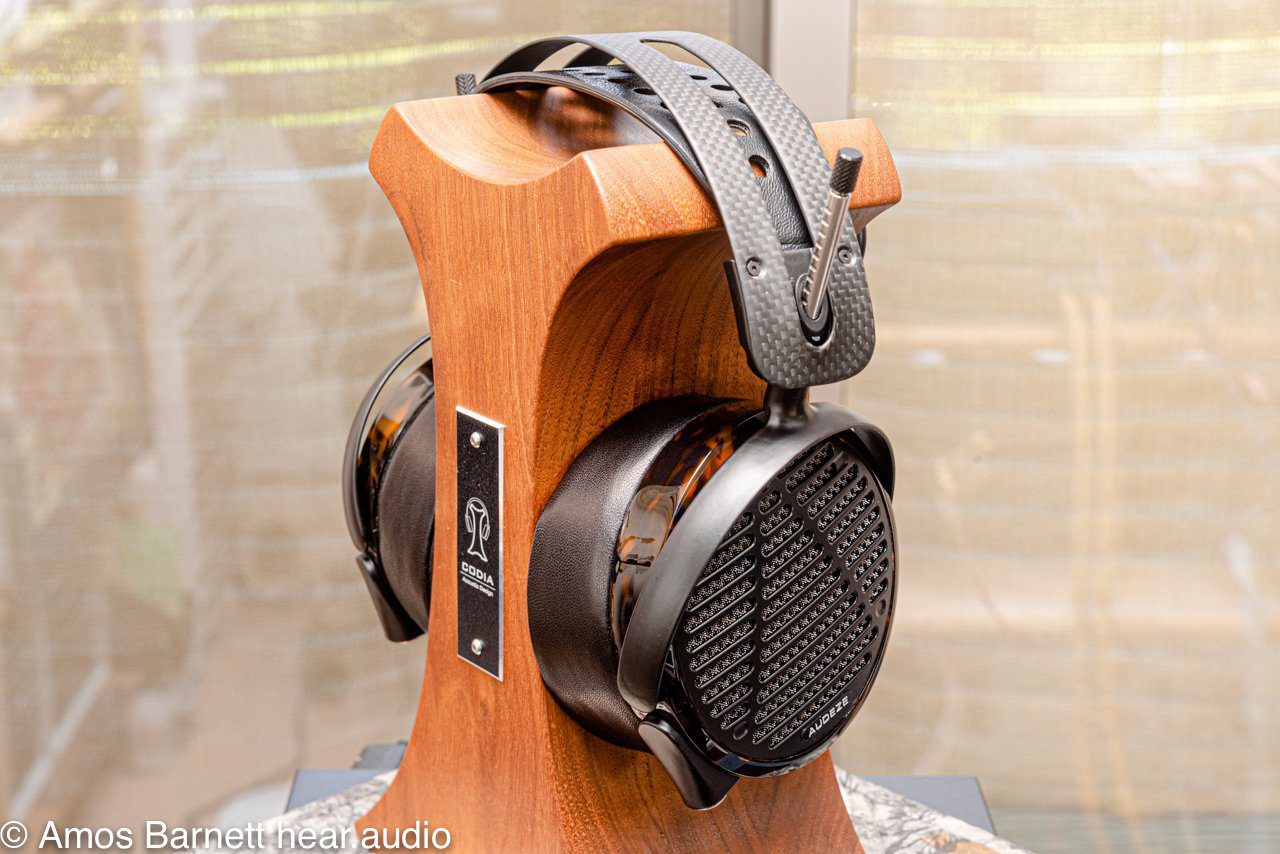 Audeze today announced the LCD-5 headphones, their latest flagship. While at first glance they look like a typical pair of Audeze headphones, the LCD-5 are in many ways a design revolution, with fundamental changes to the design that, among other things, make them lighter.

At 420g, picking them out of the included carry case (for which white gloves were included) it was a surprise to find how light they are, as well as how significantly smaller than the regular LCD headphones are. Unlike previous models, the LCD-5 uses a lot of magnesium, such as for the yoke and grill and the headband is made from Carbon fibre.

The headband has a neater and more modern adjuster, albeit one that clicks just as firmly as that on the LCD series adjusters always have.

For decoration, a tortoiseshell acrylic ring stylises the cups, something which was entertainingly difficult to capture well. The ear pads are concave, unlike those on previous models, providing a slightly different acoustic chamber around ones ears. This, with a slightly firm pressure has been initially a bit uncomfortable. I think I shall be leaving them to stretch across one of my (relatively thin) ELAC speakers.

Included with the LCD-5 is the same high-quality, tightly braided copper cable that the LCD-R cable with, albeit terminated for a regular headphone amplifier.

Head-Fi has published measurements of the LCD-5 on their Youtube video which show a fairly “flat” sound signature (once you account for the mid-range peak that compensates for the lower sensitivity to this range in our ears).  As with my impressions, the sound is a bit forward in the 3 kHz area, something that matches the measurements. This pushes vocals and some instruments somewhat aggressively forward.

This results in a sound that is similar, if not quite the same as the pair of 2021-revision LCD-XC Audeze sent me, and more so like the well-known Sennheiser HD-650 (and HD6XX). However, the LCD-5 is more refined than the LCD-XC (and very much more so than the HD-650) with more noticeable separation of instruments and vocals in the soundstage, especially during busy music passages, which I observed while listening through a Chord Hugo TT2 and MScaler.

With a little low 90 dB/mW sensitivity and equally low 14 Ohm impedance, it will be interesting to see how well the amplifiers here drive the LCD-5 and what works best. Not to mention, how they compare to other flagship headphones. For the full review, don’t forget to keep an eye on this site.